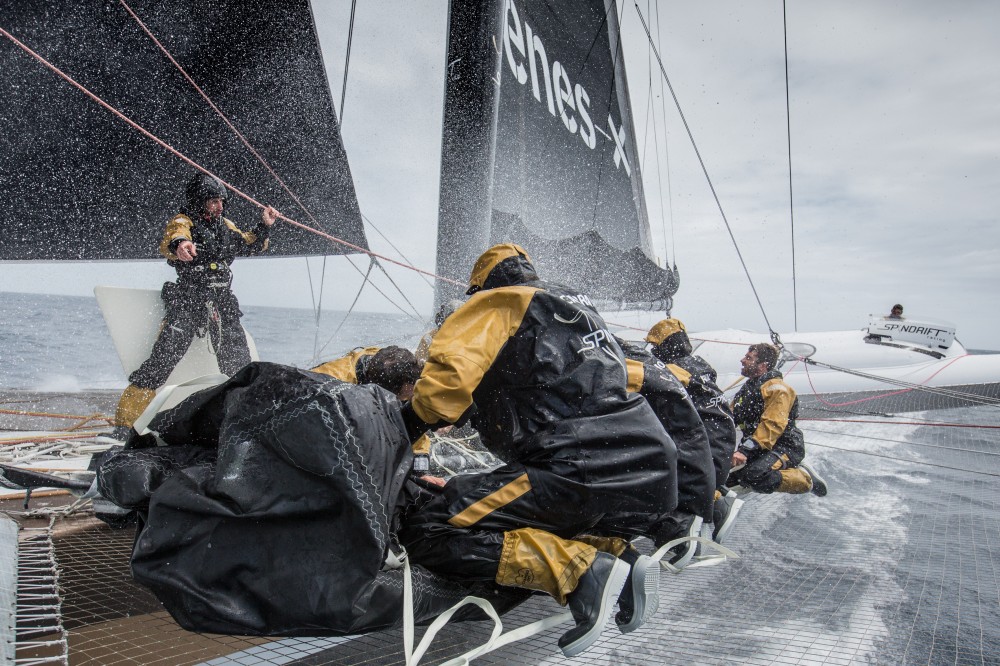 On board Spindrift 2 during the Jules Verne. Photo Yann Riou/Spindrift.

The trimaran skippered by Yann Guichard crossed the longitude of the Cape of Good Hope, the first of the three great capes of this round-the-world voyage, last night at 02:06 GMT and Cape Agulhas, the symbolic entry into the Indian Ocean at 04:04 GMT. Spindrift 2 has taken 12 days and 02 minutes to descend the Atlantic from north to south since leaving Ushant on November 22 (average speed 27.64 kts). The difference to the record time on the Ushant–Cape Agulhas section, set four years ago by their predecessor and the Jules Verne Trophy holder, was 12 minutes and 44 seconds.

Spindrift 2 now has to negotiate the Indian Ocean, an ocean renowned as the toughest, most extreme and the most dangerous, although it is the shortest section of this round-the-world voyage (at approximately 5,000 miles). It is an ocean that will begin calmly for Dona Bertarelli, Yann Guichard and their 12 crewmates, because an anticyclone has crept under the south of Africa. This area of high pressure, with moderate north-westerly winds, will temporarily slow the progress of the black and gold trimaran, however, it should find the averages of above 30 knots again with the strengthening breeze off the Marion and Prince Edward Islands.

From a lead of more than half a day when crossing the equator in a record time for the Jules Verne Trophy, Spindrift 2 has lost almost all its advantage in descending the South Atlantic, because of a storm front off Brazil. But for the last three days, Yann Guichard and his crew have been driving hard (700, 800 and 820 miles a day) at the head of a warm front, and crossed the virtual trajectory of Banque Populaire V on Thursday at 1500hrs (GMT) by a margin of about thirty miles. Already at 47° South, Spindrift 2 is expected to continue on this east-south-east trajectory for a few hours before settling at around 52° South and pointing at the Kerguelen Islands, the halfway point on the road towards the next cape, Cape Leeuwin, about six days away.

But this Indian Ocean crossing looks complicated, with two weather variables to negotiate: the presence of icebergs and drift ice off the coast of the Kerguelen archipelago and the arrival of a tropical depression descending quickly from Madagascar. They will need to constantly take the safest path to avoid the growlers (blocks of ice weighing several tonnes), and to position themselves ahead of the violent disturbance that will “cross the road” just after the Kerguelen Islands.

“It's got a little bit cold because we're in the process of going down south, but everything’s good on Spindrift 2. For the last three days, we’ve been at the head of a depression, which left Argentina with a strong wind: it's a bit like as if we were surfing on one wave. But we couldn’t fall off because then we would’ve missed the train to the Cape of Good Hope and lost at least a day on the record time set in 2011. Yesterday (Thursday), we covered almost 1,500 kilometres in 24 hours (827 miles between 02/12 and 03/12 at 1300hrs GMT, better than Banque Populaire V, whose best day on this section was 812 miles): it was quite wild, but tonight, it’s calmed down a bit. We’re still descending in latitude in order to look for another weather system.”

“We’re already at 46° South and the water is no more than 6° C. And in a few hours, it will be 2-3° C. The next 24-48 are pretty important from a strategic point of view because there are quite a few icebergs in our path and we’re still going down to 52° South. We have satellite images that allow us to detect them, but we only see the big ice floes that are over a hundred metres long. This means that there are growlers around (blocks of several tens of metres in diameter, or even less). So, when we detect a big iceberg, we’ll give ourselves a safe margin so as not to cross these dangerous areas.”

“These next five days will not be easy with the cold (2-3° C), moderate wind, and a continuous vigil for fear of icebergs. We do have infrared goggles that allow us to see the ice from a few hundred metres away, but still, we’re going at nearly 60kmh (37mph).”

“Banque Populaire V (the holder of the Jules Verne Trophy) was very fast in the Indian Ocean, but even if we are a bit behind south of Australia, we know we can catch up, virtually, because they lost nearly two days in the Pacific. We should pass the Cape of Good Hope almost at the same time as the record holders, after about twelve days at sea: Spindrift 2 is still an exceptional machine to do the Atlantic in so short a time.”