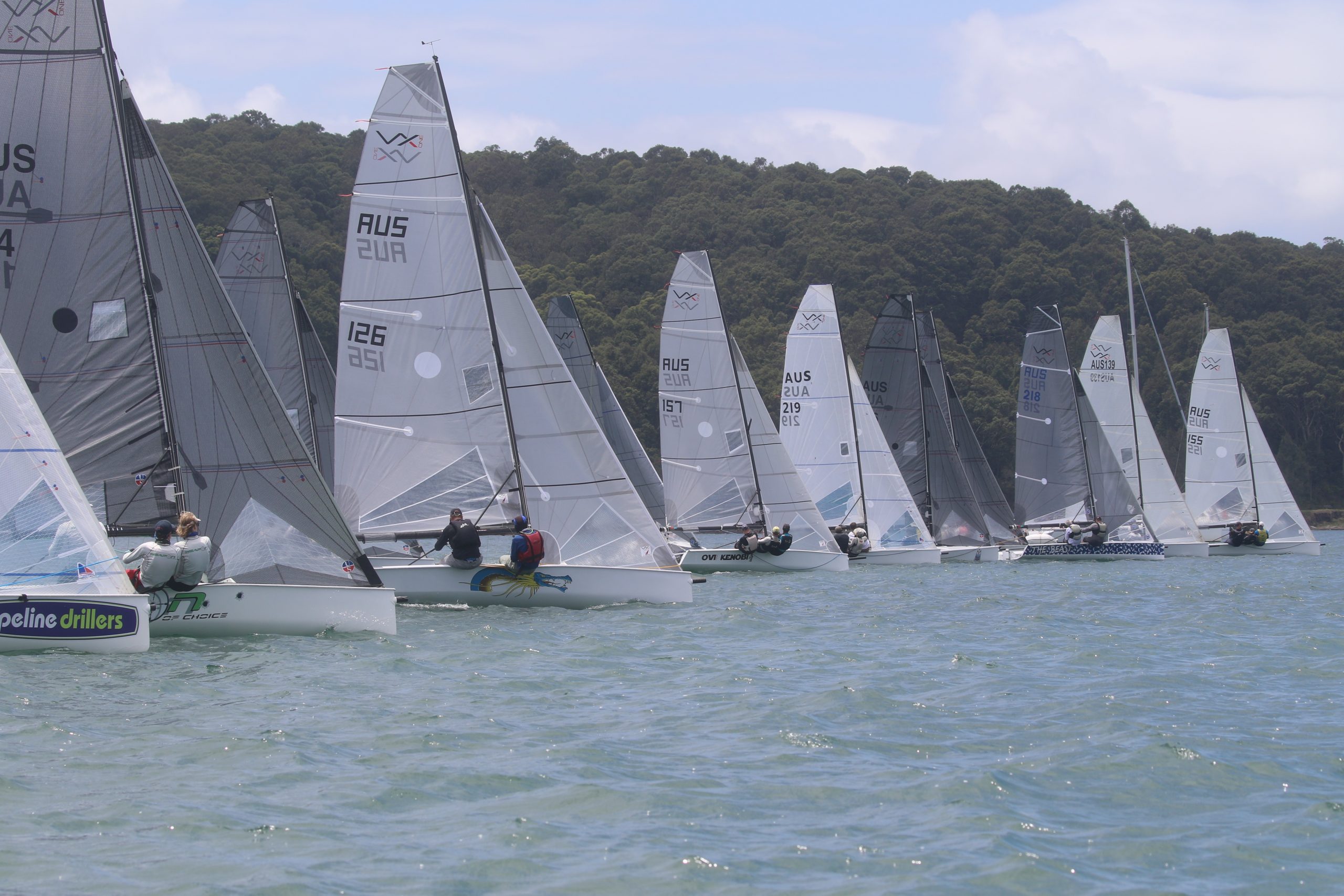 Twelve VX Ones rigged their up on the hardstand at Lake Macquarie Yacht Club on Australia Day 2017 for their fourth national championships. The VX Ones would be sharing the track with a fleet of Adams 10s also sailing their nationals. All yachts were in the capable hands of PRO Phil Yeomans for the regatta.

The eight boat fleet at RQYS had sparked the interest of Tom Siganto who was the 2015 29er World Championship winning crew. Tom chartered a boat and enlisted his good friends Charlie Wyatt and Ben Vercoe to crew for him. Ash Brunning who had recently purchased a boat called on his former AST team mate and Laser Gold Medalist Tom Burton along with Jess Reynolds to crew for him crew.

The breeze was forecast to be quite light for the first two days but ended up being better than expected. Two races were sailed in an 8 to 12 knot Sou-easter on day one. Speedwagon helmed by Andrew York won both races from Tom Siganto’s The Best. Both these boats were quick upwind and also managed to make big gains on the rest of the fleet downwind in both races.

Day two was a little lighter at 5 to 10 knots from the south east again. Yorky and Tommy took out first and second again in the first race and reversed the order in the second race. Supervax 24/7 helmed by Brett Whitbread led the third race from start to finish with Yorky staying in front of Tommy and managing to put Michael James in The Beast between them just before the finish.

Going into the last day Speedwagon crewed by Yorky’s school friend from the 70’s, Anton Lynar and Felix Prince a 15 year old local held a four point lead on Tommy with Brett a further 7 points adrift and just one point in front of Ash Brunning’s Old Mate.

On Saturday, the final day, after waiting an hour on shore for any wind the seabreeze started to fill in. The last two races were sailed in 15 to 18 knots with everyone enjoying speeds of 16 knots plus downwind. Yorky broke the start of the first race and had plenty to do after returning and restarting. Brett led at the top mark the first time but could not hold off Ash with Tommy coming in third.

Ash led for all of the final race with Brett second and Alan Moffat’s Ovi One Kenobi third. Tommy had squeezed Yorky out at the start but he recovered to finish just one place behind Tommy in the race and beat him by two points in the regatta. Ash’s two wins put him into third for the regatta one point in front of Brett.