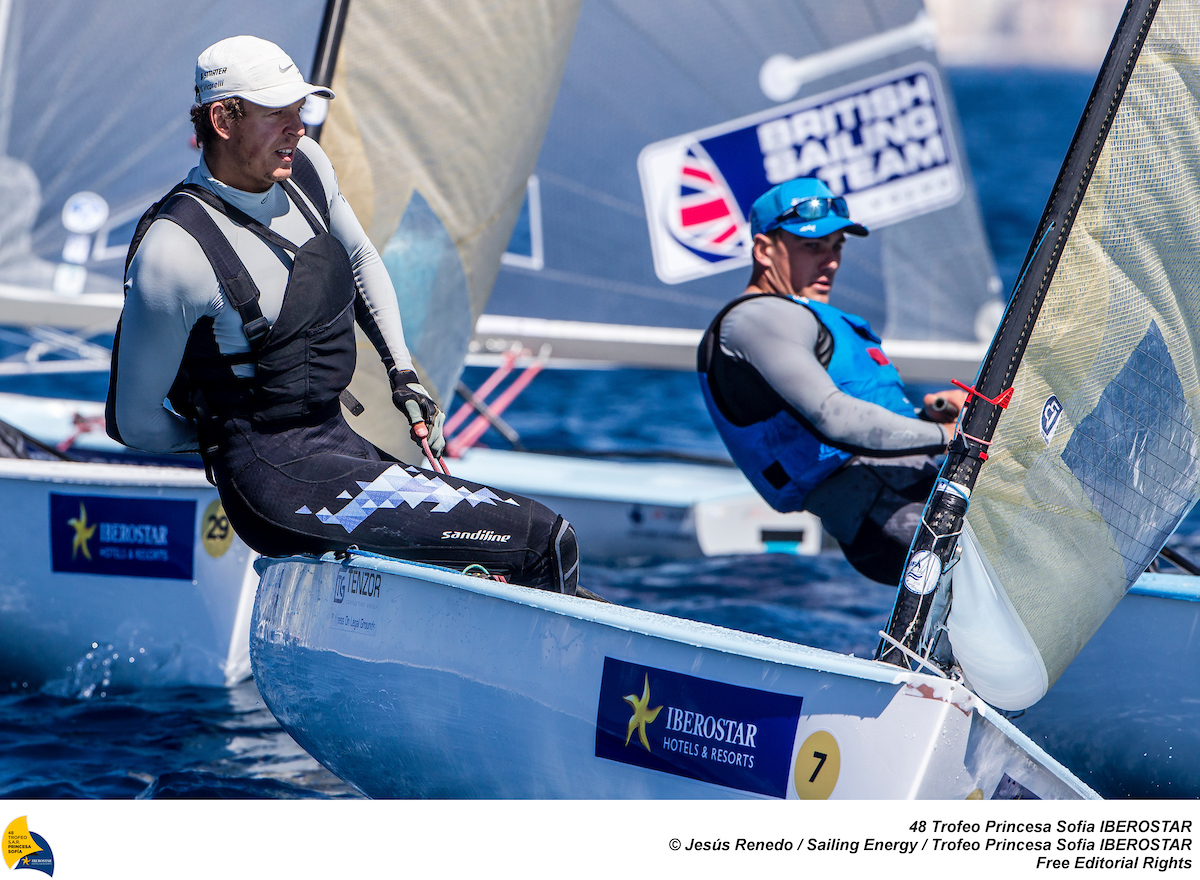 Denis Karpak continues to lead the 48th Trofeo SAR Princesa Sofia IBEROSTAR in Palma after two more races on Tuesday in slightly lighter conditions. Dutchman, Nicholas Heiner is up to second while Race 4 winner Max Salminen, from Sweden, is up to third.

The first race of the day was won by Hungarian, Zsombor Berecz, from Alessio Spadoni of Italy and Piotr Kula of Poland. Max Salminen of Sweden, then won the second race from Alican Kaynar, of Turkey and Ondrej Teply, of the Czech Republic.
Berecz explained the day, “The forecast said no wind for today, but it was sunny without clouds, so the sea breeze came in. The first race was 7-10 knots. On the first upwind there was only one good line in the middle left and who got it was in the front all the way. The Italian [Spadoni] was leading all the way, but on the last downwind they let us have free pumping and I managed to pass him.”

“In the second race I had a bad start and I rounded 38th. I was climbing back all the way and finished 22nd.”

For many of the Rio 2016 sailors, Palma is their first major regatta since the Olympics, after taking a well-earned break. Some will return in Hyeres in a few weeks time.

Berecz said that after the Games he took a long rest. “I was fishing a lot with my friends and also my daughter born in November. I started training again in mid January.”
For others it is the first step on the long journey to Tokyo. One of those is Nicholas Heiner, now in second overall. In his first major European Regatta Heiner is already posing a strong challenge after a winter of training and learning. He jumped into the Finn at the end of 2016 and has been training hard to be ready for this season.

“The transition to the class has been really good so far. It’s a new challenge, and I am learning a lot, especially on the sails and the mast development. I think that in general the boat feels quite similar quite similar to Laser sailing, technique wise, and gives me a lot of new energy. With Rafa Trujillo coaching, with all of his knowledge, it has been going really nicely. It’s been a steep learning curve over the last five months.”

On the day in Palma. “It was a really nice sea breeze day. When we came out the breeze was really far right and stayed for first half hour and we had two general recalls. After a little postponement the wind started to shift. So during the first beat the left side became more and more dominant. And after that the left side always paid, and for sure there was an interesting moment in the first race, first beat, when it looked like first off that the right was good and then it started changing, and luckily we had a hold on that one, and I think we had a really nice first race. In the second race I didn’t have a very good start and managed to crawl back from 16th to eighth so really happy with the day.”

Heiner remains to be convinced about the new format being tested this week. “We need to look at it at the end of the week, but my first impression is ‘What are we doing?’ Try to explain this to the sailors and we don’t really understand what we need to do. But so far we are just fleet racing and we’ll see at the end of the week what we think about it, but my first impression is very doubtful.”

Berecz added, “About the format I cannot answer now. If I’ll be in top three I will love it. But it opens up the game for sure.”

The opening series of the ‘game’ is now at its half-way stage. The goal here is not necessarily to win, but to survive to the later rounds. Racing in the opening series continues until Thursday. The Semi-Final Qualifier will be held on Friday for everyone not already qualified for the Final or Semi-Final. Then the eight-boat Semi-Final and the five-boat Final will complete the series, with the first across the finish line being the winner.