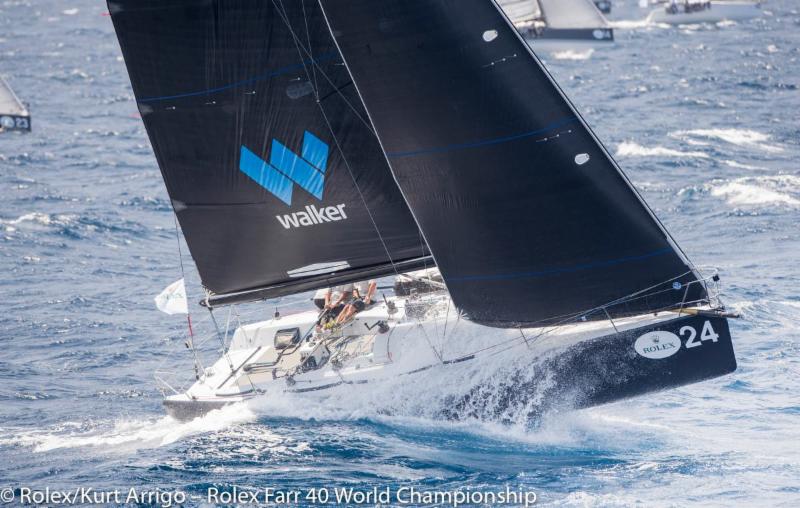 Some of the most spectacular venues in Italy will comprise the 2017 International Circuit for the Farr 40 Class Association.

With the Rolex Farr 40 World Championship already scheduled for Porto Cervo in July, class organizers have announced two additional regattas that will serve as perfect complement.

The Farr 40 Class will participate in Rolex Capri Sailing Week from May 10-13 then make the short trip up the west coast for the Gaeta Open, slated for June 8-10.

“Capri and Gaeta are two stunning locations and make a lot of sense logistically,” said Geoff Stagg, longtime manager of the Farr 40 Class Association. “Rolex Capri Race Week is an iconic event and we are very much looking forward to going back there. From a practical point of view, Gaeta was the perfect stop for the second event since it is located in between Capri and Porto Cervo.”

Farr 40 racing has been part of Rolex Capri Race Week in the past with the European Championship being held there on a couple occasions. Yacht Club Italiano will provide on-water management with the legendary Peter Reggio serving as principal race officer on the Farr 40 course.

“We are excited to welcome the Farr 40 class back to Rolex Capri Race Week,” said Carlo Croce, president of the Yacht Club Italiano. “The Farr 40 class will be in the spotlight and an important aspect of the regatta.”

Croce said competitors can expect consistent winds in the 8-12 knot range and calm waters on the Mediterranean Sea during that time of the year.

“Capri is an incredibly beautiful island and the sailing conditions tend to be spectacular. This is an event our owners are very much looking forward to attending,” Stagg said.

Gaeta, an historic seaport dating back to Roman times, will be hosting the Farr 40 Class Association for the first time. Officials with the Yacht Club Gaeta are very enthusiastic about welcoming one of the world's most successful classes.

“We highly recommend the Farr 40 sailors bring their families as there are so many interesting tourist activities here,” said Luca Simeone, owner of the Yacht Club Gaeta. “It is an amazing city with so much history and many lovely beaches. There is so much to do here both culturally and socially.”

Racing will mostly be held on the Gulf of Gaeta, which features a reliable sea breeze that begins to fill in around noon and usually brings 12-18 knots during the spring. Boats will be berthed at Base Nautica Flavio Gioia, which is celebrating 50 years of activity. This family-run marina boasts 250 berths and is capable of handling maxi yachts. A full-service boatyard is located on the adjacent property.

“A big boat regatta of this nature was something missing from our list of events,” Simeone said. “Our members are very excited to see Farr 40 racing, which is some of the best competition in the world.”

Last year's International Circuit, which included events in Croatia and Italy, attracted several new Farr 40 programs. Rush Diletta (Mauro Mocchegiani), Sempre Avanti (Carlo Naibo), Pazza Idea (Pierluigi Bresciani) and MP30+10 (Luca Pierdomenico) were among the Corinthian entries that gave the professional teams all they could handle.
“The Italian fleet is getting stronger and that is great news for the class as a whole,” said Alberto Rossi, owner of Enfant Terrible.

Claudia Rossi will be competing against her father during the 2017 season as she is slated to drive Pazza Idea. Alberto Rossi was pleased with the addition of Capri and Gaeta to the circuit.

“Capri is one of the best locations in all of Italy and the Rolex Sailing Week is a great event. I have sailed there before and am happy to be going back,” Rossi said. “I have not been to Gaeta, but I understand it is a nice place for sailing. I am confident we will find nice conditions there.”

Rossi steered Enfant Terrible to the 2013 Rolex World Championship and is eager to regain that title. Business commitments prevented Rossi from attending the 2016 worlds in Sydney, Australia, but he did lead Enfant Terrible to victory at the D-Marin Sibenik Regatta last year.

“When we did the California circuit in 2015 we had a really fast boat. So we want to start from where we left off in Santa Barbara,” said Rossi, who will have long-time tactician Vasco Vascotto and his regular crew aboard for all three events of the 2017 International Circuit.