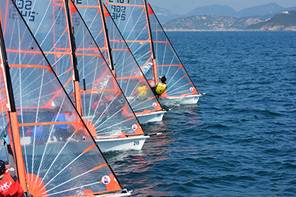 Royal Hong Kong Yacht Club today announced the release of the Notice of Race for the Zhik 29er World Championship 2018.  Eligible skippers are invited to apply for entry to this premier event.

For the 18th edition, Royal Hong Kong Yacht Club expects a large fleet, capitalising on it's off-season scheduling for the northern hemisphere and the close proximity to sailing communities in Australia and New Zealand. In preparation for the 29er World Championships the Pre Worlds event will kick off on 27 December 2017.  Early interest has already been registered by teams from Australia, Great Britain and Germany.

As a World Sailing recognised one-design class and one of the few sailing disciplines where competition is not segregated on the basis of gender, the 29er is the largest asymmetric class in the world; having global appeal as a double handed skiff with fractional spinnaker and trapeze. Youth sailors are drawn to its speed and handling, with the 29er class being raced in over 30 countries worldwide.

The 2018 event will represent the first time that the 29er World Championship has been organised in Asia and it is hoped that this will encourage the development of the class in the region. Emerging 29er nations India, Japan, Singapore and Thailand are also expected to attend, together with the more traditionally established fleets from Australia, Europe and the USA.

Race Chairman for the 2018 29er Worlds, Peter Backe, is enthusiastic about the early interest in the build up to the event: “We are very excited to host the 29er World Championship in 2018; Hong Kong will be first Asian city to stage a 29er World Championship. There has already been great interest from teams around the world and we can't wait to put on a great show here in Hong Kong. We will make sure there will be challenging and fair racing run by our World Class race management teams. When not racing, there will be time to enjoy our beautiful yacht club facilities in the heart of Hong Kong.“