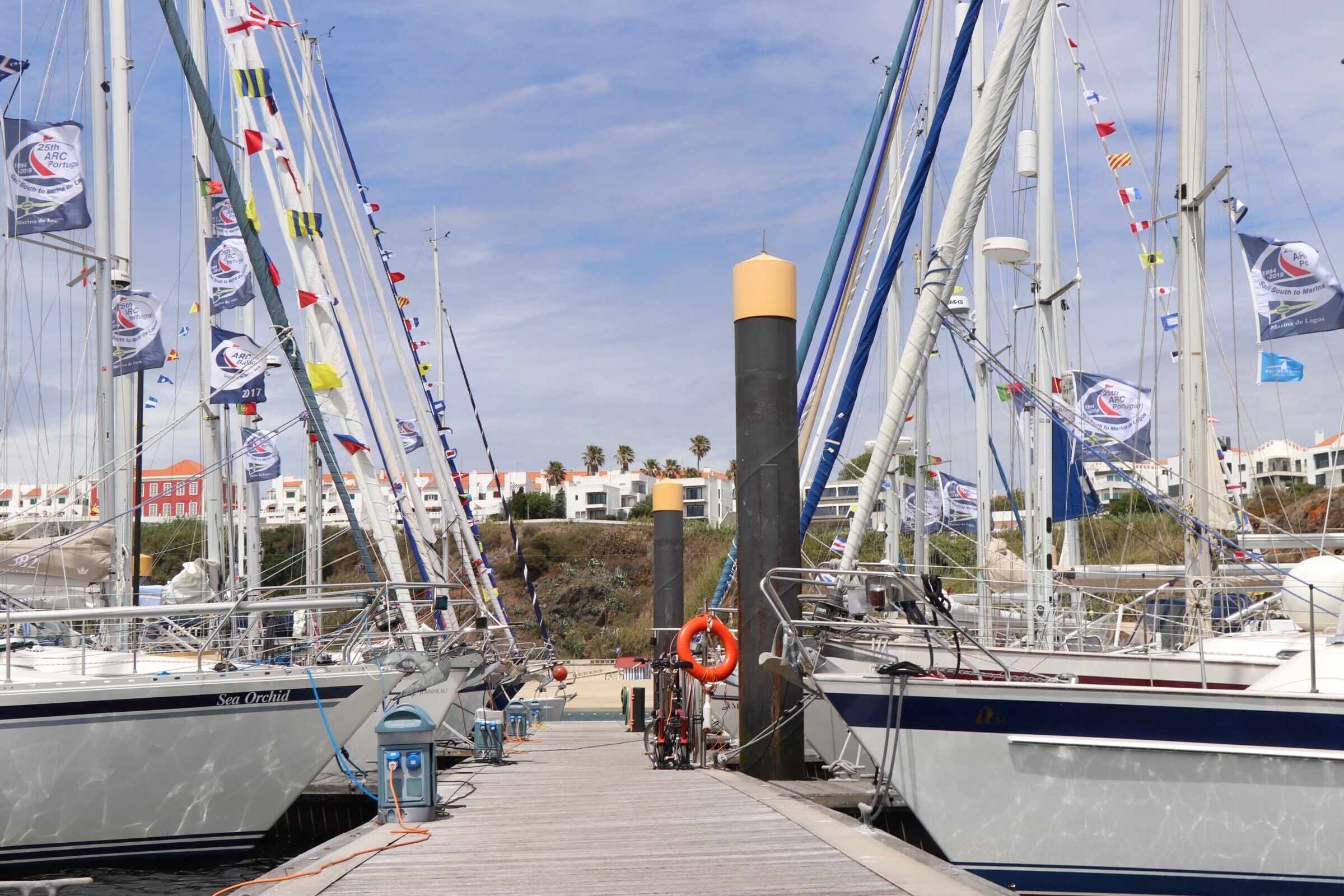 Right from the beginning, ARC Portugal 2019 was going to be an extraordinary sail south; as well as being the 25th edition of World Cruising Club's multi-stage sailing rally, this year marks 25 years since the Marina de Lagos, sponsor and final destination port for the rally, opened in early July 1994.

Good cause for a double celebration as ARC Portugal 2019 concluded yesterday at the marina where a total of over 500 yachts arrived as part of the rally over the years.

For the crews on the 18 boats in the 2019 edition, it has taken almost four weeks of sailing, months of preparations and years of planning to reach the pontoons of southern Portugal; a great personal achievement and yet another reason to toast to a successful finish of the rally.

Assembling at Mayflower Marina in Plymouth at the end of May, little did crews know quite how their adventure would unfold.

The pre-departure program quickly set the tone of support from rally organisers World Cruising Club, but also from amongst their fellow crews as everyone prepared for crossing the Bay of Biscay for the first stopover in Bayona.

All World Cruising Club rallies are designed to be a social and safer way of sailing to destinations, with the idea of knowing there are other rally boats in the vicinity whilst at sea.

ARC Portugal often attracts crews who are venturing on their first real experience of longer distance offshore sailing, aided by the experience and support of the rally team.

“The camaraderie and social side of the rally is not to be underestimated – we have certainly met lifelong friends and sailing companions through this experience,” said Jonathan Farrow from the Moody 376, Diablito.

Judy Aslett, of Hans Christian 48T Fair Isle agreed: “It's been an excellent adventure. We’ve met some lovely people and some really experienced sailors to help those less experienced.”

Departing on schedule from Plymouth on Sunday 2nd June, crews waved goodbye to England's shores and headed off to complete the coveted bucket-list item of crossing the Bay of Biscay.

The weather for ARC Portugal this year has been unusual, starting with the unexpected and fast developing Storm Miguel, during the latter part of the Biscay crossing.

Whilst most boats reached a safe haven and avoided the passage of the storm, there were a few who remained at sea. They made passage away from the predicted track of the low and had a few uncomfortable hours hove-to, before continuing to make landfall in Bayona.

Sustaining the theme of ARC Portugal 2019 being anything but a 'typical' cruise south, conditions continued to be very different from normal June weather, and frustrating when making passage to their destined Marina de Lagos.

The day sails south along the coast of Portugal to Lagos, normally characterised for excellent sailing in the northerly Portuguese trades, were a mixture of light airs, southerly winds, and on one occasion thick fog. There was some good sailing, the leg from Peniche to Oeiras being the best of the coastal sails this year.

Days at sea may not have been textbook cruising, but the itinerary of ARC Portugal 2019 has supplied some unforgettable experiences ashore. For this reason, the rally is always referred to as 'much more than a delivery trip', sharing the diverse and fascinating culture of the Iberian coastline with an extensive program of organised tours and social events.

From visiting famous sights in Santiago and Coimbra, sampling port wine in the cellars of Porto, experiencing the gracious hospitality of the Mayor of Figueira da Foz at Quinta das Olaias, and enjoying celebratory evening at the Casino da Figueira, there have been some great rewards to joining the rally.

“ARC Portugal has made a long relocation voyage so much more enjoyable,” said Colin Prebble skipper of Beneteau Oceanis 400 Aurora.

Reaching Marina de Lagos, manager Ingrid Fortunato was delighted to see the smiling crews of ARC Portugal and hear their tales. “The arrival of ARC Portugal to Lagos marks the start of the season in the marina, when we receive a fleet of enthusiastic and passionate sailors that arrive as a big, tightly-knit family,” she said.

“Every year, ARC Portugal brings Marina de Lagos more boats and sailors, and the marina shares its treasures with them – the protection from the conditions, weather and Portuguese hospitality. We love to receive them and they love to arrive here; it's a special two way relationship.”

Andrew Bishop, Managing Director of World Cruising Club, and founder of the rally, commented, “Arriving in Lagos it is always a pleasure to bump into previous participants, many of whom have made Lagos their cruising base, and in some cases their home.

“Within in a few hours of arriving this year, I met participants from the 2002 rally who have only spent four years away cruising out of the last 17, and another couple who arrived with the 20th ARC Portugal in 2014, who have been based here ever since and now have a house in Lagos where they spend three months a year.

“Yesterday I met a crew from a previous rally who has settled and started his own marine business here in Lagos. These are typical of the stories one hears from previous participants, and goes to show why amongst cruisers locally, that Marina de Lagos is known as Marina Velcro. Once you are here, it is hard to leave!”

With the 2019 edition now concluded, crews will also be looking forward to their future cruising plans, enjoying the Algarve, exploring the Mediterranean, or cruising back north to re-visit some of the rally ports.

They will take with them many memories from this special event, and no doubt build on the friendships and camaraderie that has developed from their month long cruise south together.