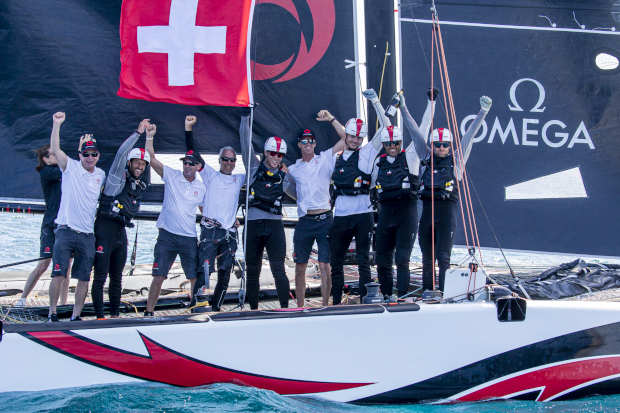 Having looked secure, leading by 16 points going into the last day, Ernesto Bertarelli’s Alinghi team, helmed by Arnaud Psarofaghis, scored a 2-1-1 in today’s first races to win the 2019 GC32 World Championship with two races to spare – an incredible result given the calibre of competition racing here off Lagos, Portugal.

“I feel very happy – although it hasn’t sunk in yet,” said Psarofaghis. “It was a really tough week of racing. The shore team and the guys on board did a fantastic job. We only had two bad races out of 17. It was a perfect job by the team – to win with two races to spare is great in this kind of fleet. With Team Tilt second, it is a great day for sailing in Switzerland.”

Having lost two races to light conditions yesterday, there was concern this morning when the forecast northwesterlies disappeared, to be replaced by fickle southeasterlies. Fortunately the prevailing offshore winds did re-establish shortly after 1300, allowing the day’s full five race schedule to be completed in exceptional conditions culminating in a final race of the Championship in winds gusting to 20 knots.

Aside from Alinghi, the Sébastien Schneiter-skippered Team Tilt also had an exceptional day. They starting out with a convincing win in the first race. Then across four more races they scored no results worse than a fifth, including the third race when they successfully pulled off a port tack start on the fleet. Having started the day fourth, this consistency elevated the defending World Champions, assisted here by Emirates Team New Zealand skipper Glenn Ashby, to second overall.

“We quickly learned what we were doing badly and well, improved every day and just sailed better and better,” said Schneiter. “The first day cost us a lot, so recovering to second was probably the best we could hope for. I am pleased the whole team fought for every point. They kept believing. It shows a good spirit in the team.”

INEOS Rebels UK claimed the final position on the podium although only by a point and in possibly not the manner skipper Ben Ainslie would have preferred, including two collisions for which the British team picked up three penalty points. “We were quite aggressive and pushed it a bit too hard and got caught out!” acknowledged Ainslie. Remarkably after the second of these incidents – going for a space at the start of race four between CHINAone NINGBO and the race committee boat, that left them trailing in last position – the British America’s Cup challengers went on to win the race. “It is quite often the way with this fleet that you have a bad start, peel out and get free from the rest of the fleet and come through,” Ainslie continued. “You just get clear air and a lane. It was a tough day, but our last couple of races were solid.”

Franck Cammas and NORAUTO also had an exceptional day posting all podium finishes, bar one and winning the final race. “One of the crew from CHINAone NINGBO fell in the water in front of us – we stopped and stayed to keep an eye on him,” recounted Cammas. “After that all the boats behind us gybed and went direct to the layline.” At the time they had been holding third but the incident caused them to end the race eighth. “So we lost the podium when that happened,” said a resigned Cammas. “We enjoyed today a lot, especially the last race.”

As some consolation, in recording the fastest average speed on Friday resulted in NORAUTO winning the Cascade Sopromar Speed Challenge and the prize of five double rooms for three nights at Lagos’ 5 Star Cascade Wellness & Lifestyle Resort.

Finishing sixth overall and winning the Owner Driver prize at this GC32 World Championship was the longest standing GC32 team – Argo of American Jason Carroll that came out ahead of Erik Maris’ Zoulou. “It was very exciting – it was pretty unstable so there were a lot of position changes all the way around the race course,” said Carroll of today’s racing. “We had moments of brilliance today, but no particular day was brilliant. I really enjoyed our 4-3-2 on the second half of the first day when we were all working well together.”

After a strong first three days, Oman Air had a disappointing final day that caused them to finish fifth while the Roman Hagara-steered Red Bull Sailing Team led race four until they were overhauled by INEOS Rebels UK. Even GC32 newbies Christian Zuerrer’s Black Star Sailing Team were on the ascent today, posting a fourth and third in the final two races at this, their second ever GC32 event.

But this GC32 World Championship belonged 100% to Alinghi. As Team Manager Pierre-Yves Jorand stated: “Being GC32 World Champion with such as great team is fantastic. Maybe the points don’t reflect it but in the on-the-water battle every single metre counted. This is the culmination of several years spent on this type of boat. The sailors sailed very well, the shore team prepared the boat very well. The opposition was fantastic. The venue was great. The local authorities and organisers have been fantastic with us to solve small issues. Having 18 races in such great conditions was really amazing. It has been a beautiful event. I am very happy and very proud of the entire team and the whole support team here and in Switzerland.”

The 2019 GC32 World Championship took place with the support of the City of Lagos, Marina de Lagos and Sopromar. The GC32 Racing Tour now moves on to its third event, Copa del Rey MAPFRE in Palma over 31 July to 3 August.