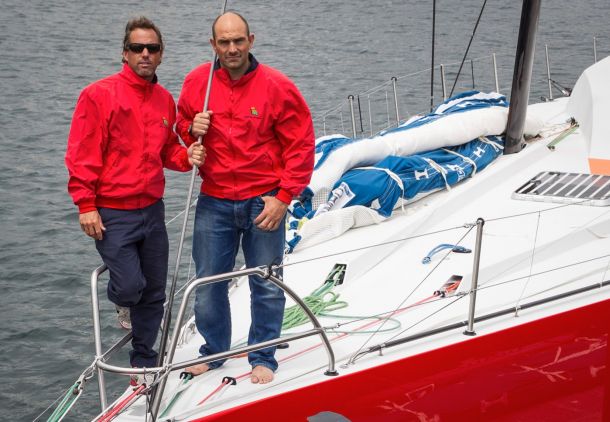 ALICANTE, Spain, July 4 – Spain’s new entry for the Volvo Ocean Race 2014-15 arrived in its home country this week as offshore sailing’s biggest event began its 100-day countdown to the start on October 4.

Iker Martinez and Xabi Fernández, who spearheaded Spain’s Team Telefónica challenge in 2011-12, sailed the new Volvo Ocean 65 the 650 nautical miles down the English Channel and through the Bay of Biscay to their training base in Galicia, Spain earlier this week.

The Spanish challenge was only announced last month and is now playing catch-up with the rest of the six-strong fleet preparing for the Alicante in-port race on October 4, which marks the start of the event.

Martínez and Fernández, former Olympic champions and Sailors of the Year, now have the task of assembling the crew for a boat that has yet to confirm its skipper or its main title sponsor.

Team Alvimedica, meanwhile, will be announcing their line-up next week (July 7) in their home port of Newport, Rhode Island, but successfully completed their naming ceremony there at the weekend when former U.S. surgeon general Dr Regina Benjamin did the honours.

Three days after their crew announcement, Team Alvimedica will join Abu Dhabi Ocean Racing on a transatlantic trip from Newport.

The Emirates-backed team headed by British skipper Ian Walker are already in competition shape following a very successful trip across the Atlantic in 10 days.

The crew revealed they worked in full race mode with freeze-dried food, dishes rinsed with saltwater and the sailors only brought one change of clothes.

After publicly announcing their race crew squad of 10 in Lorient, France last Thursday, Dongfeng Race Team’s mix of four Chinese, five French and a Swede went back to the gym and inshore training this week.

The Chinese quartet has extra classes – English lessons – to add to their preparations for the race start and ensure communication goes smoothly when the real competition commences.

Team SCA’s all-women crew have finally been given a break from training in Lanzarote but with the fitness schedule and instructions they received before leaving, it is not much of a holiday.

Their onboard reporter Corinna Halloran explained: “We are on a conveyor belt – a very exciting one. When we get back in 10 days we’ll go through all sorts of tests including a blood one. So if you’ve been on a bender for the past week, they know it immediately. After all, you’ve got 100 days to be your ultimate you.”

Team Brunel are, meantime, preparing to return to Lanzarote. The Dutch team have been spending the last month in the North Sea where they have visited Dutch, German and Danish ports.

They depart The Netherlands on Saturday and should arrive in their training base at the Marina Rubicon around July 13 or 14.

“I can feel in my stomach that the race is getting closer,” said crewmember Gerd-Jan Poortman. “We are ready to go back to Lanzarote with a new energy.”