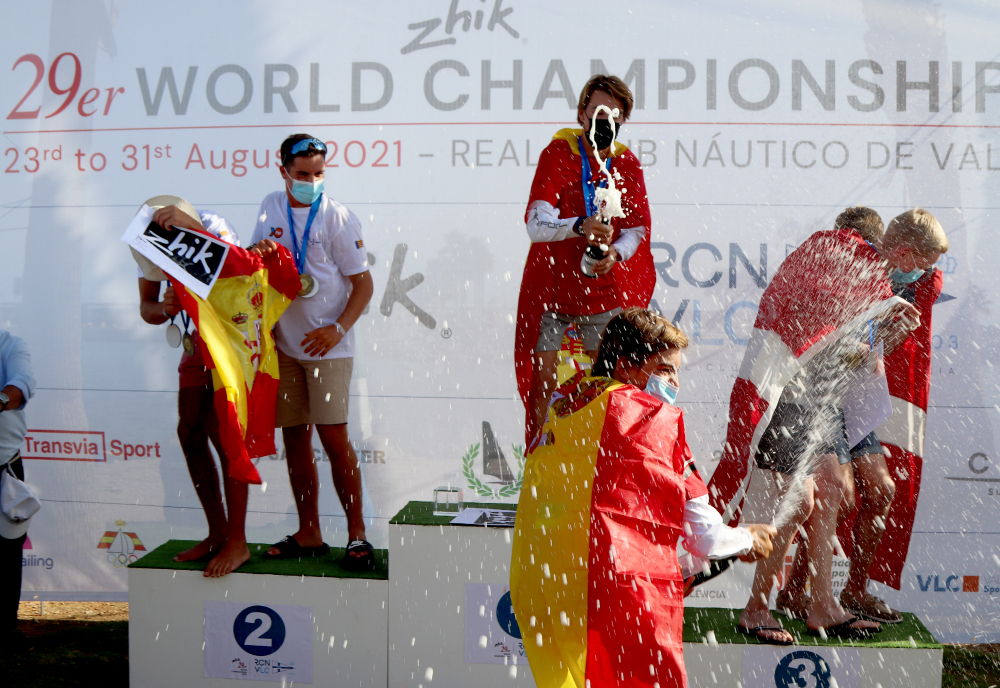 Spanish sailors shone at the Zhik 29er 2021 World Cup in Valencia, which brought in 193 sailors from 24 countries.

The last day was an emotional roller coaster to say the least. Quicorras Urios and Filippo Benetti (RCN Valencia), who yesterday were off the podium, managed to fight their way up to second place overall.

Simón and Mateo Codoñer (RCN Valencia) won the event and the U17 category. The Codoñer brothers, current champions of Spain, were careful not to take too many risks going into the last day of competition in order to secure the top prize.

The pair said, “We have made many friends, many foreign people and let’s see if in the future we will meet again. As we have won at home, they have made us a pretty cool celebration, they have put us on the boats and it could not be the truth more welcoming, we are very lucky to be brothers, and in the end we support each other a lot, in the good times and the bad times, and sports, sailing.

“Being brothers we get along much better, everything we decide, we both think the same, and it helps us a lot because since we are from the same family, our parents support us a lot and I think it is the best thing we have done.”

Silver went to Urios and Benetti who finished with 61 points, seven points behind the Codoñer brothers. Bronze went to the Danes Jens-Christian and Jens-Philip Dehn-Toftehoj, with 65 points. As for the women, Chloé Revil and Nell Castilla from France came away with the win, followed by the Danish, Rebekka Johannesen and Slije Cerup-Simonsen, while bronze went to Paula and Isabel Laiseca (RCN Gran Canaria).

In the U17 category, the Codoñer brothers were joined by the French Hugo Revil and Karl Devaux, silver, and the Germans Carl Krause and Max Georgi, bronze. The female U17 category was won by Martina Lodos and Martina Díaz-Salguero (RCN Gran Canaria), followed by the French, Caroline Pennetier and Fleur Babin, and then Alja Petric and Katja Filipic from Slovenia.

Spain won the Nations Cup title, which recognizes the results at the global level of all national representatives who have participated in the World Cup.

For the full results, see: http://rcnv.sailti.com/en/default/races/results