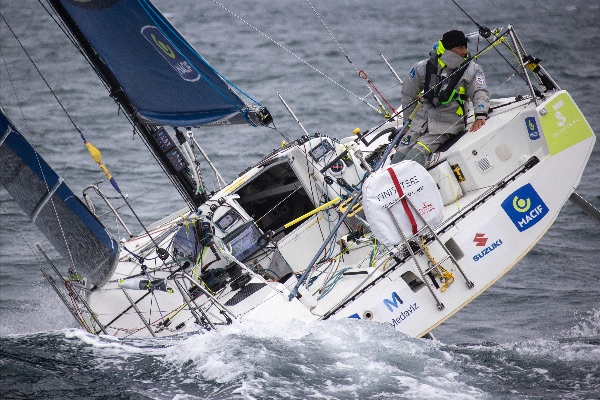 Xavier Macaire (Groupe SNEF), the French skipper who last Thursday conclusively won the marathon first stage into Lorient was this afternoon battling to get back on terms with the leading peloton of the 52nd La Solitaire du Figaro’s Stage 2, a 490 nautical mile race from Lorient to the Channel port of Fécamp.

Macaire appears to have seen the 47 minutes 15 seconds advantage that he started the leg with evaporate when last night he had to dive over the side of his Figaro Beneteau 3 to release a fish pit from his keel. The incident occurred just before 2230 hours when he was tacking upwind in a 20 knots North Easterly breeze some eight miles off Roscoff.

Lying in fifth at the time, Macaire was 1.3 miles behind Stage 2’s leader Pierre Quiroga (Skipper MACIF 2019). When he had unsnarled himself he had lost a couple of miles but most importantly was no longer in contact or in phase with the leading pack.

As he sought to recover miles, Macaire sailed six miles to the north, offshore of the main group – looking for the wind to back (rotate anti-clockwise) earlier as forecasted.

The 28-year-old sailor from Montpellier, Pierre Quiroga, has steadily increased his lead over the fleet as he heads towards the notorious Raz Blanchard. He is now over four miles ahead of second placed, Tom Laperche (CMB Bretagne Performance).

Laperche said, “We are in the Big Roussel, the channel on the Guernsey side. We are heading towards the Raz Blanchard upwind in a sustained wind looking to pass the Cotentin peninsula. Normally, we should have the current with us for a good part of the afternoon. We must not lose a meter now, it is worth it to really push right now. I’m happy with some of my choices but not all of them. Last night I went back to the shore at one point. I thought it was good, but in fact Pierre Quiroga was three miles ahead of me.”

An ex-French Olympic squad Laser then 470 sailor turned match racer, then turned offshore soloist who has been five years with the very successful Skipper MACIF program, Quiroga finished ninth in last year’s race and fifth overall in the French Elite Offshore Championship. But he is still looking for his first La Solitare du Figaro stage win.

The tidal race between the Cap de la Hague and Alderney – and the north coast of the Cotentin peninsula this evening and in the early part of the final night at sea – represent a significant final, technical hurdle. It stands between the sailors and what should be a straight, long port tack into Fécamp in a breeze which is expected to stay strong – perhaps over 25 knots – to the finish line, and what will be doubtless be a huge relief for the tired skippers.

They were scheduled to pass Cap de la Hague around 1800hrs this Tuesday afternoon just as the tidal current turned against the leaders. This may still cause some compression in the top half of the fleet.

The balance of choices here is to tack into the bay of Cherbourg and seek relief from the contrary tide or stay offshore where the wind is brisker and on a more lifted angle. The first skippers are expected into Fécamp between 0900hrs and 1100hrs local time tomorrow Wednesday.

In the open waters passage between the tip of Brittany and the Channel Islands, Alan Roberts (Seaca Services) dropped a couple of places to lie thirteenth during this afternoon, Ireland’s Tom Dolan (Smurfit Kappa-Kingspan) is 18th.

In third place is Gildas Mahé (Breizh Cola). Mahé said, “I am currently in the traditional Grand Roussel, the channel between Guernsey and Sark. We have current in the right direction, but we are tacking. Since yesterday, we have been climbing upwind hard, with the ice axes out. Shame we don’t have the ski lifts on this stage! I didn’t count the tacks, but it will be interesting to look at the tracking at the finish.

“One thing is certain we did them close together, especially at Portsall, where we had to make a lot. It is not easy. From the point of Brittany, the strategic part is really wide open up to the Raz Blanchard. In this context, the slightest oscillation or small shift between North and South can make a big difference in distance and time. Since yesterday you really had to be decisive. I was a little too mixed. I was really hesitant to go further offshore, but I’m doing pretty well.

“I am very happy to be here but when we are at the Raz Blanchard the current is against us in the opposite direction. We’ll see what happens there …”