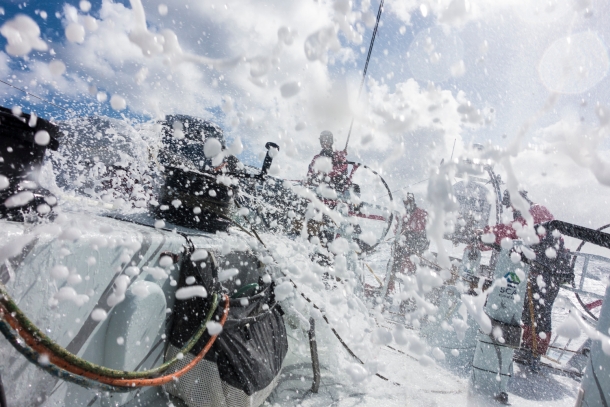 Four of the six boats in the Volvo Ocean Race fleet suffered big hits as the Southern Ocean provided its roughest ride of the race in a dramatic 12 dramatic hours.

Team SCA (Sam Davies/GBR), Dongfeng Race Team (Charles Caudrelier/FRA) and MAPFRE (Iker Martínez/ESP) all did Chinese gybes* from Monday to Tuesday, but the three crews escaped injury despite the boats crashing over in a massive seastate and 40 knots of wind (75 kilometres an hour).

Damage was still being assessed in the aftermath of the incidents although Dongfeng Race Team appeared to have avoided any serious problems with the boat.

Abu Dhabi Ocean Racing (Ian Walker/GBR) also endured a drama-filled night, reporting a 'night of two gybes: a wild one in pitch black with a massive wipe-out and then a ‘controlled’ one at 30 knots'.

Dongfeng Race Team were first to reveal a Chinese gybe, with their Onboard Reporter Yann Riou (FRA) revealing: “It took two to three hours to sort out the mess. The boat was on her side, we took 300 litres of water in to the boat through an air vent.”

Then Team SCA were in a similar situation at around 0500 UTC, the all-women team’s Onboard Reporter, Anna-Lena Elled (SWE), reported. “We ended up on our side for maybe two to four minutes before slowly getting back in the right position,” she told Race HQ.

The crew was assessing the damage and already starting to effect some repairs, Elled continued.

All four boats were still able to continue sailing.

The Emirati boat recovered to move within 14.2 nautical miles (nm) of leaders Team Brunel (Bouwe Bekking/NED) with MAPFRE in third, 19.5nm adrift of the Dutch boat. Team SCA lost 38nm with their struggles, to fall 132.2nm behind the leaders (see panel above).

The boats were expected to reach their Leg 5 destination, Itajaí, Brazil, on April 4. Abu Dhabi Ocean Racing are leading overall, thanks to their superior in-port series record over Dongfeng Race Team. Both have eight points after four legs.

In all, the boats will cover 38,739nm, visiting 11 ports and every continent. The race is scheduled to finish in Gothenburg, Sweden, on June 27.

Chinese gybes – the aftermath at a glance

A Chinese gybe is a scary episode, especially when it happens some 2,000nm from land, in the middle of the Southern Ocean, but all three boats are back on the race track now.

Here is how it happened, what broke, and how the sailors reacted:

Boat speed: From 28 knots over ground to 2.2 knots in a matter of seconds

“It felt like I was on the Titanic when that happened. I kept thinking ‘no, it’s going to be bad’. But I calmed down quickly. Hopefully, it’s not going to happen that often, otherwise I’m not sure if my heart is strong enough” – Black (Liu Xue), race rookie, first time in the Southern Ocean and first Chinese gybe.

“We paid a heavy price in terms of miles lost to our competitors [about 30], but I confess that despite that, I am a happy skipper even after the incident. Why? All my men are onboard, the crew did an extraordinary job, and we haven't broken anything, or damaged any sails” – Charles Caudrelier, skipper, race winner in 2011-12 but his first Chinese gybe.

Heel angle: from 40 degrees on port tack to 71 degrees on starboard in 20 seconds

Breakages: Tore their Fractional Code 0 and damaged the mainsail

“It’s not very funny, but it was obviously pretty breezy, big waves, just coming down a big wave, nose went in. And that’s it, out of control and into a gybe, laid on its side. Not too much damage: tore the J2 (headsail), damage to the main, obviously lost a load of miles in the process. Licking our wounds now!” – Rob Greenhalgh, three Volvo Ocean Races including a victory in 2005-06, does not remember if he’s experienced a Chinese gybe before or not.

“We were on deck and it was me who was closest to the water. Xabi grabbed my jacket and helped me get out of this terrible situation. Inside the boat, the situation was not very good either. The members of the crew who were sleeping, were crushed between their bunk and the deck. A situation quite uncomfortable for those with claustrophobia” – Francisco Vignale, Onboard Reporter, first time in the Southern Ocean and his first Chinese gybe.

Breakages: Blew up their Fractional Code 0, tore their mainsail, dropped half the stack (the sails not being used, but stacked on the windward side of the deck to add stability) overboard.

“It’s all gonna be good. Everyone is safe, the boat is safe. We just have a damaged sail. That, we can live with. Everyone did a good job” – Dee Caffari, only woman to have sailed around the world three times, non stop.

“We’re moving in the right direction, very slowly. We’ve got to run some checks, we’re working on getting the stack back onboard and tidying up the mess. But all good” – race veteran Abby Ehler

* Chinese gybe: an accidental gybe caused by either strong wind or a big wave. It forces the main sail to slam over, the boat to end up on its side in the water, with the keel on the wrong side, pinning it down.