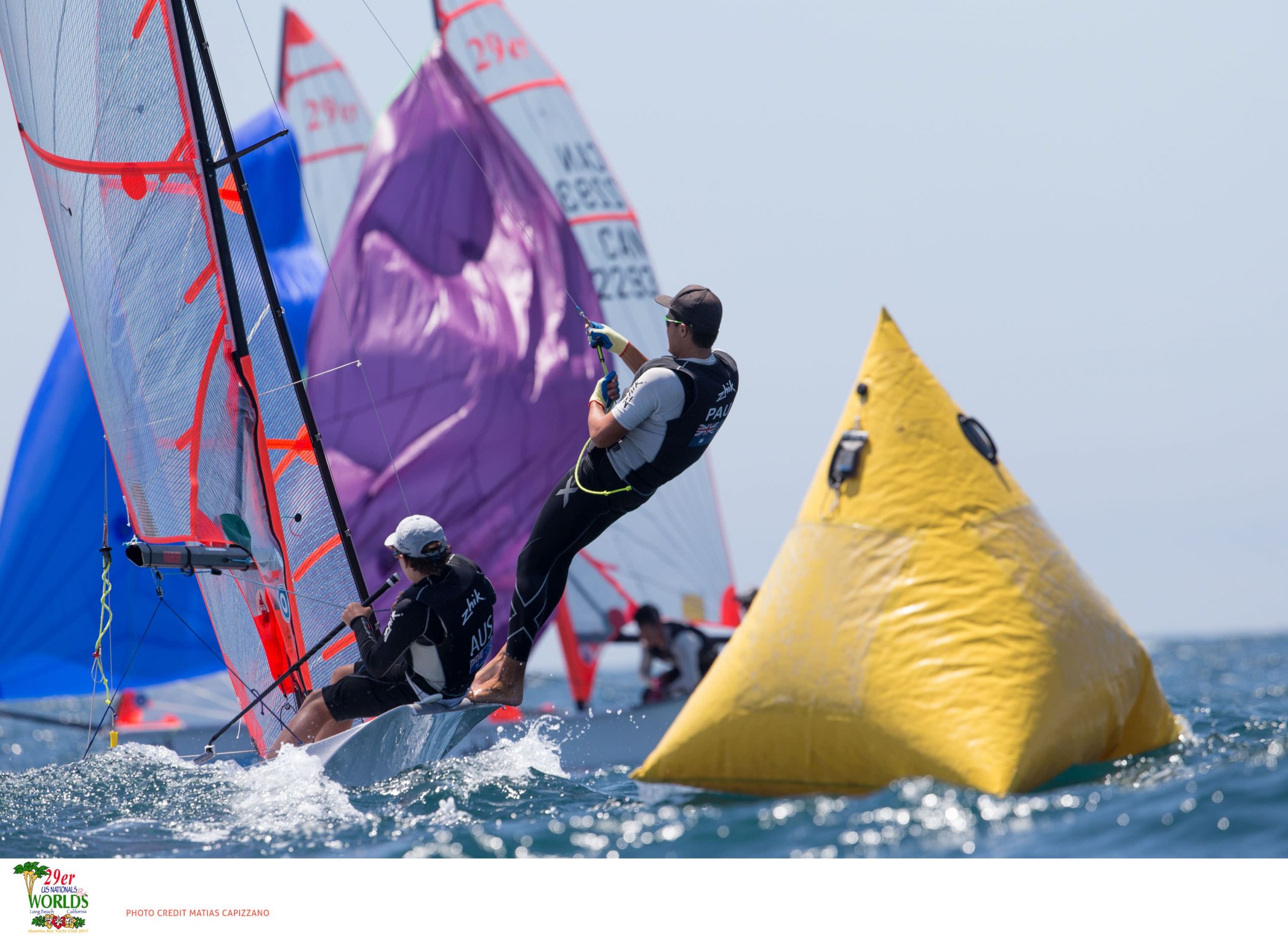 Long Beach, California: Bolstered by better breeze, with steady winds of 12 to 16 knots, the team of Benji Daniel, 16, and Alex Burger, 21, RSA, widened their lead to place a firm grip on first place in the 29er World Championship regatta.

One-hundred-twenty-nine teams from around the globe are competing in the six-day event, hosted by Alamitos Bay Yacht Club, which concludes tomorrow, August 5.

Daniel and Burger said they came to the championship regatta with the goal of simply doing their best. But after another solid day of racing – consistently placing in the top five throughout the finals – it just occurred to them that they could win this thing.

Despite sailing the 29er together for only four months, the young men trained specifically for this competition, purposely sailing in mixed conditions. Training in the waters off both Durban and Cape Town, the boys’ hometowns, respectively, has prepared them well. Despite the series starting with unusual conditions for Long Beach, Burger reports that sailing conditions in South Africa are even more variable.

They also attributed their success to their height. It’s a massive advantage, they said. Both young men are tall and lean, giving them more leverage. “We also complement each other as a team, not only physically in size, but in making smart decisions,” said Burger.

Daniel, at the helm, is responsible for making sure the boat is going top speed all the time. “Whoever sails the shortest distance at the highest velocity, wins,” Burger said, adding with a smile, “speed makes you look clever.”

Daniel directs them along shortest route but credit he said goes to both team members for sharing responsibilities half and half on the boat – tactics and implementation.
Despite doing really well, the pair say that goal has not changed: do their best. “Our attitude will be the same ‘til the last race,” Burger said.

Although they started the day with a 1-2-1, Duncan Loiaz/Elias Dalli, ARG, made a valiant effort of reclaiming first place, but a 12th place finish in the last race left them in second, with the two French teams hot on their derrières. Seb Lardies/Scott McKenzie, NZL, dropped from a tie for third, to fifth. The top US team of Toppa/Rosenberg slid to 12th.

Next generation takes the helm
For nearly 20 years the 29er has been a popular junior class; considered a stepping stone to higher level racing, and a favoured platform for the progeny of sailing greats, cutting their teeth. The 29er Worlds fleet at ABYC is no exception, sprinkled with promising sailing stock: like Harry and Harriet.

Harry Melges’ great-grandfather started the Melges Boat empire, which continued to grow with the successes of Harry’s grandfather Buddy, and Dad. “I’ve been around sailing my whole life, going to every regatta,” says Melges, 16, who grew up in Lake Geneva, Wisconsin and is racing with Finn Rowe.

Despite family fame, Melges says there’s, “no pressure. I’m doing this for myself.” Fairly new to the 29er, finishing 21st in the Gold fleet today, he said, “This is the most competitive event I’ve sailed in yet. And the venue is awesome.”

Reared with another yachting legacy, Harriet “Hattie” Rogers last name is synonymous with yacht design; from the Contessa line created by her grandfather, to round-the-world racers designed by her father Simon.

“I’ve been sailing since I was an infant: I didn’t have much of a choice! But I loved it from day one,” said Rogers, 17. As for her father, she continued, “He’s been out a lot this week, watching. On the water I see him more as a coach and team manager. He’s got so much experience, and is such a good sailor, I learn a lot from him. I kind of soak it all up.”

“It’s been a really good regatta,” added Rogers, who is racing with Emily Covell, daughter of Olympic medallist Mark Covell; but with a nod to regular crew and training partner Eve Townsend.

“The quality of the fleet here is really high – I just made it into the Gold fleet,” she admitted, finishing 49th in Qualifying. They finished in 47th place at the penultimate day of Finals. “And the race committee has done a good job getting races in, in tricky conditions, and I’d like to say thank you to them.”

All that glitters is not gold
At the top of the Silver Fleet, Morgan Pinckney /Michael Sabourin of Newport Beach, Calif. are in tight clash with the Kiwis.

“There are some really good sailors in the Silver Fleet,” Pinckney stressed, attributing that to several teams who got Black Flag Disqualified in the Qualifying Series, bumping them down the ranks.

“It’s really close, and the starts are really gnarly. You’ve got a boat five feet above you, a boat five feet below you, and you’ve just got to find a hole. Everyone has good speed; it’s all about having good tactics.” They sit two points behind Craig Keenan/Reece Caulfield, in second; with Ben Peterson/Sean Paterson in the lead at 93 points.

In the Bronze Fleet, Brazilians Lorenzo Bernd/Philipp Rump are poised in first, with three bullets under their belt in Finals, so far.

It’s not just about race results, noted New Zealand Coach Matt Thomas. “Our focus is to help the racers set goals, follow the process and learn to solve problems independently, without coaches or anyone else.” Despite some good-spirited ribbing from competitors stopping by the coach boat, Thomas maintains that it’s all about learning, “They are all kids, at the end of the day.” But at the same time, the teams are still keen to do well and win.