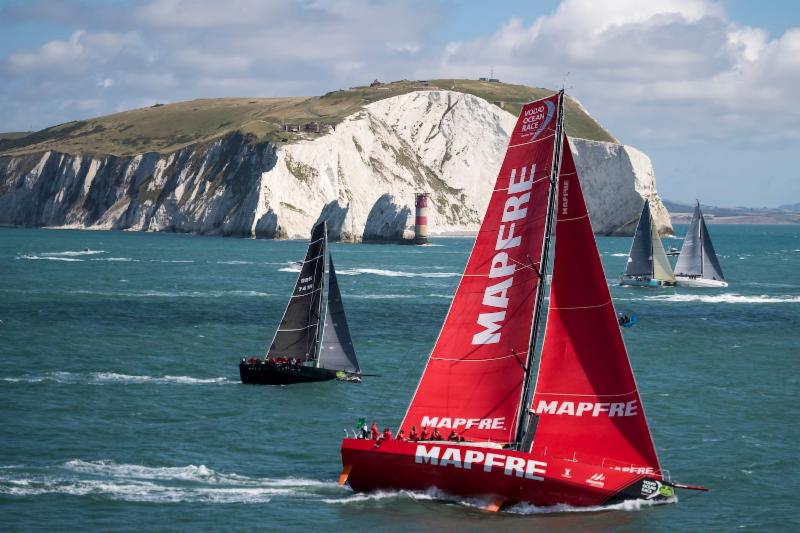 07/08/2017
The Solent laid on 'classic' conditions for the start of the Royal Ocean Racing Club's 47th Rolex Fastnet Race. In brilliant sunshine and with brisk westerly winds gusting up to 20 knots, the giant fleet tacked up the western Solent before compressing through the usual bottleneck at Hurst Narrows. A record-sized fleet of 368 boats started the race, 12 more than two years ago, confirming the Rolex Fastnet Race's position as the world's largest offshore yacht race.
The first start got underway at 11:00 BST for the nine multihulls and within minutes, the blue three-hulled streak that is Concise 10 had pulled out a lead, frequently heeling to an alarming degree, just one hull immersed. By the time IRC One was starting at 12:20 Tony Lawson's MOD 70, skippered by Ned Collier Wakefield, was already off Poole. Crewman Paul Larsen, who five years ago became the world's fastest sailor setting a world record of 65.45 knots, reported Concise 10 was sailing under reefed mainsail and staysail. “We're making 20 knots tacking past Poole and just dropping into the watch system. Glamour start conditions in the Solent. I can just see the next boats clearing Hurst Castle.” However Larsen warned that unless the wind freed up, there was little chance for them to break the multihull race record. By 1500 Concise 10 was already level with Portland Bill.
The multihulls were followed away from Cowes by two other 'non-IRC' classes – the nine doublehanded IMOCA 60s and twenty seven Class40s. Given the upwind conditions, the older, conventionally foiled IMOCA 60s were prevailing. At 1630 Paul Meilhat and Jules Verne Trophy record holder crewman Gwénolé Gahinet aboard SMA, the 2012-3 Vendee Globe (and the 2013 Rolex Fastnet Race) winner as MACIF, were leading the 60s past Portland Bill. The first 'foil-assisted' IMOCA 60 was favourite Alex Thomson and Nicholas O'Leary on Hugo Boss in third place, taking a northerly route, close to the land.
In the Class40s present championship leader Phil Sharp on board Imerys led past St Alban's Head, but later there was little too choose with the British boat neck and neck for the lead in this incredible fleet with the Maxime Sorel-skippered V And B, Burkhard Keese's Stella Nova, Benoit Charon's LMAX Normandie and race veteran Halvard Mabire and Miranda Merron on Campagne de France.
The five IRC handicap classes, chasing the race's overall prize of the Fastnet Challenge Cup started with the smallest boats first at 1120.
This afternoon at 1600, the IRC One fleet had fanned out across the course to the southeast of St Alban's Head. James Neville's HH42 Ino XXX was leading the charge inshore as Staffan Wincrantz's Arcona 465 SALT 2.0 was ahead on the water to the south, just ahead of the venerable 1960s maxi Kialoa II, owned by Patrick Broughton.
Mid-afternoon, competitors in IRC Two were favouring the inshore route with Dutchman Frans Rodenburg's First 40 Elke, closest to St Alban's Head at 1620, with class favourite Gilles Fournier and Corinne Migraine's J/133 Pintia nearby.
The IRC Three boats were following a similar tactic with the offshore tack being less popular. Having started 20 minutes earlier, they were still successfully fending off the advances of the larger, faster IRC Two fleet. The Russian JPK 10.80, Igor Rytov's Boyatyr, was leading the pack inshore while the brilliantly-named Seafarers Ale Anticipation, the First 40.7 of former 470 Olympian Pete Newlands, was ahead on the water offshore.
The inshore-offshore spread was more evenly distributed among the smallest boats in IRC Four. Here Noel Racine's impeccably sailed JPK 10.10 Foggy Dew was ahead inshore while Dan Rigden's Elan 37 Tacktic was furthest down the track out to sea.
The last to start were the largest in the IRC fleet, IRC Zero, including the line honours contenders George David's Rambler 88 and Ludde Ingvall's 100ft CQS. By 1520, Rambler 88 was off and close into St Alban's Head, leading IRC Zero on the water just ahead of the biggest boat in the fleet, the 115ft Nikata.
Among the seven one design VO65s competing in 'Leg 0' of the 2017-18 Volvo Ocean Race, it was very close, with the Charles Caudrelier-skippered Dongfeng Race Team a nose ahead and making 12.3 knots but facing a threat from Team Brunel, skippered again by Dutch race veteran Bouwe Bekking, making 12.5 as the boats passed St Alban's Head.
This morning Xabi Fernández, skipper of MAPFRE, looked forward to the race: “Once out of the Solent it will be upwind sailing up to the Fastnet rock, and finally we will sail downwind towards Plymouth. This is the first time I've competed in the Rolex Fastnet Race. It is a historic race, much like the Rolex Sydney Hobart.”
Joan Vila, MAPFRE's legendary navigator confirmed the forecast: “Once we leave the Solent, the wind will blow at around 20 knots. From there, it will drop until tomorrow morning, with the probability of encountering areas of very light wind. As we get closer to Plymouth, the wind will build again.”
Race Tracker
– James Boyd