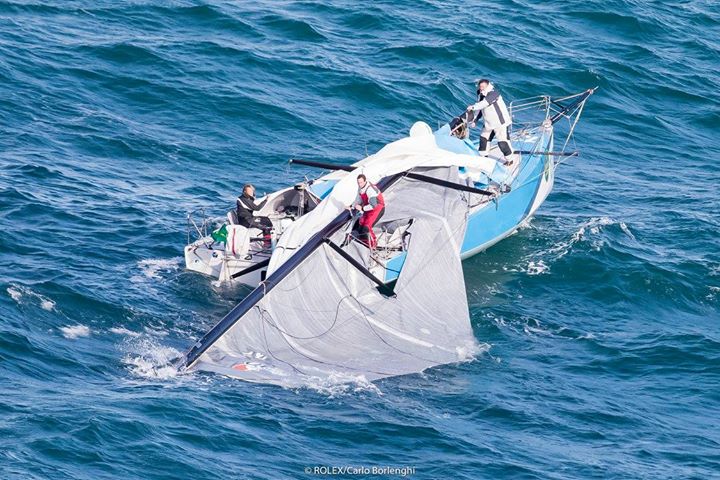 At 15:49:37 BST Tony Lawson's MOD70 trimaran Concise 10 became the first boat to round the Fastnet rock off southwest Ireland. At the time the next boat in the race, George David's Rambler 88 was 111 miles astern. However thanks to their upwind passage their time of 28 hours 49 minutes was well outside of record to the Rock of 22 hours and 21 minutes, set in 2011 by the Loick Peyron-skippered 40m Banque Populaire Maxi trimaran.

Earlier in the day off the Irish coast, Concise's Jonny Malbon reported that they were sailing in 13-15 knot westerly winds and generally it was going well. “Off Land's End it got a bit funky as the front came through – there was no breeze and then a fair bit of breeze. We had the genniker up for about 30 seconds and then the wind came clanging forwards and it turned into an upwind slog. But the sun has come out now so it is making it all a lot better.”

Meanwhile the monohull leaders have been making their way up the east side of the Traffic Separation Scheme (TSS) exclusion zone to the west of Land's End and north into the Celtic Sea. In this battle, George David's Rambler 88 has pulled out a 33 miles lead on the water over Ludde Ingvall's 100ft CQS.

Behind them, a three-way battle is going on for the lead between the VO65s competing on the Volvo Ocean Race's Leg Zero. At 1600, Team Akzonobel was a mile ahead of Dongfeng Race Team, and Sung Hung Kai Scallyway.

However they were still astern of the doublehanded IMOCA 60 – Paul Meilhat and Gwénolé Gahinet on SMA. SMA was followed by two of the older IMOCA 60s, Vivo A Beira, sailed by former Solitaire du Figaro winner Yoann Richomme and Pierre Lacaze and Generali, sailed by Isabelle Joschke and Pierre Brasseur, both ahead of the latest generation foil-assisted IMOCA 60s which have not been enjoying the upwind conditions.

To date only two boats, both IMOCA 60s, have opted to go to the west of the Land's End TSS – Jean-Pierre Dick and Yann Eliès on StMichel-Virbac and Boris Herrmann and Pierre Casiraghi on Malizia.

This afternoon Vendee2020Vision sailor Will Harris was feeling smug on the Open 60 Artemis Ocean Racing as they were about one mile to weather of Alex Thomson and Nicholas O'Leary on Hugo Boss, having passed up the east side of the TSS. Had there been any chance of them going to the west?

“At the start of the race, that's what we were thinking,” explained Harris. “The reason to go west would be because of the new breeze filling in from that side first. But it looks like by going east we will have a big right shift en route to the Fastnet. We could spend more time sailing in less wind, but with the shift we hope we can point to the Rock.” The shift is due at around midnight.

Earlier in the day they passed through a cold front, bringing with it some rain and once through the front the wind dropped off. Meanwhile they have been introducing Andy Yap from new sponsor UKCloud to offshore racing.

Throughout the day the lead in IRC Zero has been changing to smaller boats as those ahead were trapped by the front. At 1600 it was the turn of the Ker 46 Lady Mariposa to take the lead from Bretagne Telecom and before that the Cookson 50 Privateer.

Massive on the water lead had also been developed by Gilles Fournier and Corinne Migraine's J/133 Pintia in IRC Two – also overall leaders across the whole IRC fleet (and even ahead of Codiam on the water).

“We are a bit amazing we are leading – I don't know whether it will last” admitted Fournier. “Our aim is to win our class which we might well do. Winning overall would be a bonus.”

Their lead, Fournier felt, was due to going inshore at Portland Bill. “That was the main reason we are in a good position. Also Pintia goes well to windward. Downwind we are not bad, but some boats go much better than us.”

Fournier said they were waiting to pass through the front and to get into the right shift behind it, but were still contemplating whether to the leave the Land's End TSS to port or starboard. Their inshore track off the Cornish coast indicates they may follow the majority up the easterly route.

While French crews might give the impression catering on board is all Chateau Margot and foie gras, on board Pintia, Fournier admitted: “My daughter Corine is making us excellent food. We had pasta carbonara. And yesterday we had chilli con carne for dinner.”

Similarly in IRC Three, Altikhan – Linxea Valoris & Benefits, the A35 of Serge Jamet and Johann Bouic had pulled out a lead both on the water and on corrected time as long as their name. Late this afternoon they were approaching the Lizard Point ahead of JPK 10.80 favourites, Dream Pearls of France's Arnaud Delamare and Eric Mordret and Bogatyr of Russian Igor Rytov; both boats off Falmouth. They were in a similar position to the JPK 10.10 Night & Day of Pascal and Alexis Loisin, the father and son team who won the Rolex Fastnet Race in 2013, and leaders in IRC Four both on the water and on corrected time, having taken over the yellow jumper from Harry J. Heijst's ancient but slippery upwind S&S 41, Winsome this afternoon.

The biggest competition though is in the Class40 where this afternoon Anglo-French couple Halvard Mabire and Miranda Merron aboard Campagne de France have taken over first place from Phil Sharp on Imerys, with Maxime Sorel's V&B also strongly in contention as the boats head up the east side of the Land's End TSS.

Early in the afternoon Miranda Merron reported “Near Land's End. Rather light at the moment. We are not looking forward to the endless invisible wall of the TSS, which is pretty useless as it doesn't dampen the waves either! Imerys and V&B ahead, several others close behind. We are enjoying racing with all the IRC boats too.”

Phil Sharp said: “So far it's been non-stop, we've made a lot of sail changes and had many difficult decisions to make because the weather is very unstable and the forecasts are highly localised. Our little confidence in the forecasts has pushed our strategy to focus on simply sailing the shortest route – essentially to reduce the chance of getting caught out.”

On board Imerys they have been busy repairing two piece of mainsheet track that failed yesterday afternoon.

There has been one significant retirement among the Class40s when Phor-ty, the competitive Mach 40 of Britain's Peter Harding, dismasted yesterday afternoon four miles from Portland Bill. “I had a really good feeling – we were moving in the right direction in the fleet and we had a really good crew. I am very gutted,” admitted Phor-ty's Pip Hare. “We got to Portland Race on the turn of the tide so we had the first of the tide against us, but we were still making eight knots across the ground. It wasn't as lumpy as it could have been. But then we had a failure of a forestay fitting – it went 'BANG' and the mast floated down behind us.”

They were able to save the rig with minimal damage and retired into Portland Harbour.

Track the fleet in the Rolex Fastnet Race: http://cf.yb.tl/fastnet2017