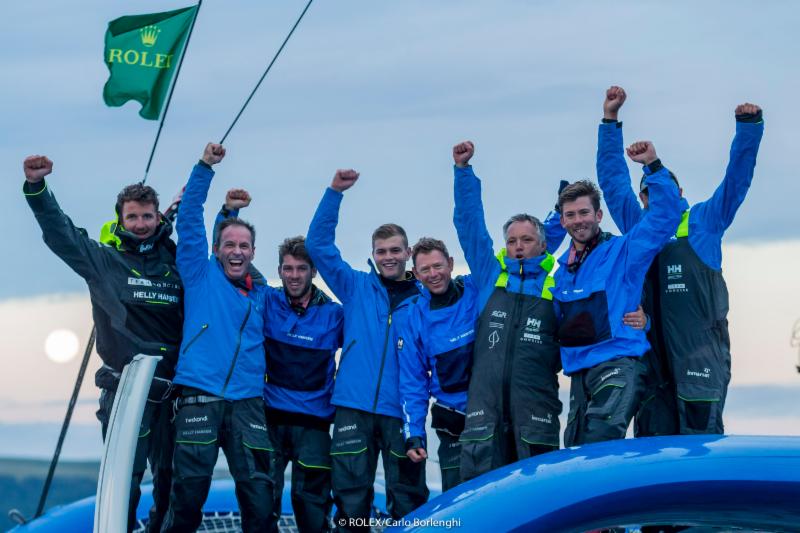 Unchallenged, Concise 10 blazed into Plymouth this morning, first boat home in the 47th Rolex Fastnet Race. Tony Lawson's MOD70 trimaran crossed the finish line off Plymouth breakwater at 05:55:00 BST with a race time of 42 hours and 55 minutes. This time didn't come close to the overall multihull record for the Rolex Fastnet Race but it was still respectable considering they sailed upwind all the way to the Fastnet Rock.

Dockside at Plymouth Yacht Haven, a beaming Tony Lawson commented: “To take the record for the Round the Island Race just a few weeks ago and then this… they deserve it, they have sailed well. Everyone thinks multihulls can't go to weather, but we led three state of the art monohulls around the Rock by about 100 miles and we led them into Plymouth by 200 miles. So if you want to go fast you have to get yourself a multihull!”

The first monohull arrivals are due into Plymouth tonight with George David's Rambler 88 leading the charge, rounding Bishop Rock, the mandatory mark of the course southwest of the Scilly Isles, at 1515 BST.

But the hottest contest in this group is between the seven one design Volvo Open 65s. They finally reached the Fastnet Rock at around breakfast time this morning with the Chinese entry Dongfeng Race Team in first place, making the turn south at 0758, followed by Team Akzonobel, MAPFRE, Sun Hung Kai Scallywag, Team Brunel, Vestas 11th Hour Racing and with the Dee Caffari-skippered Turn the Tide on Plastic bringing up the rear almost an hour later.

For the VO65s, the Rolex Fastnet Race doubles as 'Leg Zero' of the Volvo Ocean Race and is a non-scoring practice race prior to the main event. However no one seems to have told the crews this. Since leaving Cowes on Sunday they have been sailing every bit as hard here as they will when their round the world race proper sets sail from Alicante on 22 October.

En route to the Fastnet Rock overnight the Chinese Dongfeng Race Team had taken the lead. “It was upwind, but we had a good night,” reported French skipper Charles Caudrelier. “We passed Team Azkonobel this morning. We were behind them and then we were much faster. It was not about the crew – maybe they caught something around their keel. But also we were very fast on this tack because we got through the fleet.”

As to the conditions they were experiencing on the return journey back across the Celtic Sea, Caudrelier, who won the Volvo Ocean Race in 2011-12 with Groupama, said: “It is very, very complicated. Everyone has gone into the corner and the wind is very, very shifty. MAPFRE was far behind us and they caught a big shift and they seem to be ahead now. There are shifts of 20-40° and the same with the wind speed. For a long time, we had 10 knots and the others had 15. Now we all have the same wind, around 16-17 knots. You would make a good choice and gain a lot, but then for one hour we had five knots less.”

At the time Caudrelier was estimating their arrival at the finish being around 0200 Wednesday.

Late this afternoon the IRC Z boats such as Piet Vroon's Ker 51 Tonnerre 4 and Nicolas Lecarpentier's Marten 72, Aragon, were rounding the Fastnet Rock, while the last handful of boats, mostly in IRC Four, were passing between Land's End and the Scilly Isles, with the whole lap – across the Celtic Sea, round the Fastnet Race, south across the Celtic Sea to Bishop Rock, then the run back on past the Lizard to the finish off Plymouth breakwater – still ahead of them.

Heading up the east side of the Traffic Separation Scheme off Land's End was Kate Cope's Sun Odyssey 36 Purple Mist, still with more than 400 miles, or two thirds of the race, ahead of them. However this was in no way phasing Cope. “We can see Longships Lighthouse. It is champagne sailing, nice sunny weather with 13-14 knots from the northwest.”

Cope reported seeing dolphins by the legion. “In fact, we've seen so many dolphins that one of my crew said that I'm not getting out of bed unless the dolphins are doing back flips. At which point they promptly started doing back flips! The boat was becalmed, east of Eddystone and they were all around the boat, swimming upside down, on top of each other and doing back flips. That went on for about 45 minutes.”

Cope's Purple Mist crew are all experienced Yachtmaster-level cruising sailors but only took up racing last year. “I did three RORC races last year and I have done everything this year – so like 10 RORC races in total is my entire racing experience.”

Not only is this their first Rolex Fastnet Race, it is also the furthest west Cope has ever sailed. “This is my Everest. I just decided to go straight for the top. I like racing alongside Concise 10 and Alex Thomson and Sam Davies. They are my heroes so being in this race with them is incredible – even if we are last!”

However she was a little anxious about the weather ahead this evening. “The forecast shows 20 knots gusting to 26 knots – that won't be too nice in the middle of the Irish Sea.”

Sailing up the opposite, westerly side of the Traffic Separation Scheme close to the Scillies was the Royal Artillery crew on the Rustler 42, St Barbara V. Again they are a newbie crew, aged 23-55, with only the skipper and one other having competed in the Rolex Fastnet Race before, and several of the crew having no offshore racing experience before this year. The crew was chosen at the Army Offshore Regatta in May. “On our heavy old tub of a boat, we never expected to be near the front, but we're having a good time,” said skipper Nat Webber.

Theirs is one of 12 service boats competing in this year's Rolex Fastnet Race, the best known being the fleet of Nicholson 55s being run by the Joint Services Adventurous Sail Training Centre. They are all competing for the Inter-Regimental Cup, although Webber admits: “We're not really in it, but you never know! Some of the Nic 55s are not too far in front and we are hoping to stay with them.”

As to their progress to date, Webber said: “The last 24 hours have been pretty dire for us as below 14 knots we wallow in the water.” So he was pleased with the more lively forecast for this evening: “They looks like perfect conditions. We are doing the wind dance!”

Tonight the bulk of the Rolex Fastnet Race will be progressing across the Celtic Sea to the Fastnet Rock. In IRC One, the Mylius 15e25 Ars Una of Italian Vittorio Biscarini late this afternoon was approaching the Fastnet Rock, having recovered the lead from the French crew on Codiam.

In IRC Two, Gilles Fournier and Corinne Migraine's J/133 Pintia still had just over 50 miles to sail to reach the Fastnet rock but had extended her lead on corrected time in her class, having pulled more than 5.5 hours ahead of second-placed, British favourites Nick and Suzi Jones' First 44.7 Lisa, skippered by RORC Commodore, Michael Boyd.

Leaders in IRC Three, both on the water and on corrected time, were half way to the Fastnet late this afternoon with Arnaud Delamare and Eric Mordret's JPK 10.80 Dream Pearls easing ahead of the doublehanded crews – Ian Hoddle and Oliver Wyatt on the Sun Fast 3600, Game On, and Ed Fishwick and Nick Cherry on Redshift Reloaded. All three boats were jockeying for the lead on the water with Dream Pearls closest to the rhumb line to the Fastnet Rock.

Meanwhile in IRC Four, the JPK 10.10s have been suffering, allowing the upwind weapon that is Paul Kavanagh's Swan 44 Pomeroy Swan to take the lead ahead of Chris Choules' Sigma 38, With Alacrity.

The next wave of boats to round the Fastnet Rock will be the twenty seven Class40s where the Franco-Anglo duo of Halvard Mabire and Miranda on board Campagne de France have regained the lead from Britain's Phil Sharp on Imerys.