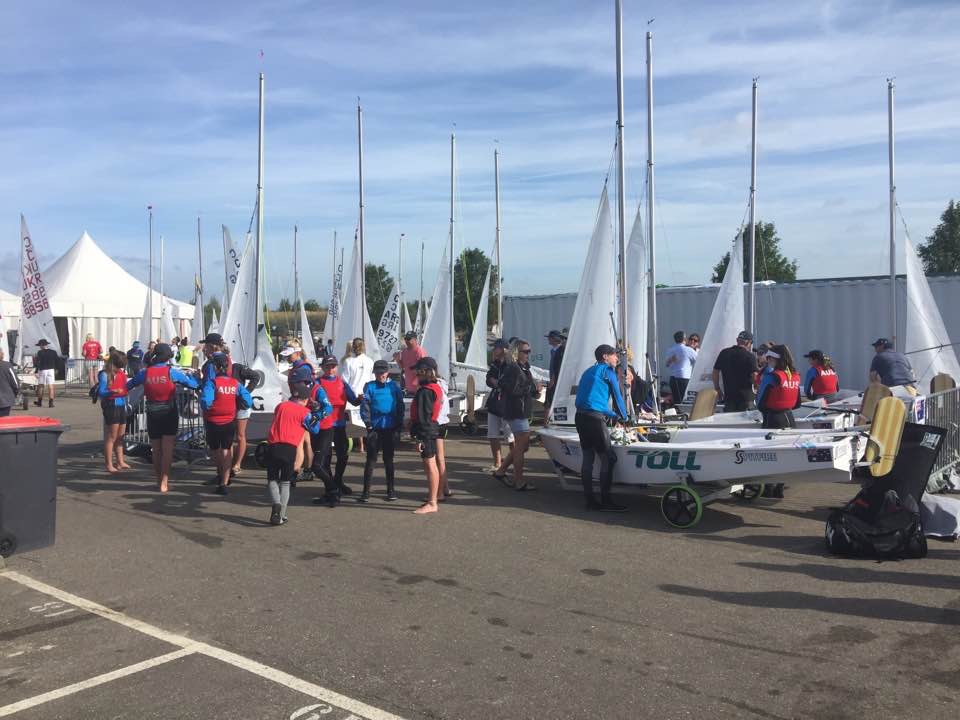 The Aussies in the boat park. Photo Tony Bull.

In Australia we grow up on a diet of sea breezes and firm winds. We do race occasionally in extremely light airs but it is somewhat of a rarity and we are not as conditioned in them as other nationalities.

This was quite obvious today in the very marginal conditions. The first few days were always going to be the lightest of our regatta according to our forecast. With slightly stronger breezes later in regatta hopefully and twenty knots forecast on our lay day.

After a pretty good day yesterday in light winds, today's sailing was held in marginal and at times drifting conditions of 0-5 knots. On the whole we did not cope well with these light and widely swinging winds with changes in direction of up to 90 degrees.

We did however have some good results with a couple of our worlds teams getting finishes in the teens which was fantastic in conditions that were completely foreign to them.

The success story of the regatta so far is our promotional fleet entry Peter Allen and Olly Grieves who have taken the lead in their regatta. They are sailing well and it is great to see them coming ahead in leaps and bounds.

On the worlds courses Jacob Mcconaghy and Sam Hooper are hanging onto 6th overall. Charlie Goodfellow and Laurie Jeff's have slipped to 12th after just failing to finish within the time limit in the last race, more on that later.

Race 1 was started in drifting conditions and the wind did build a touch to be sailable but swung widely over the course of the race. Race 2 was similar and I can recall early getting quite excited as we appeared to be well placed with several  boats in the top ten approaching the mark on a lifting tack from the left with the bulk of the fleet abeam of them to leeward. Literally one minute later it had completely reversed and the right was heavily favoured. But there was enough wind to keep the boats moving despite the shifting winds.

Race 3 was very controversial, as Race 2 came to a close the wind chose to soften even further. The AP ( signifying a delay) flag went up after an aborted start. I and I think most others thought that would be it for the day. Waiting around for about 45 minutes before a light breeze filled in and the Race Committee hastened to get in a third race for the day. This was surprising as we have five scheduled sailing days and the lay day as reserve to complete our allotted 12 races although it is not absolutely a requirement to hold all the races if the weather in inclement enough not to race.

Race committees do like to get ahead and have some races “in the bank” as it were, particularly if the regatta forecast looks grim. We now have six completed races in our first two days.

The race turned into a farce with widely oscillating winds and spinnakers being used to get to the top mark and as the race progressed the wind disappeared completely and the whole fleet was becalmed. The first 21 boats were able to drift home, the others were declared DNF ( did not finish) after the time limit elapsed.

The coaches briefing with the RC later this morning could be interesting!

The other seeming consequence (or blight ) of sailing in these conditions is the number of yellow flags (penalties for illegal propulsion by kinetic movement) awarded by the on-water jury. On the first day 20% of the entire fleet were penalised. The first penalty is a 720 degree turn, subsequent ongoing penalties after this for rest of regatta retirement from that race. I can only imagine this number was added to significantly yesterday as I could hear lots of whistles on the course. It is not uncommon to get two or three penalties per day but this is far and away the most I have seen and could be very regatta defining. We the Australian team have only scored one so far, which is encouraging.

Looking ahead we have a funny forecast, there is some wind early but appears to shut down early afternoon as rain comes in. Our lay day tomorrow is forecast for 15-20 knots then 8-10 for our last two sailing days at the moment.

With all the shoreside talk of yellow flags and race committees, we will focus our concentration on things we can control. We are here to sail our boats as well as we can in whatever conditions prevail. The team spirit is generally high although some are naturally disappointed. It was good to see so many come back last night after a very tiring frustrating day to support Pete and Ollie with their great results at the Promotional prize giving.