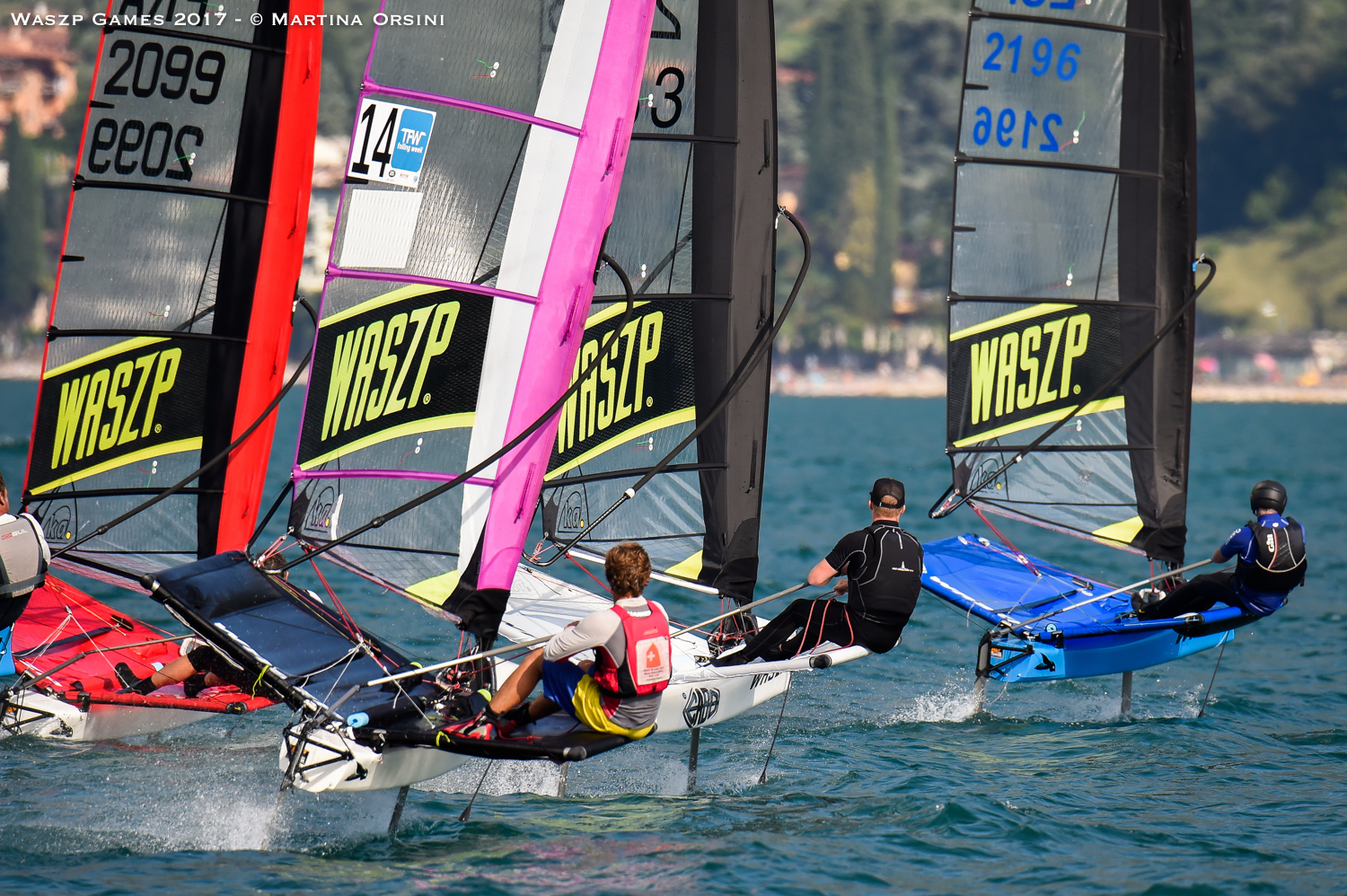 It was a fitting finale to the first International WASZP Games at Campione on Lake Garda. Harry Mighell from Sorrento in Victoria, Australia, did a horizon job on the fleet in light 7-10 knot marginal foiling conditions.

Race 9 started in a patchy light breeze from the south that swung around the compass right from the start. The fleet of 53 WASZP’s packed the start line, low riding off on starboard tack.

This time the shift further to true South forced the majority to take the left side of the course sailing low towards Malcesine on the East side of the Lake. A number of competitors fell into holes or off the foils stopping dead to let clusters of other WASZP’s past.

Rory Rose (GBR) from Aberdeen & Stonehaven YC in Scotland, led a group of the lighter youth sailors around lap 1, but the experience of Harry Mighell was enough for him to keep them in his sights. Harry rounded just behind Reed Baldridge (USA). Guillaume Rol, the 19 year old Swiss sailor and Stuart Appleby from WPNSA in the UK were up in the front pack.

Downwind, Harry Mighell pulled away leaving the young guns to try and defend their positions against the more experienced WASZP sailors. Back upwind for the second time and Mighell used the pressure in the middle section of the course to sail well clear, but the places were changing behind him as the breeze continued to oscillate.

Rory Rose held on to second and the kiwi Bruce Curson appeared to be reeling in the places just ahead of Joan Costa from Spain, his nearest rival overall. Reed Baldridge was slipping down the pack and his challenge for the overall title rapidly fading.

The last leg was a bit of a game changer, as the breeze begun to fade and the struggle to stay in pressure to foil becoming an absolute necessity.
Mighell cruised across the finish line to win by a country mile. Harry was a key cog in the design and build team of the WASZP and it was a proud moment for him to win the inaugural International WASZP Games in the boat he was largely responsible for creating.

Behind Harry, second to cross the line was a jubilant young Swiss youth sailor Guillaume Rol, enjoying his moment in the sun. Carving through the fleet for third was Kohei Kajimoto, one of the WASZP team who sails in Melbourne, Australia.

In fourth was Joan Costa from Spain, who at only 17 years of age, sealed the Youth category. Behind Joan, another Spanish young gun, Ruben Booth, finished with his best performance of the championship. Reed Baldridge crept over in sixth to claim second overall in the championship.

Speed Demon of the day was Mikel Vazquez from Spain with a speed of 18.3 knots in very light airs. Speed Freak of the Week was Bruce Curson on New Zealand with a top speed of 21.8 knots.

Before the final race of the WASZP Games, a Handicap Pursuit Race was staged whilst the wind was still too light to foil. Almost all competitors took part in this fun race and the format met with general approval.

David Lilburn from Royal Tay YC led throughout the first lap being chased by Sara Winther of New Zealand and Claudio Lenzi from Circulo Vela Bellano in Italy. As a faint breeze increased and some of the lighter sailors managed to briefly foil, the fleet condensed to an exciting finish. The winner was Stuart Appleby from Weymouth in the UK.

The WASZP team will be announcing further WASZP International Games events and a series of regional championship regattas in the near future. For more information please visit: www.waszp.com