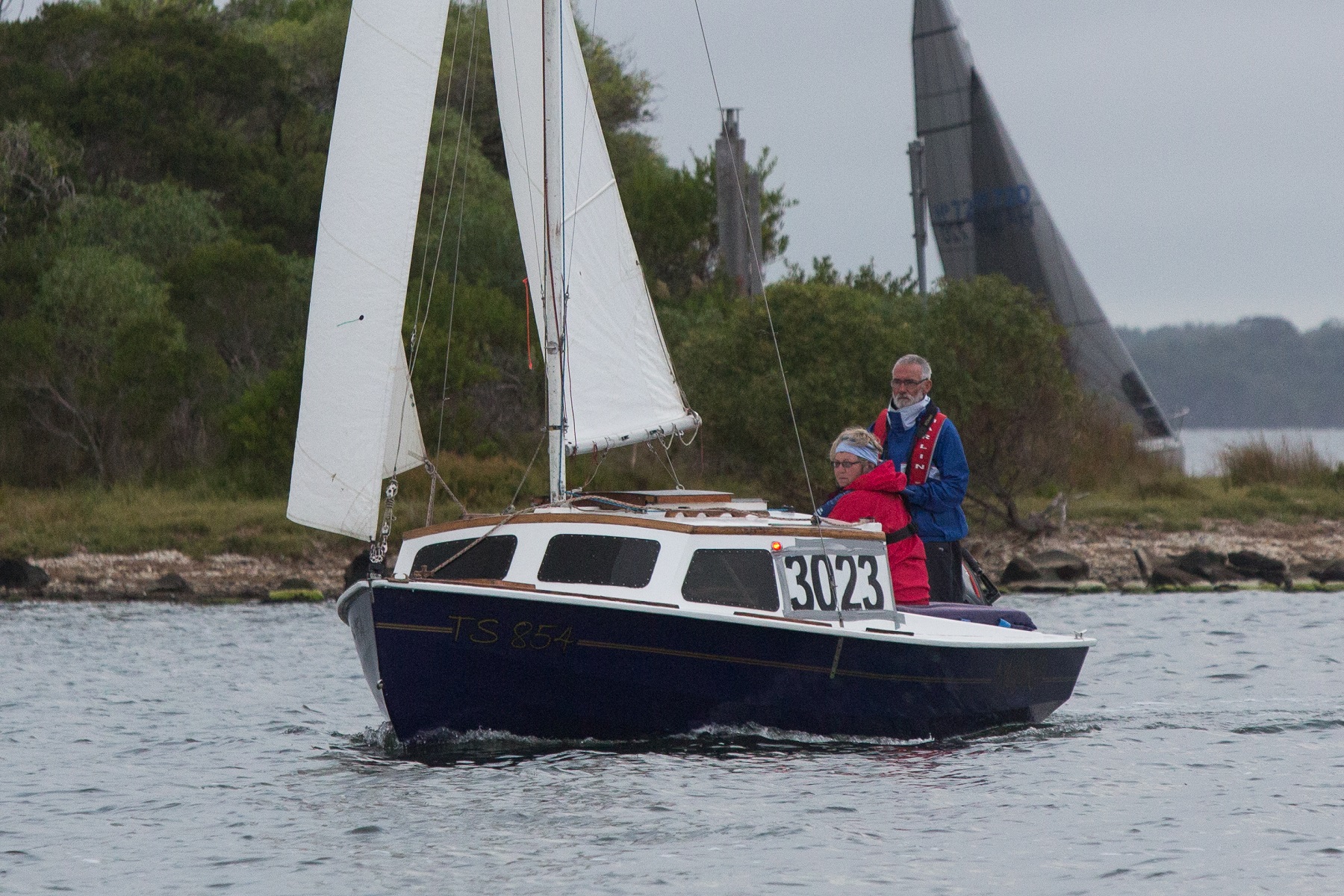 Julie Keating has competed in every Marlay Point overnight Race for the last 25 years, and while she’s not one to brag, she has a lot to be proud of as she prepares for her 26th race in 2018, which is also the 50th anniversary of the iconic night race.

The C.H Robinson 50th Marlay Point Overnight Race will take place on the Gippsland Lakes, Victoria on 10 March, 2018. Over 200 trailable yachts and multihulls are expected to compete in one of Australia’s best known overnight race.

Keating is excited to be racing for the 26th consecutive year. She started sailing in her 30’s, and what began as an enjoyment for cruising, soon turned into a passion for racing. She did her first race in a Hartley TS16, and continues sailing one today.

“We (she and long-term sailing buddy, Helen Doyle) started sailing with the Hartley Association,” Keating said. Hartley’s are old timber boats that were the first trailer sailer designed and built.

“There’s quite a contingent of them in Melbourne. We learnt to sail with the association and did our first Marlay Point, a drifter, with one of the members.

“The following year we came back in our own Hartley, and then we did about 10 Marlay Points with just the two of us on board, and only occasionally other girls. We tried to introduce friends along the way, but none of them ever came back a second time.

“The Marlay Point was the first race I ever actually entered. For us it is more about completing the race than actually winning,” Keating said.

“Our claim to fame is being the first all-female crew to ever complete a race. The year we did that there was a boat load of Noelex girls and we didn’t realise it was a thing until they announced them as being the first all-female crew and we thought ‘hang on, we’ve been doing it for years’. They pulled out of the race and we finished, so we said we’ll have that title thanks.”

That was about 10 years ago, in one of the rougher races the series has experienced and the girls were on their beloved Hartley TS16.

“Helen and I were fairly consistent sailing together for all those years. It’s only in the later years that we’ve split up and gone on different boats,” the Victorian skipper said, adding that she will return with Justin Green on her Hartley TS16 Moloka for the golden anniversary race next year.

Keating says while there used to be many Hartley’s entering the Marlay Point in the early days, there are only about five or six racing now. But they still enjoy some fierce competition between them.

Helen Doyle has since bought a Sunmaid, and while Julie has raced with her, she still prefers the challenges presented by the smaller timber boats, especially on the Marlay Point course. She admits it might be a little crazy, but she’s comfortable with that.

“There’s something about being on a little boat in the middle of the night, I like to be able to touch the water. We’re the mad ones,” she said.

Every year the Marlay Point continues to offer up different experiences for Julie, who considers it a pinnacle of her racing career.

“If you’re an outdoors person, there’s always the top of the mountain. Easy, fast racing is good fun, you know, it’s great to go round the sticks on a Thursday night. But there’s something more to being able to endure all conditions and navigate at night, although it’s much easier these days than it used to be. In the earlier days you virtually did it by sight. It was all about pitting yourself against the test.”

While many bigger boats dread passing through McLennan’s Strait, Keating says this is often where the Hartley shines. “A nice little broad bottomed boat can just slip down the middle while the bigger boats have to tack a lot. Sometimes this is a huge advantage.”

She has experienced many challenging moments in her 25 years of racing, including witnessing multiple dismasts at the start line in Lake Wellington some years. One incident that stands out was around their fourth attempt at racing two-up.

A storm blew in while passing Carstairs Bank at the back of Raymond Island. The 40kt breeze was too much for the Hartley and the jib sheet was lost. As Helen went forward to catch the sheets, Julie recognised the danger they were in and there was some out of character swearing from the helm.

It was soon decided that “the direction they were heading was the direction they were going”, said Keating, and they ended up on the beach. Disappointment set in as they realised they were out of the race, however when they finally took the time to look around them, to their amazement they saw about 30 other boats on the bank with them.

Friends in Paynesville caught the ferry across with food for a sausage sizzle on the beach. All crews bedded down for the night on their boats and sailed home in the morning. This is the only time the girls haven’t finished the race, and Julie admits that finishing the race year after year is something she is proud of.

Keating confesses she loves the Gippsland Lakes, calling it her sailing home. Often cruising with family and friends on the Lakes, in recent years she has been fortunate enough to experience offshore sailing, crossing the bar at Lakes Entrance with Peter Foxton on Shaynee to Deal Island, Flinders Island and Tasmania, enjoying the new challenges thrown her way.