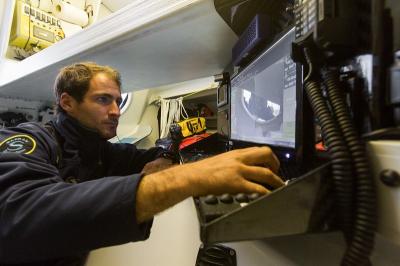 “When I set foot on dry land, I'm always surprised by the silence around me…” For Morgan Lagravière, to sail on a new generation IMOCA 60 is to be willing to endure an incessant din from which he needs to distinguish the familiar, even reassuring, sounds, from ones that should set alarm bells ringing. It is about finding the happy medium between vigilance and confidence. Here, Lagravière explains to us how he intends to handle an issue that will be ever-present in all his upcoming races on Safran monohull.
The acoustic comfort of a sailor does not seem to be a priority in the design of this type of boat…
Morgan Lagravière – Evidently. Architects and boat-builders have two basic rules when designing our machines: the hull must be rigid and watertight, which is possible thanks to the  carbon construction. At the same time, the objective is to produce a boat that is as light as possible, so, to achieve that, the interior fittings are stripped back to their most basic form. The result is that the skipper lives in a permanent soundbox, where all the noises are amplified, from the banging of the boat against the waves to the vibrations of the rig.
Are some noises more annoying than others?
M. L.  – The most annoying are the high-pitched sounds. For example, the foils generate a whistling sound as soon as the boat reaches high speeds. It's incredibly stressful, but it's also a sign that the boat is sailing well. As a sailor, you eventually come to terms with it. Fortunately, there are other sounds that can be reduced: for the rigging, the technical team has installed shock absorbers at the anchor points that reduce the vibrations. Similarly, the engine room is soundproofed. Some noises affect me less: a beating sail generates a wicked level of noise in the cabin, but because, in most cases, I'm on deck, in the middle of manoeuvre, I don't really realise it. But with a crew, someone would be in the cabin experiencing an unbearable racket.

Exactly how do you manage to distinguish the sounds that you should be worried about from the rest?

M. L. – Actually, it's pretty intuitive. Amongst all the hullabaloo, you eventually find a kind of harmony. You feel that the boat is at one with the elements, and that everything's well set, when the sound of the water along the hull, the slamming against the waves, and the whistling of the rig or the foils follows a certain rhythm. In the race, even when I sleep, my ears are still on watch. And if this balance of sounds is disrupted it's enough to immediately wake me up. For example, in the Transat Saint-Barth – Port-la-Forêt, the noise produced by my keel ram breaking, immediately alerted me to the problem even before the boat started behaving abnormally.

How do you stand the noisy environment? And look after yourself?

M. L. – Not easily! There are some noise-cancelling headphones now that cut you off from the outside world. And which prevent you from really hearing the boat. I tested some headphones that diminish the noises without filtering them out, but I don't really find I have the same sensitivity. However, you have to look after yourself. While sailing offshore, I've learned to listen to music, like the playlists my girlfriend makes me. This allows me to catch my breath, and escape things a bit. But I know that many sailors suffer from tinnitus for several days after a long sail offshore…

Listen to the sound of the Safran boat sailing here.