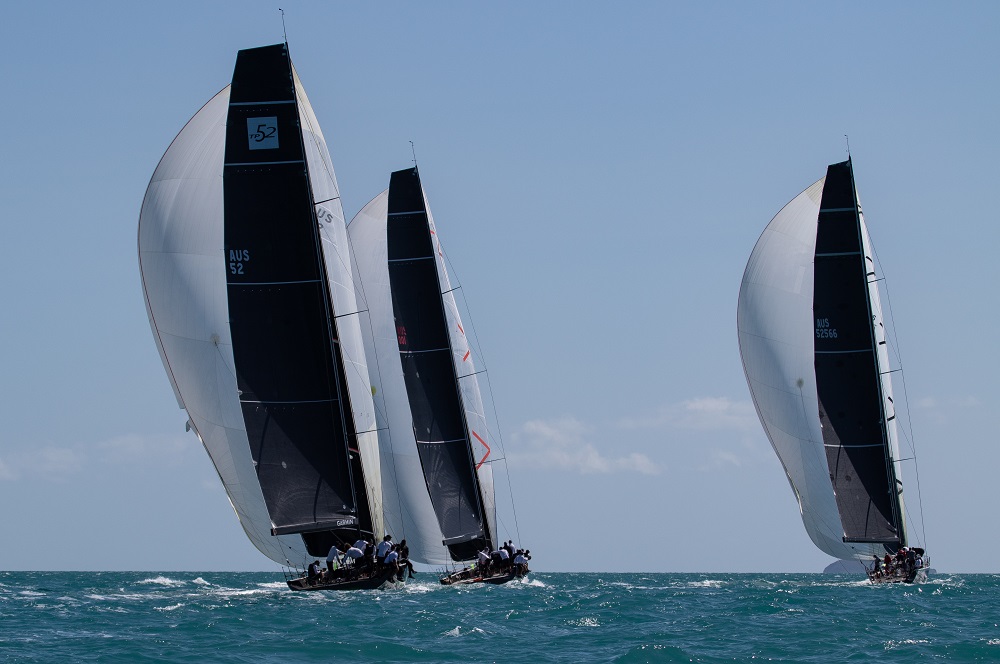 Day 5 of Airlie Beach Race Week Festival of Sailing and conditions during the morning were above and beyond the forecast 15 knots, the wind whipping seas up quickly and crews had to stay on their toes, then winds eased after lunch – another great day in paradise.

Our viewing platform for the penultimate day of the Whitsunday Sailing Club (WSC) organised event, was Alani, a luxury motor yacht.  We did it in style, could see all the action from the top deck, and the crew looked after us superbly.

Ray Roberts’ Team Hollywood was OCS in IRC Passage, but fought back to finish third overall behind Ichi Ban (Matt Allen) and Hooligan (Marcus Blackmore). Ichi Ban tops the leaderboard after five races with 12 points from Hollywood on 14 and Hooligan on 15.

Same for Luke Ratcliff’s Heat (NSW) in the Sports Boats. Unfortunate in the evenly matched field, but they sailed in clear air and finished that race third. In their division, Syzgy, (Errol Goodwin), retired with rudder and traveller damage.

In Multihull Racing, despite making a mad dash back to shore after breaking a pole, Paul Mitchell and his Ullman Sails crew returned and sailed to third – impressive. It left the gate open for Mitchell’s older brother Dale, who skippered Morticia (NSW) to a win from the local Dirty Deeds (Michael Van Der Zwaard).

In the Fareast 28 Nationals, Brett Whitbread and Pipeline Drillers (Qld) have drilled their way to the top of the pack, with four wins, until Drew Garnett’s Fareast, Valkyrie (NSW), took the win yesterday and again today.

The Nationals are being sailed inside the Performance Racing division and Whitbread would love to win both trophies. At the end of today, Goggles’ Mister Magoo was fourth to still lead Performance Racing from Pipeline Drillers by three points, while Valkyrie moves into third, another four points in arrears.

Goggles, from RQYS (there are five representing the club in this division, including Whitbread), is no pushover. He won the Trailables division last year, and has won other trophies at Airlie Beach Race Week Festival of Sailing.

“Joel and I have known each other since we were seven year-olds in in Sabots. We’re all a pretty good team. We gel well and always hit the ground running,” he says of their potent combination.

“We weren’t expecting to be as far ahead as we are, so it’s a nice experience. Now we want to see if we can take out both the Nationals and the Performance Racing Division.”

Whitbread has raced at Airlie Beach five or six times and says, “I keep coming back because it’s a pretty good event, great sailing and more affordable than others. As a place, it’s up there with the best in the world.”

In the Cruising Non-Spinnaker Division, Matt Doyle and his La Troisieme Mitemps (translates to The Third Half – the party after the footy game) crew (NSW) have their hands well and truly on the trophy. After winning today’s race, they boast a 10 point leader over local sailor, John Galloway’s QMS.

“We’ve exceeded our own expectations. We’ve had a couple of wins. This is our first year in the series. We have a guru tactician, Warren Taylor. I don’t know, but am aware of QMS and we’re good friends with third placed Still Dangerous – Ivor (Burgess) is from our club (RPAYC, NSW) and he has a great crew.

“Every day we have our own prize giving with a bottle of red wine – so far it’s three to us and one to Still Dangerous. Our aim, coming in, was to beat him, and now we find ourselves leading the pointscore by a large margin.

In other news, Dennis Lehany, whose trimaran Billy the Kid flipped on the course yesterday, has repaired the kite and says, “We’ll be back on the water tomorrow for the final day – we came here to race.”

All information including full results: https://www.abrw.com.au/