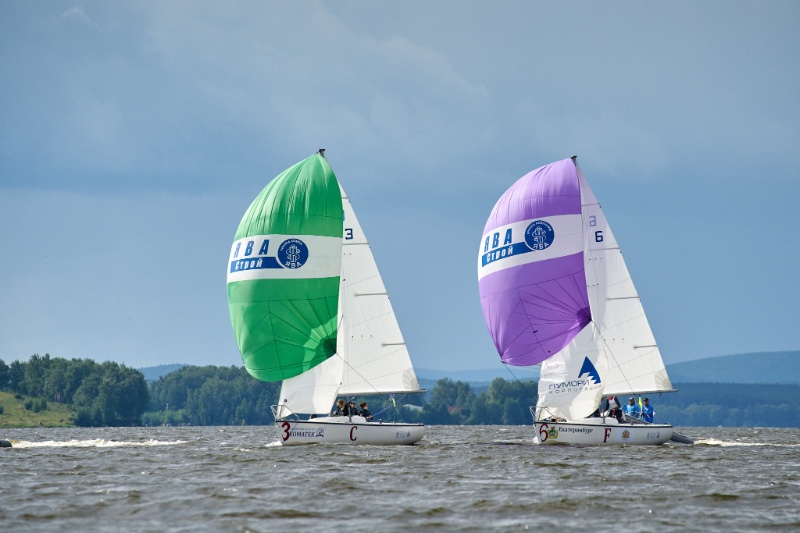 The second day of round robin sailing in Ekaterinburg, Russia, at the 2018 Women’s Match Racing World Championship saw a change of conditions as the first four teams punched their tickets for the Quarter Finals and will wait for the other four.

After sailing the first day of the round robin on a mirror with very light and very shifty breeze, the second day dawned with the flags around the Gubernskiy Yacht Club – Komatek whipping in the strong breeze blowing across Verkh-Isetsky pond from the Ural mountains. Most of the teams welcomed more wind as the first day challenged their patience. The morning flights were sailed in 8-12 knots of wind from the northwest. “The breeze was still shifty, but it was definitely more stable than yesterday,” said Swiss skipper Alexa Bezel during a midday break.

One of those happy sailors at the end of the day was Ekaterina Kochkina, skipper of the ProKaTeam Sailing Team from Ural, who had successful day two of the Championship and qualified for the Quarter Finals. “Today was a good day. We sailed with a lot of confidence as we have perhaps more experience in these boats than some of the international teams. And maybe we also had some good luck,” laughed Kochkina. Their spot in the Quarter Finals was not decided until Bezel lost the last match of the round robin to Trine Palludan.

On top of the round robin was the defending World Champions, Team Mac, with skipper Lucy Macgregor for Great Britain. “We had a fun match with Trine Palludan’s team. The pre-start was aggressive and we knew it would be important to get a penalty on them in the pre-start as they are such a strong team. We did just that as they tacked too close to us just before the start and we were able to lead off the start and stay ahead,” smiled Macgregor at the end of the day.

An added bonus to the day for Macgregor is winning the World Sailing Nucci Novi Ceppellini Memorial Trophy. The trophy is named after Ceppellini, World Sailing Vice-President from 1998-2008, who passed away in February 2008 after many years dedicated to the sport, with women's match racing one of her particular passions and is presented to the first-place skipper following the first stage round robin. Macgregor also won this trophy last year in Helsinki, Finland on her way to winning the Championship.

Joining Macgregor and Kochkina in the quarter finals are French Pauline Courtois (Match in Pink by Normandy Elite Team) and Danish Trine Palludan (Team Kattnakken) who ended the round robin stage in second and third, respectively.

With the first stage complete, the first four quarter-finalists are set. Tomorrow the bottom seven teams will sail the Repechage Round Robin stage and the top four will complete the Quarter Final pairings.

The racing continues Thursday through the conclusion on Saturday 18 August.