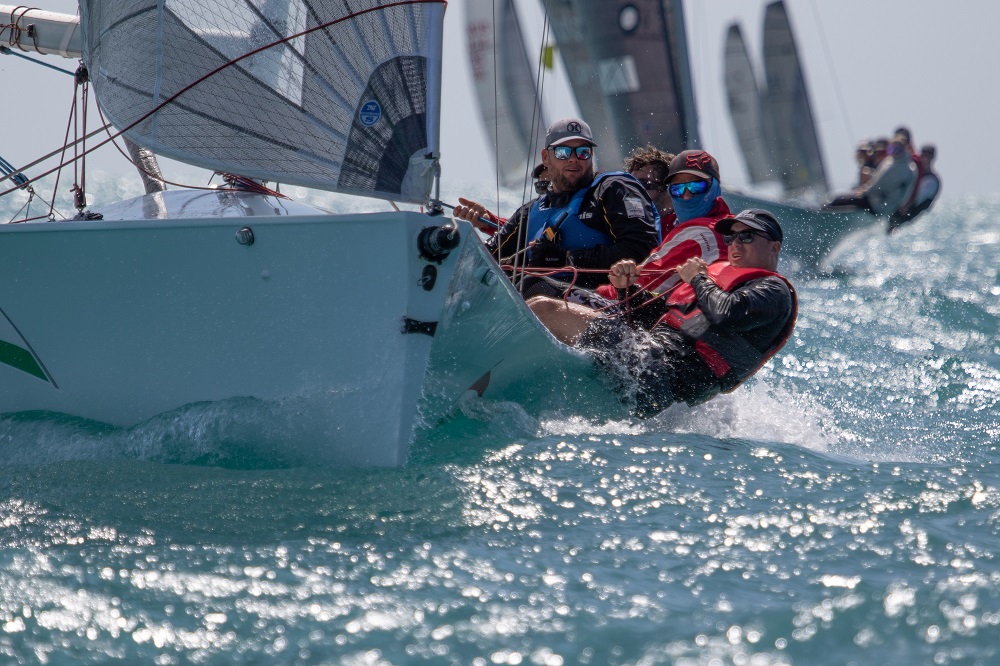 A sports boat limped home under motor after breaking its rudder, while other boats broached in up to 25 knots wind with gusts, their crews finding it difficult to control their rides – all part and parcel of the forecast superb windy conditions that arrived in time for Day 4 of Airlie Beach Race Week Festival of Sailing.

Heat, the Viper 640 sports boat owned by Luke Ratcliff and family, suffered a broken rudder. The experienced sailors arrived safely back at Whitsunday Sailing Club (WSC), which hosts the event, and all on board were fine. The remaining sports boats flew around the course, their crews enjoying the exhilarating rides.

As expected, the pair of TP52s in the IRC Racing division thrived in the big conditions and had an epic battle.

Allen’s win puts him at the top of the leaderboard. Hollywood Boulevard is second, but on equal points with Ichi Ban, with Hooligan third. All three are from NSW.

“Really good sailing,” said Allen from Sydney’s eastern suburbs. “There was less wind in Pioneer Bay at the end than there was when we started in 18-25 knots.

“We had a lot of water coming over the deck and were sitting on 17-20 knots all the way going north into the Whitsunday Passage and round the back of the Molles. We continued on coming round the north end of Molle coming back into Pioneer Bay,” Allen recounted.

“Hooligan hung onto her spinnaker a bit longer and sailed lower. We sailed higher after dropping ours – and lifts came through that worked for us. It was boat on boat with Hooligan and ourselves for ages.”

Ichi Ban’s owner said the going was “a bit bumpy” at White Rock, a bit easier for the bigger boats such as his.

“It was good to have good upwind, downwind, reaching and gybing around the current and the wind shear around the top of the Molles. It was warm and wet.”

The multihulls were also making an impact, with Ullman Sails and Morticia (sailed by brothers Paul and Dale Mitchell respectively), drag racing the rest of the fleet downwind.

It was not the most fun day for the little Trailables, which were bashed around a bit. Masquerade, Tom Vujasinovic’s local (WSC) Masrm 750 won the race to be placed second overall, but John Fowell’s First Born (Qld) has increased her overall lead to six points after finishing fourth today.

“Today was survival mode – not Trailable weather,” Fowell said this afternoon. “We sailed very conservatively so we could finish in one piece. I didn’t pull out the 23 year-old spinnakers, didn’t want to end our chances for the last two days. They’re much better in softer winds,” he said laughing.

Fowell, from Queensland, said he was surprised to find First Born, a Lidgard 795, in the lead: “I only bought her recently as a bit of a wreck and we fixed her up. We’re very excited she’s going so well – it’s totally unexpected, but very nice.”

He has sailed here previously with two different boats. “We’ve finished with second and thirds – the only thing missing is a win. Hopefully this time.”

Shifty south-easterly winds of 15 to 25 knots with 30 knot gusts were reported and winds eventually bent around to the east. Some sailors were out of their comfort zones following the milder conditions of the past three days.

The testosterone was alive and well, with yelling heard from boats on the various start lines, amid a couple of General Recalls as some were pushed over the start early when they tried to position themselves for a good start.

The whipping and pulling on of sheets was loud and the seaway a washing machine – but let’s face it, this is the type of weather most racing sailors’ dream of and live for.

Tonight crews are gathering at Whitsunday Sailing Club for the evening prize giving before being entertained by Chris Matthews. A lot of stories from the day are already being discussed.