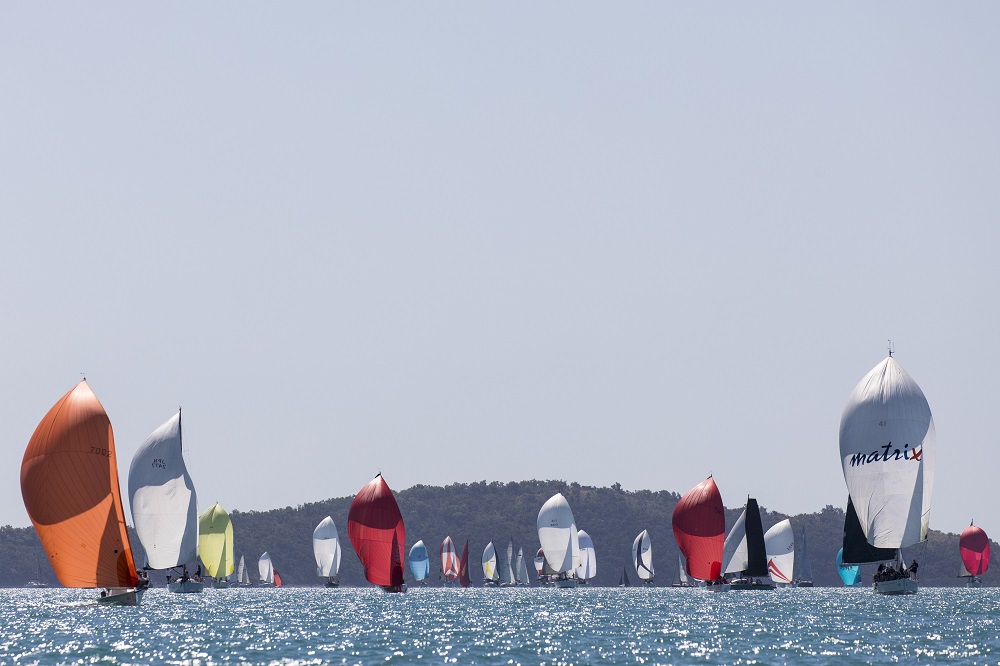 Three days of racing at the 30th Anniversary Airlie Beach Race Week, three different types of conditions and today’s was champagne sailing, with light 7-9 knots around the course on Pioneer Bay for the entire fleet.

“It kind of worked out alright – interesting course – good breeze all round. Wind shifts meant it wasn’t the most tactical, there weren’t too many passing lanes, it was a good drag race,” Allen said. “The start was probably the hardest. A couple of boats were OCS, Hooligan one of them, as it was biased at the pin.

“Having all the fleet on Pioneer makes it hard to find clear air – you just had to find what you could. I was glad we got a race in and it was good they held us ashore until there was breeze,” he said of the average 7 knots that at times reached 8½, with pressure increases all around the place.

Allen reminded, “We’re racing the whole fleet – not just Hooligan. The two of us have to make sure we don’t slow each other down too much by burning each other up. Team Hollywood is leading our class, they’re sailing well.”

Ray ‘Hollywood’ Roberts continues to lead the pointscore with his Botin 40, Team Hollywood, from Ichi Ban and Hooligan by two and three points respectively with 3-2-3 results.

“The guys on Victoire are close to us on boat speed. They got ahead of us today until they had a bad kite drop. It ended up in the water and we couldn’t avoid a collision with them, so did a 720 penalty turn,” Roberts from Sydney explained.

His team includes some of his recent Phuket Raceweek winning crew, plus others such as Olympian Bobby Wilmot, with David Chapman on tactics. They will be out practicing on the lay day, “because even with this talented crew, mistakes were made, as not all have sailed as a team before.

“We also want to prepare for next week’s races, which are forecast to be windy. I think to sail well, you’ve got to be spending time on the water. The more time you spend, the better you get. Time on the water is vital,” Roberts ended.

Damian Suckling’s Another Fiasco from WSC is always well sailed so it was no surprise to see him in top place in Race 3. However, it’s Graham Fortado’s Matrix (Qld) at the top of the leaderboard after three races with a two-point lead over Chris Carlile’s Nautical Circle (NSW).

“We’re having a lot of luck at the start and come off it clean,” said Matrix’s navigator, Ben Davis. “Managing to keep the crew working together for the same outcome, getting into the right position on the course and keeping the boat moving is imperative,“ he said.

Brett Yardley and his crew have sailed all the way from Adelaide for the past two years to attend Airlie Beach Race Week Festival of Sails on ‘Offshore’. “It’s been worthwhile, as they currently lead Cruising Division 3 by two points from WSC local, David Lund and his crew on Crossbow and David Turnbull’s Matangi (Qld).

Offshore is sailing better each day. “We like flat water – that suits us, particularly today,” Yardley said. “We have the sails working well and are getting really good starts. We’ll be looking to tweak our small sails on Tuesday in preparation for forecasted strong winds.

Yardley’s crew has been having great racing with Mistery – neck-and-neck around the course – and She. “We’ll be keeping a close eye on her,” he said of Phillip Bell’s She from Queensland, which won today’s race.

“We’re from Adelaide and bought our boat all the way for the last two years – a long way. It’s an escape from Adelaide’s winter – the best place to be at this time of year and lots of cool people to sail against and mix with,” he said.

In the Trailable Yachts, John Fowell has somewhat of a runaway lead with First Born from Queensland. The Lidgard 795 has excelled across all conditions over three days with wins in Race 1 and Race 3 and a second in Race 2. His nearest rival is Colin Clark’s Beal design, Unbealeievable, five points adrift of the leader.

With light winds come a collision or two, and so it was today, so all results are provisional at this stage, with protests being held. Tomorrow is a lay day.

All information including full results: https://www.abrw.com.au/