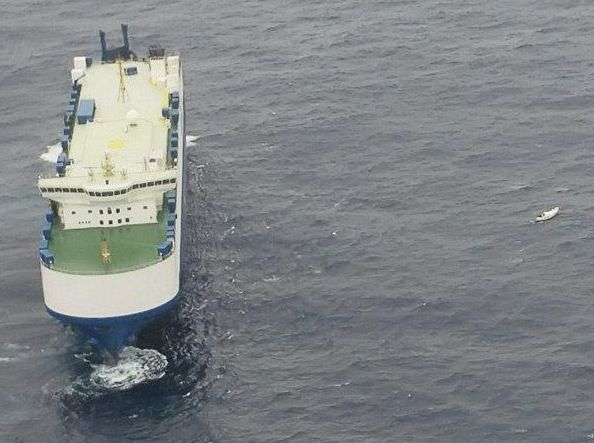 A solo yachtsman has been rescued by a merchant ship 2100 kilometres west of Perth.

The yacht had been conducting an around the world trip when it lost its mast in heavy weather on Thursday night.

The solo yachtsman activated an emergency signalling device which was relayed to AMSA by the International Emergency Response Coordination Centre in the United States.

AMSA requested the yachtsman to activate his emergency beacon and issued a broadcast to shipping in the area.

The broadcast was answered by the United States flagged Car Carrier Patriot which changed course to assist.

Due to the distance offshore, AMSA chartered a Falcon 900 jet aircraft from Perth with a Western Australia Police officer on board to fly to the search area.

Both the Patriot and the jet arrived on the scene at about 1230 AEDT on Friday where the jet oversaw the rescue operation.  The sailor was brought safely on board the Patriot at 1320 AEDT.

The yachtsman was confirmed to be in good health, and the Patriot has now resumed its journey to Fremantle where it will arrive on 20 November.

AMSA would like express our sincere thanks to the Master and crew of the Patriot for answering the call for help and rescuing the yachtsman in difficult conditions. Due to the remote location, their assistance was vital in this successful rescue operation.