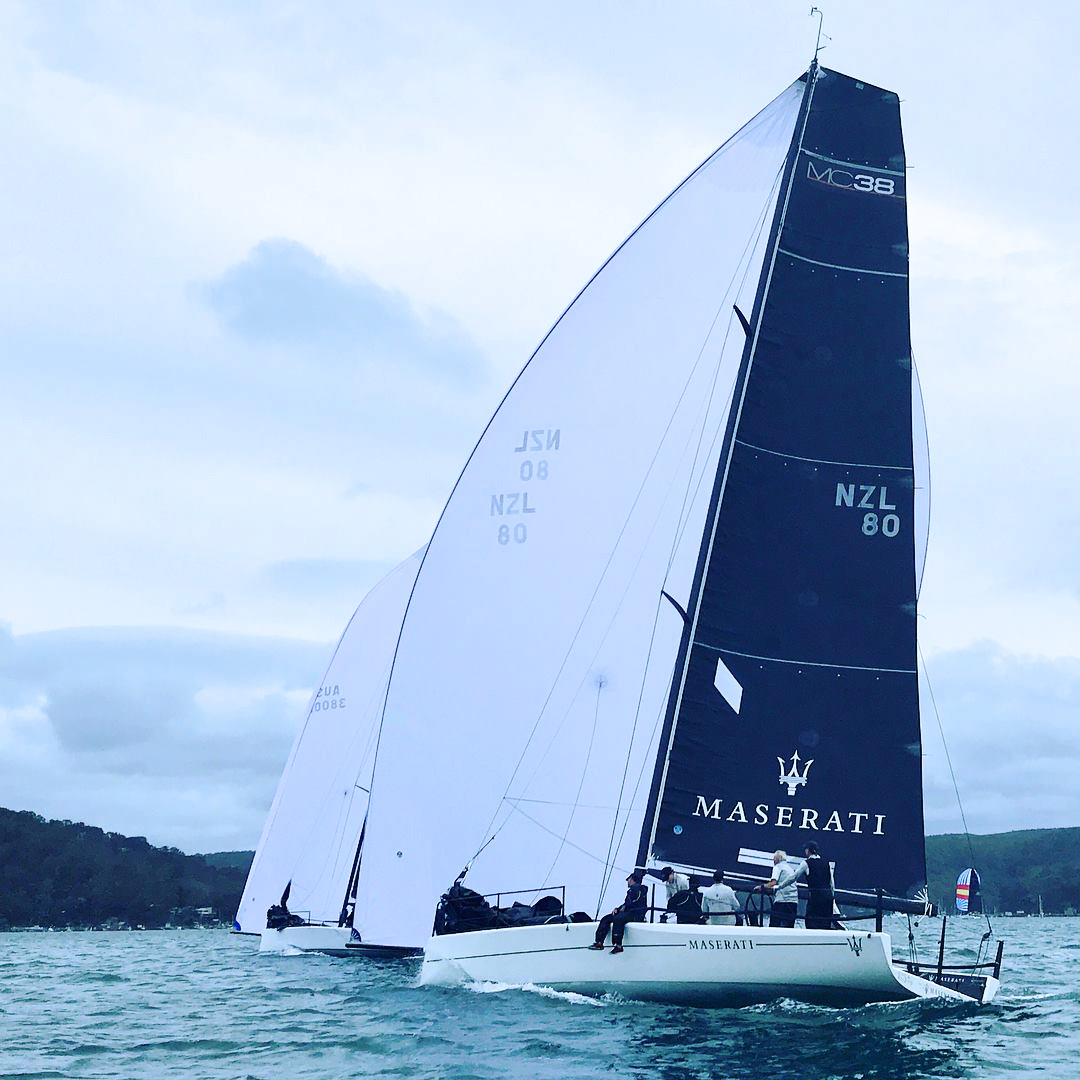 Neville Crichton’s Maserati was on par with Hooligan until the last race of the day when they went polar opposites; a third bullet for Hooligan and a last place for Maserati as “the wheels fell off,” admitted tactician Joe Turner. Maserati shifted backwards, joining a three-way points tie with Steve Barlow’s Lightspeed and Leslie Green’s Ginger, and creating a handy six point buffer for the leader.

Patchy Pittwater blew east-north/easterly up to 25 knots on the track just north of Scotland Island.

“The breeze was anywhere between 15 and gusts of 25 knots and it was actually a really good day,” Slingsby commented.

“In the big puffs obviously you had to hold on, but in general it was perfect sailing for the MC38s; shifty, flatwater and surfing downwind. We had some good starts and Marcus had a lot of fun. He was right on the ball with his driving.”

Slingsby wrapped up the Milson Silver Goblets Etchells regatta on Friday. A quick change of crew shirt and a few more bodies around him and he’s part of the Hooligan program the next day. Late next week he heads to Melbourne to sail solo on a Finn at Sail Melbourne.

Speaking on the level of expectation on him these days compared to the program he’s just come off – tactician for the defeated Oracle Team USA at this year’s America’s Cup – the quietly spoken redhead with an Olympic Laser gold medal and AC win in San Fran on his CV says it’s a different state of play.

“The thing is I’ve always got high expectations on myself, but yes, when you get off the water and you’ve had a bad day there’s not 100 million people who have been watching. There might have been five or six spectators.

“I enjoy all this, I did it before the AC and long after the AC I plan to be doing this stuff around Australia. I’m trying to get in a lot of sailing.”
said today’s conditions marked a big comeback to class racing for Crichton, who sat out the last few regattas though Maserati went out with guest drivers.

Chris Way is currently overseas and his boat, Easy Tiger, was helmed by veteran yachtsman Mike Green. Their best result was a second in the longer fourth race.

Three more races are scheduled for Sunday November 19 in a 12 knot easterly, the first due to start at 1100 hours under race officer Steve Merrington and his RPAYC race management team.