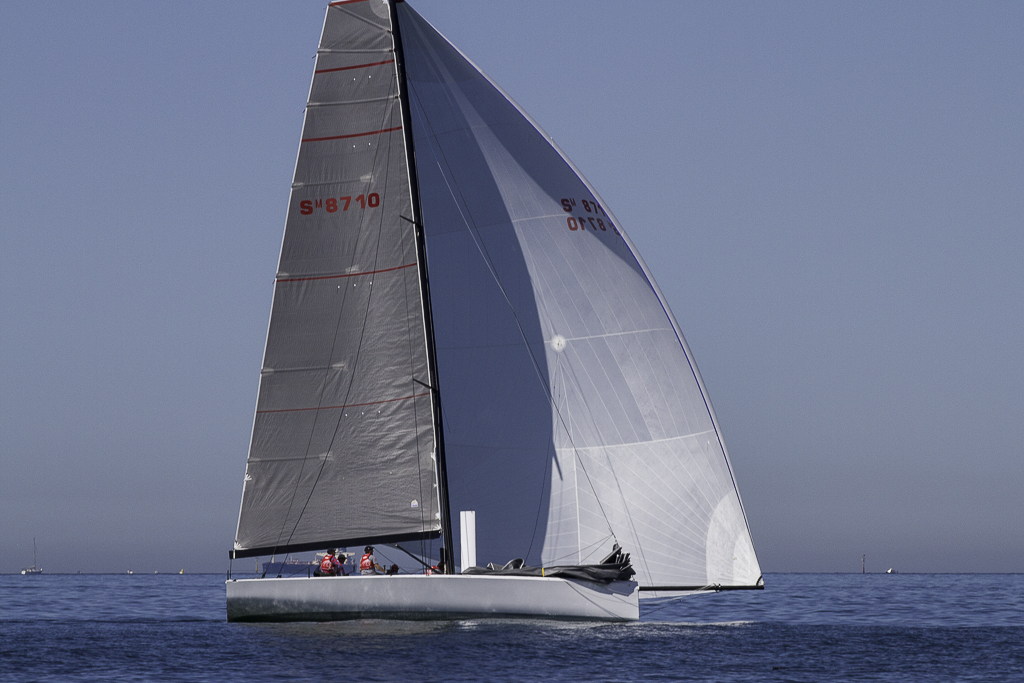 The Shaw 11 Akatea in the Lipton Cup. Photo Bernie Kaaks.

After heavy rain and thunderstorms swept across the Bay yesterday evening, light breezes created havoc during the early stages of today’s Long Race of the Lipton Cup Regatta on Port Phillip. Hosted by the Royal Yacht Club of Victoria, assisted by the Williamstown Sailing Club and the Port Melbourne Yacht Club, the regatta attracted solid numbers, a great relief to the organisers who were nervous about entries with just a couple of days to go.

A shifty easterly breeze greeted yachts at the start and many ignored the basics of staying near to the start line in such conditions and paid the price. Those that worked it out correctly were away to a flyer, leaving some fancied runners well behind.

In the AB fleet, Akatea performed as expected, using her canard to great advantage for both height and speed. So dominant was her performance today that the second boat was not yet in sight when she crossed the finish line in 3 hours and 2 minutes, a full hour and 10 minutes ahead of the J111 Joust, which was second over the line. Ikon had a miserable first half, struggling with the light conditions and despite being third over the line, finished well back on both handicap systems.

Despite today’s setback, Ikon did enough in yesterday’s three races to reclaim the Lipton Cup – a trophy that slipped from Bruce McCraken’s grasp after presentations last year. Mike and Mark Welsh’s First 40, Wicked was second overall, sharing a score of 15 with Tim Olding’s Summit 35 Vertigo.

The Hobsons Bay based S80 Moonraker finished on top of the Division C points table two points clear of Calum Brenan’s Lucy in the Sky with another S80 Gravitas, sailed by Paul Larcher a further three points back in third place. Moonraker owes her success to today’s strong performance, claiming first place on handicap.

The Bluebird fleet scattered in the light breeze. Several yachts decided not to start today while two of those who did failed to finish. Several of them were still on the pre-start side of the line when the next fleet in the sequence started. It was certainly a very tough environment for these little classics. Panacea was consistent on day 1 so her second placing in today’s race elevated her to the top of the ladder with 12 points. David Barnett’s Nunyarra can thank his win today for finishing second with 15.5 points ahead of Samantha and Paige’s Blue Volvo on 22.

Fred Kasparek’s VX 1 Weapon of Choice was the best of a very close bunch of sports boats to finish a single point ahead of Chris Dean’s Scab VXA and Troy Croft’s Kaos Racing, who needed a countback to separate them.

Peter Langford and Tony Spencer combined well in the Archambault 35 Moneypenny today, leading home their big brother, the Archambault 40 One for the Road, sailed by Gary Prestedge. Their heroics counted for little however, as Ray Borrett’s Laurelle, with a fourth place today, won the series with 5 points with the little Beneteau First 30 Boobie Trap, sailed by Duncan Russell, scoring a second on 8 points and Michael Pointon’s Vitesse third with 10 points.