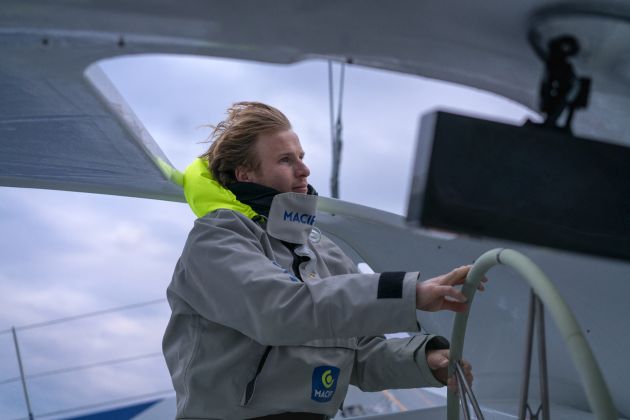 Less than two days after pulverising his own 24-hour distance record (851 miles), François Gabart crossed the longitude of Cape Agulhas on Thursday morning at 08.25 AM (UTC+1), which marks the entrance to the Indian Ocean, after just 11 days, 22 hours and 20 minutes at sea. This is an incredible time, since not only has the MACIF trimaran skipper improved the time it took the current record-holder Thomas Coville to pass this point in 2016, by 2 days, 6 hours and 24, but he has also set the best time outright at Cape Agulhas, single-handed and with crew combined.

This performance by François Gabart in the South Atlantic is outstanding. The MACIF skipper crossed the Equator on Friday 10 November, after 5 days, 20 hours and 45 minutes at sea, slightly behind by 3 hours 35 minutes on the time set by Thomas Coville one year earlier. He then sailed a high-speed diagonal course from the Equator to Cape Agulhas. This Thursday morning, at 08.25 AM he entered the Indian Ocean (he rounded the Cape of Good Hope at 06.15 AM) after 11 days, 22 hours and 20 minutes, which is 2 days and 24 minutes ahead of the time set by Sodebo in 2016, which he beat by roughly two and a half days in the South Atlantic.

Better still, on this section from Ouessant to Cape Agulhas, François Gabart has set the best time outright, single-handed and with crew combined, achieving a better time than Banque Populaire V, which took 11 days, 23 hours and 49 minutes to enter the Indian Ocean, in the Jules Verne Trophy in 2014, with a crew of 14 men on board. This is a difference of 1 hour and 29 minutes in favour of MACIF! In all, François Gabart took 6 days, 1 hour and 35 minutes to belt down the South Atlantic. Once again this is a new outright reference time, since Banque Populaire V, the fastest on this Equator-Cape Agulhas section up until now, took 6 days, 8 minutes and 54 seconds, in 2011, while Thomas Coville’s time, in 2016, was 8 days, 11 hours and 33 minutes!

To reach such speeds, MACIF had perfect weather conditions, with a St. Helena anticyclone off to the east and a good low-pressure area off Argentina to drive him forward, which meant he could cut straight through, instead of having to go round, by sailing along the South American coast. At the same time, despite a broken batten, which meant he had to lower the mainsail for a quick repair job, the skipper drove himself very hard, conscious of the opportunity to reach South Africa in a record time. He is now in the Indian Ocean with a comfortable lead on Thomas Coville. This will be a great help, as Coville crossed the Indian Ocean in record time (single-handed) last year, in 8 days, 12 hours and 19 minutes.