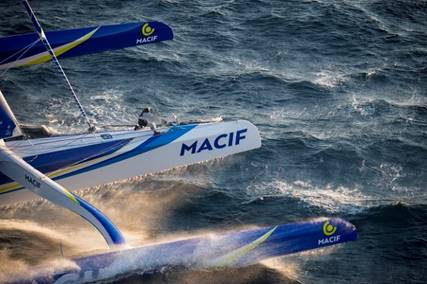 On Thursday, François Gabart entered the Indian Ocean in a record time of 12 days, 22 hours, and 20 minutes, but this Friday he is taking advantage of calmer weather to rest up and give his boat a once over.

MACIF’s skipper seemed very confident this Friday morning, telling us about the sensations on board, his intimate knowledge of his boat and about his strategy for the Indian Ocean.

How were the first 13 days of this record attempt and how did the fast sail down the Atlantic go?

François Gabart: “It went very well. This first part of the record attempt is very positive. It is one of the best ocean racing experiences that I have ever had, with incredible sensations in terms of speed, and in fact, everything that I love.

“I had a little luck in the South Atlantic. It was amazing that everything followed on so well, opening up ahead of me off the coast of Brazil! Sometimes it can take years to enjoy such conditions. However, it is mentally and physically demanding, requiring great concentration, but that’s also what I’m looking for.”

How did familiarizing yourself with the boat after the start go?

FG: “I had to do it in a hurry. When you set sail, you’re still not very sure of yourself. You question the angles, the sale configurations, you know that there is swell, currents, rocks… A lot happens inside your head in these first few hours of sailing and then things immediately speed up. I accelerated to 40 knots. So, you don’t have a choice, you find your bearings quickly and adapt to the limitations of your boat.

“The more you sail the more you gain confidence. I was lucky to leave in daylight. I had the whole day to familiarize myself with her. I was much more confident when I reached Cape Finisterre and from that point on everything played out well.”

Are you still surprised by the MACIF trimaran’s performances?

FG: “Yes and no. On the one hand, I know that she is capable of very high speeds, but on the other, the ease with which I reached these speeds is a little disconcerting. When the weather conditions are good, she is easy to sail at 40 knots and she sails really well between 37 and 42 knots, without there being any danger.”

Are you happy about the technical choices in Macif’s cockpit, with this completely protected cabin?

FG: “One thing I definitely do not regret is the deck plan and the cockpit. You really need to be protected in the weather I’m sailing in. At the start of the 24-hour record, I was wearing crocs and shorts at 40 knots! I feel very safe in the cockpit. This is really important if you want to be able to go fast. You say to yourself that even if the worst should happen, you are in an enclosed space and that’s reassuring.”

You have been at sea for 13 days now, a record for you on the MACIF trimaran. How are you coping with the solitude?

FG: “I’m coping well. I’m beginning to have my little routines, taking care of the boat as I did with the Imoca in the Vendée Globe. I am now in relationship in which it’s just her and me. This fosters a great connection and a certain intimacy that you don’t have with the crew and that you don’t have the time to have during shorter races.

“I am not talking to her yet, but it won’t be long before I am. Otherwise, I’m not affected by the time, as the days go by very quickly. That said, so far I have been in regions where I’m not completely alone. In the coming weeks, there will be absolutely nobody, with maybe a few people here and there around the islands of Crozet and Kerguelen, otherwise nothing. But that doesn’t bother me all that much.”

What is your mindset as you approach the South Seas?

FG: “It’s a little like when you are a kid and you are at the top of a slide. You lurch forward and you’re off, and there’s no going back. There is a time that comes when the shortest way home lies ahead of you. I really feel like I’m being sucked in. It’s slightly daunting, but at the same time it’s incredibly exciting, because you know it’s going to go fast. What’s more in 80% of my dreams, I’m doing something involving surfing.

“Here, it feels like South Africa is at a higher altitude than Cape Horn and that I will slide all the way down to Cape Horn. This said, I know that there will be a few bumps along the way.”

What sailing conditions are you experiencing now you are in the Indian Ocean?

FG: “I am currently crossing a ridge of high pressure, an area of flat calm that connects with the low-pressure system that drove me this far, and the Indian Ocean will take me to another low area coming in from Madagascar. This is a strong low-pressure system. Ideally, I should pass ahead of it, but I probably won’t succeed, so I may have to stay behind. And to stay behind, it is best to let it pass and try to follow it, rather than enter it and be overtaken by the low pressure.

“This means that once I’ve got on the right side of the high-pressure ridge, I will slow down for a few hours to let the worst of the low pass and then get moving again. I think it is the first time that I have had to wait while racing.

“That part of what it’s about and there are times when you just can’t get past. I am going to take advantage of this to give the boat a once over, do some small jobs and finish repairing the batten. I’m also going to rest up as much as possible so that I can get straight back in there after this low-pressure area, because it’s likely to be hard work.”

Last year, Thomas Coville sailed across the Indian Ocean very fast. How do you see your crossing?

FG: “It’s difficult to say, because this low-pressure area is making a big mess of things. Since it is going to be in front of us for quite a while, this is what’s going to set the pace. Ideally, it would have to progress sufficiently fast in the right direction, for us to maintain good speeds behind.

“The models are not spot on, but you can be sure of one thing and that’s that there won’t be a record on this section of the course. At best we will achieve a reasonable average.”

After nearly 2 weeks at sea, how do you feel physically and mentally?

FG: “I’m in great form. I slept well during the night. I don’t think I am in the red sleep wise. And as for how I feel, well naturally I’m all set to fly. I reached the Cape of Good Hope in less than 12 days and it was a wonderful experience on this magnificent boat. If I was feeling down, something would be seriously wrong.”