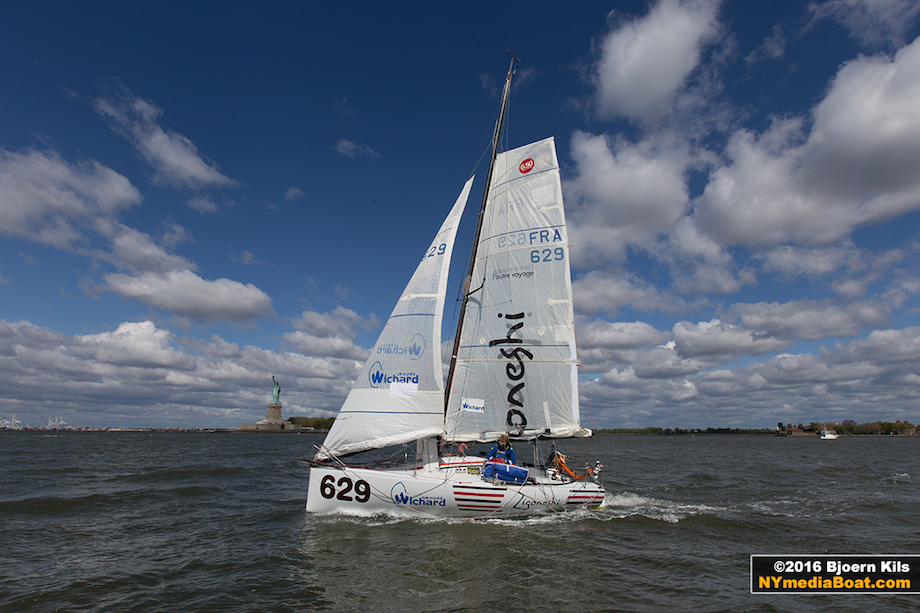 Olivieri Jehl in New York Harbor on board his 6.5 Mini. Credit: Bjoern Kils.

A solo sailor attempting to break a transatlantic record with his 21-foot sailboat had to be rescued by the Coast Guard just hours into his journey on Sunday.

French sailor Olivier Jehl was attempting to sail the popular yet treacherous route from New York to Lizard Point, England on his 6.5 Mini-class sailing vessel in just 15 days or less. If successful, the journey would have set a North Atlantic sailing record for the smallest boat to make the journey, and in record time.

But just hours after departing from New York Harbor on Sunday afternoon, the Coast Guard received an EPIRB alert from Jehl indicating that he was in trouble and in need of rescue.

A Coast Guard helicopter from Atlantic City, New Jersey arrived at his position just after 6 p.m. Sunday night to discover that his boat had sunk and that he was inside his inflatable raft.

A look at a tracking map showing Jehl’s last position showed that he made it just 90 miles or so from Atlantic City before he had to be rescued.

According to the Coast Guard, it appears that his boat may have hit a submerged object, causing it to take on water and sink.

See more images and the track of the journey here.