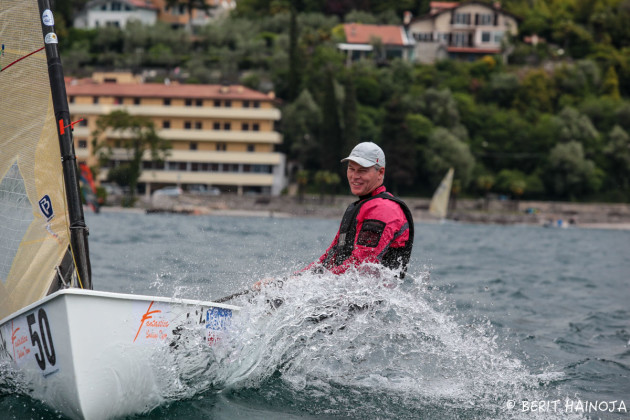 Nothing can separate the top two sailors at the Finn World Masters in Torbole. Rafa Trujillo (ESP) and Vladimir Krukskikh (RUS) continue to collect race wins and now have six apiece with two races to go. Mike Maier (CZE) stays in third after a third and first.

Otherwise it was an interesting day on Lake Garda with several new race winners. Dimitri Petrov (RUS) and Christoph Burger (SUIR) won a race each, as did Marc Allain des Beauvais (FRA), who followed that with a second place to move up to fifth overall and has all but clinched the Grand Grand Masters title.

Tonight the sailors enjoyed a wonderful championship dinner at a pizzeria in Arco, near where many of the boats have been based. Feeding five hundred people is no easy task. When more than three hundred are Finn sailors, it becomes an Olympic challenge.

Inclement weather and light winds were forecast for Thursday so a change to the programme was made to run two races on Wednesday.

Coming ashore after 18.00, it was a long day in the water, with for the first time postponements afloat and even some general recalls. The wind was the shiftiest it has been all week, with several sailors making big gains and losses. There were also numerous start line infringements with the black flag flying for the first time.

Keeping consistent is proving hard for the majority. With four huge fleets choosing the correct side is crucial. For example on alpha course, closest to Torbole, the fleet has favoured the left all week, while a few have made gains on the right. By the second race today at least half the fleets were heading right into the cliff to pick up the favourable shift.

Even though the sailors were tired after two tough days the competition was no less fierce. Lighter winds were forecast but it still picked up to 20 knots, though by the end of the day it was down to 4-5 knots which proved challenging for the fleet that still had the Oscar flag displayed for free pumping.

The day began with the Annual Masters Meeting where sailors heard about the ongoing growth of the class, the work being done with media and event management and a presentation about next year's Masters in Barbados. The meeting also voted on the 2018 venue. The class was in a very fortunate position to have excellent bids from two experienced and attractive venues. As expected the vote was close, but the meeting chose to hold the 2018 World Masters in Balis, near Barcelona in Spain.

Norway is fielding two sailors this week. Petter Fjeld (NOR) is in 53rd and Ola M. Johannessen (NOR) is in 281st. Norway is just one of 32 countries represented this week from Argentina to Ukraine, from Norway, Russia and Canada in the north to Chile, South Africa and New Zealand in the south.

Over the course of this week, Finn sailors from almost every corner of the globe are racing together in friendship and love of a great boat that has influenced all aspects of sailboat racing worldwide. The sailors here are past the Olympics but enjoy sailing an Olympic class that has brought them so much enjoyment over so many years. There is even one sailor here over 80 – Pedro Jiminez- Meifren (ESP), a Super Legend – who completed both races on Tuesday when sailors half his age did not. You have to respect that.

Finn sailors worldwide aspire to race against the best, but they also aspire to race the Finn World Masters. Even now, more and more are promising to sail next year when the event heads to Barbados. The pinnacle event for these sailors just moves to a different standpoint, but the challenge is the same.

On Lake Garda, battle resumes on Thursday at 12.00 with one race scheduled. The forecast is for light winds and rain.

Dinner in Arco tonight was arguably the largest Finn dinner of all time. After three tough days, the sailors deserved it.