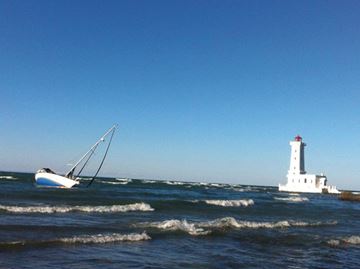 “We were paged out by JRCC (Joint Rescue Coordination Centre) in Trenton at 3 a.m. for an 11-metre (37-foot) sailboat taking on water,” said coxswain Sheila Lindsey, from the dock at Sugarloaf Harbour Marina in Port Colborne.

She said the U.S. Coast Guard out of Buffalo, NY was also deployed.

Lindsey, with crew members Norm Dashwood, Ian MacGregor and Dan Patey, said the unit was most of the way to Point Abino when it was informed a person on the sailboat had abandoned ship and was in a grey dingy.

“The US coast guard was first on scene and rescued the person,” she said, adding they were told the sailboat operator was an American citizen and would be taken back to Buffalo.