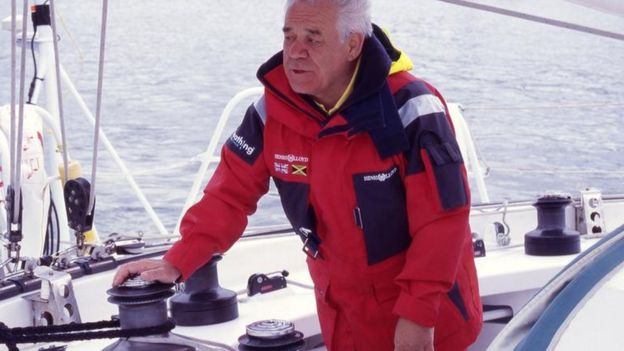 BBC News reports that British yachtsman Tony Bullimore has died at the age of 79. He had been diagnosed with a rare form of cancer.

His name became widely known, especially in Australia, after he spent four days in the capsized hull of his yacht Exide Challenger in the Southern Ocean during the 1996/97 Vende Globe Race. He was eventually rescued by the Australian Navy ship HMAS Adelaide on January 9, 1997 after surviving on chocolate bars and water in an air pocket in the hull.

Last year marked 20 years since the rescue, which was estimated to have cost $6 million. It took place 2500km away from the Australian coast at a point near 52deg S and 100deg E and also involved another Vendee competitor, Thierry Dubois, whose boat had also capsized. Both men were taken to Perth by the ship.

According to the BBC report, Mr Bullimore moved to Bristol in the early 1960s and married Lalel, a West Indian immigrant with whom he opened the Bamboo Club, which hosted Bob Marley.

Bristol's Lord Mayor Cleo Lake paid tribute to Mr Bullimore, whom she called “a Bristol legend both on the waters and on the music scene”.

The Bamboo Club, which opened in 1966, attracted many of the big names in reggae and offered a place for people of all backgrounds to socialise safely. It hosted stars including Bob Marley and the Wailers, as well as Ben E King, before it closed 11 years after opening because of a fire.