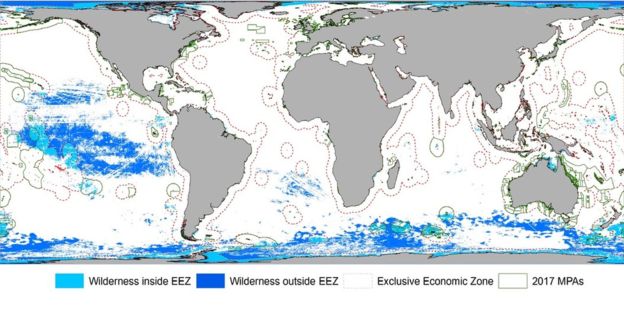 Scientists have mapped marine “wilderness” areas around the world for the first time. These are regions minimally impacted by human activities such as fishing, pollution and shipping.

The team, led by researchers in Australia, found that just 13.2% of the world's oceans could be classed as wilderness – most in international waters, away from human populations.

Very few coastal areas met the criteria, including coral reefs. Reefs are some of the most biodiverse habitats in the ocean, as they are home to a great number of different plant and animal species. They are thought to be vital areas for marine life.

What makes a wilderness?

“It's a place where the environment and ecosystem is acting in basically an undisturbed way that's free from human activity,” explained lead author Kendall Jones. “Studies have shown that places free from intense levels of human activity have really high levels of biodiversity and high genetic diversity [but] we didn't have an idea of where across the globe these intact places could still be found,” the Wildlife Conservation Society researcher told BBC News.

Jones and other scientists set out to analyse the impact of 15 different human activities or “stressors” on global ocean environments, in order to map these regions. Areas that experienced the least impact – the bottom 10% – were classed as wilderness.

Data from satellites, ship tracking and pollution reports from individual countries were analysed.

Read the full story at the BBC to see which areas remain relatively unscarred, and what can be done to preserve them.