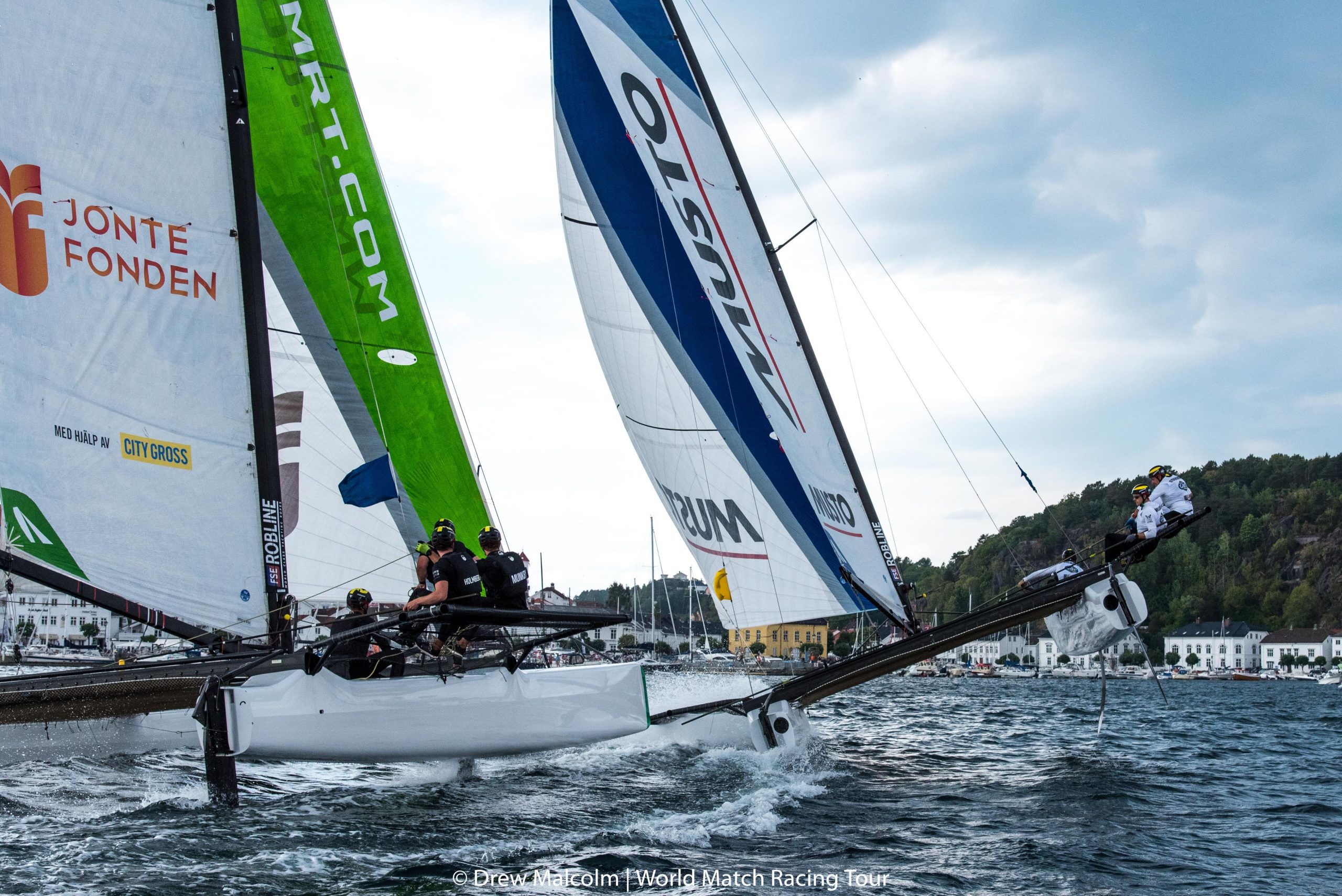 Risør, Norway: In a long and drama-filled day of M32 catamaran competition, the Quarter Finals were completed at Match Race Norway; stage two of the 2018 World Match Racing Tour.

With the north-easterly blowing diagonally across Risør fjord, and at times gusting to more than 20+ knots, the Quarter Finals ran almost to their full duration, with all but one flight reaching their full 3-2 extent.

The only pairing that looked like it might go 3-0 was between Kiwi former Match Racing world champion, Phil Robertson, and Beijing 49er gold medallist Jonas Warrer.

Robertson and his China One Ningbo team dominated, winning all but one start. In that they were behind, but had caught up and dialled down their opponent, when there was a loud bang as one of their bowsprit struts detached. “That was a bit disappointing,” said Robertson. “Otherwise we didn’t leave them much to get back in the game.”

Robertson said it had been challenging keeping control of the boat as bomb-like gusts of wind descended down the race course. “Under full main, if you got caught at the wrong angle at the wrong time when the puff hit, it was a little nasty, especially getting round the corners. We had a few scary moments around the track, but it was good fun; exciting.”

Two big names fell today. Yann Guichard Spindrift Racing skipper and recent winner of Match Cup Sweden had valiantly fought back from 0-2 down to level the score with present Match Racing World Champion Australian Torvar Mirsky. In the decider the French team won the start and comfortably led for the entire race until Mirsky came into the final mark with pressure and snuck ahead to claim the decisive point and Semi Final berth.

However, the superior starting of the young Swede and his crew (including another second generation match racer, Sam Gilmour), prevailed and being fastest out of the blocks in the last race enabled the young team to send the British match racing veterans packing.

Of the result an exhausted Holmberg said he was delighted: “We have beaten him in single races, but not in a match like this. It feels good!” But not only that: “We have never been in the Semi Final before. It is the step we’ve been trying to get to.”

Holmberg continued: “We have been doing a lot of pre-start training, so we felt more comfortable and calm. In the couple we lost we gave it away by sailing the wrong way, but it was also really shifty, so the tactics were hard as was boat handling.”

The most exciting Quarter Final dust-up was between Nicklas Dackhammar’s ESSIQ Racing crew and the aggressive young Down Under Racing Aussies led by Harry Price. Both seemed to thrive on close contact, overlapped rounding the first reaching mark and tacking well short of laylines – generally maneuvering their M32s like monohulls.

“At every event it seems that we’re the ones doing a million tacks upwind – tack when you knock and hope for the best! But there are conditions for it,” Price admitted. “We are improving at every event. We sailed pretty well all week and we are looking forward to China at the end of the year.”

The deciding match had a particularly dramatic conclusion as Price was forced to try and give room to Dackhammar around the final mark just metres from the finish line. While he crossed ahead, he did so with a penalty causing him to lose the race as well as his berth in tomorrow’s Semi Final.

Earlier in the day Norwegian hero Petter Morland Pedersen had been dispatched by Price in the Repechage stage. For Norway’s London 2012 Olympic Star crew, this was his first time skippering an M32, with a crew he had not previously sailed with until this week. “I have really enjoyed it – it is so much fun. We did 25 knots today,” enthused Morland Pedersen.

However, Pedersen acknowledged that the nimble M32 catamaran is very unlike the former Olympic keelboat and he and his team were short on experience.

“In the first stage we had some really good races, but it is hard to keep up with those guys in manouvres – we lose a little bit every time,” said Morland Pedersen, who is also part of the Norwegian syndicate hoping to challenge for the next America’s Cup.

The Semi Finals and Finals for Match Cup Norway are scheduled to start at 1000 tomorrow with a forecast 12-14 knots from the south.