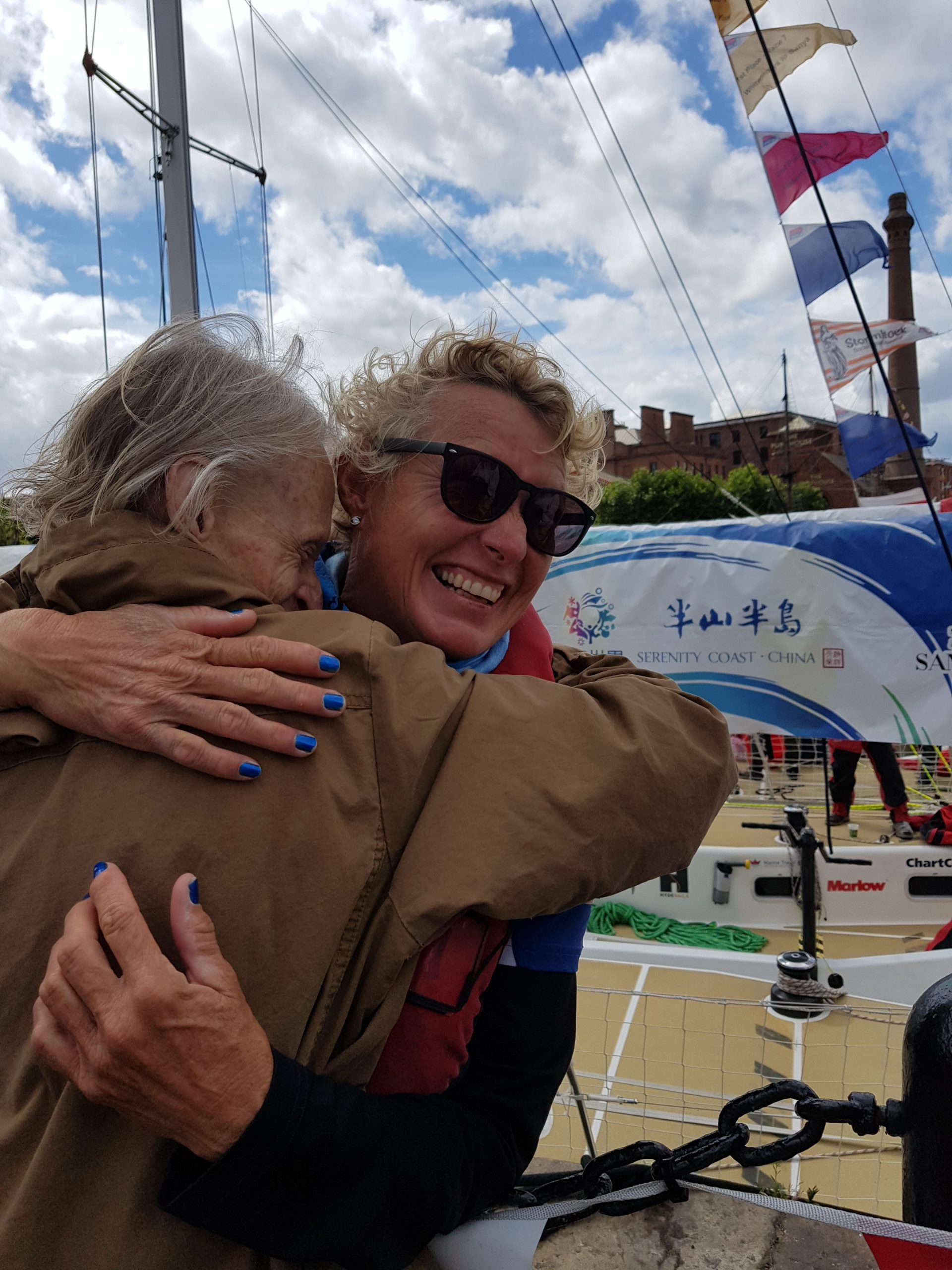 The Beatles may be Liverpool’s biggest claim to fame, but at 2.40pm local time in Liverpool (9.50pm in Sydney tonight) Sydney’s Wendy Tuck received a hero’s welcome when she stepped ashore, the first female to ever win the Clipper Round the World Race.

“It’s awesome – a bit overwhelming – I’m still coming to terms with it – I think it’s starting to sink in,” Tuck told me within minutes of disembarking Sanya Serenity Coast, the yacht she skippered to victory with a novice crew.

Tuck, who goes by the nickname ‘Wendo’, paid homage to her fellow female skipper, Nikki Henderson, who skippered Visit Seattle to second overall. The two were the only female skippers from the 12 boats that set sail around the world nearly 12 months ago.

“Nikki only turned 25 a couple of days ago – she’s incredible – so mature, the 53 year old said after the two raced for the top spot right to the Liverpool finish line. “Either she was on our heels or we were hot on hers the whole way.”

“I think our result (hers and Henderson’s) is great for the sport and for women. I feel proud of what my crew achieved,” Tuck said from the holding dock, awaiting official duties.

Tuck is a veteran of 11 Sydney Hobarts, two courtesy of the Clipper Race. She did her first Clipper Race in 2015 as skipper of Da Nang Viet Nam and finished the top-placed Clipper 70 in the 2015 Rolex Sydney Hobart.

In 2017, Sanya Serenity Coast was first Clipper boat into Sydney and first to arrive in Hobart, but HotelPlanner.com was given redress for an incident early in the race, making her time faster than Tuck’s boat.

“This tops it all,” said Tuck, who enjoyed an emotional reunion with her mum, Joan, and her brother Ray.

“I couldn’t be prouder – you have no idea,” Joan said. “I just had a cuddle with Wendy – and her brother is just giving her a big hug now. I haven’t seen for so long, but she looks very well. There’s been a few tears,” she said from the dock where the noise from the crowd was growing.

Among the 100,000 well-wishers were fellow CYCA sailing friends, Colin and Denise Wilson, who planned their European holiday around Tuck’s arrival.

“There are people everywhere. When Denise and I arrived this afternoon we were it, so we found it hard to believe the expected number of 100,000, but the crowd has built quickly,” Colin said.

“There’s a few friends of Wendy’s here – both from England and Australia. It’s been quite emotional – a lot of tears shed.”

“It was fascinating watching the fleet come up to the finish – they had to tack against a strong current and couldn’t get into the pier until the tide came in. It wasn’t easy – it took a lot of concentration,” he said.

And what’s next for Tuck?

“Well, the prize giving, dinner with family and the Wilsons with some Billecart champagne – my favourite. I’ve still got commitments with the Clipper Race and then I’m going to do the China Cup (in November), probably with an all-female crew. And then I’ll come home and find a ride for the Hobart,” she said.

She won’t have a problem finding a ride, and is sure to receive another hero’s welcome back in Sydney when she finally arrives home.