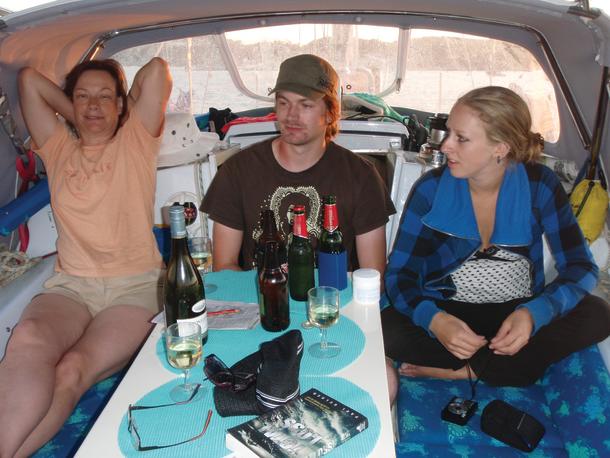 See how far down the list you get before you work out what class of boat I have.

These come in various guises: steel, aluminium, wood, deep draft, shallow draft, masthead rig, ¾ rig. Ours is cedar strip plank construction, sheathed in and out with glass and epoxy.

It has a deep draft of 1.8 metre and a lead keel of two tonne out of five tonne total displacement. The designer quotes displacement as 4.5t but I measured it at 5t with all the usual junk on board.

Ours started off as a ¾ rig but, after several seasons sailing the Western Australian coast with two reefs permanently in the mainsail, I finally plucked up courage and sawed 1.8m off the top of the mast converting it to masthead rig. The boat sailed much faster as a consequence, not least because it reduced weight aloft by 16 kilogram. Imagine sailing with your main anchor tied to the masthead? Not a great speed feature!

We bought the boat over twenty years ago, having previously owned a succession of cruising and racing yachts for much shorter periods. The boat was built in 1986 for racing with six crew; it won lots of races then was lightly cruised for seven years before we acquired her.

We had to decide whether to cruise or race her, there is no such thing as a cruiser-racer in my view. We decided to cruise.

This involved adding all manner of heavy gear to make life simple and comfortable for shorthanded sailing. After a few years we decided we would also like to do a bit of racing, so set about removing much of the extra gear we had installed; so much for my opinions!

We now have a happy compromise in a boat that is comfortable and fast, but will never beat the IRC racing boats.

One important decision we made early on was to keep the electrics minimalist. I had witnessed far too many cruisers stuck in harbours, either waiting for electrical parts and expertise, or practicing pot-holing in the cavities of their boat where the wiring is hidden.

We charge with 120W of solar panels hidden away on the top of the sprayhood and a standard 50 amp alternator on the engine. No battery monitoring system; we do not need it because the batteries are always well topped up.

We used to be able to check this using the expanded-scale analogue voltmeter. However, a year ago we swapped the two house AGM batteries for one lithium, which does not drop voltage until it is almost empty. Incidentally, the changeover to lithium was a no-brainer; just an extra voltage controller added to existing regulators, one third the weight for same available capacity, price roughly the same, safer and with a life probably outlasting mine. Why on earth wouldn’t you change?

What is the best bit of kit we have installed on the boat? I would say it is a photo-finish between:

The worst bits of kit:

So far I have not mentioned the engine, after all it is meant to be a sailing boat and it sails beautifully. Oh, alright then, it’s a Volvo three cylinder 28 horsepower with two blade folding prop. All as old as the boat and still going strong. We get six knots in calm water at 2,000 revolutions per minute. It is a bit rattly because of the two-blader but we have no other gripes. We only really use the engine to get in and out of harbour, averaging just 50 litres of fuel a year.

We keep looking around for a better, newer boat but cannot find anything for less than half a million dollars; so I think we will be sailing Panache II until we win Lotto. Oh, you have to buy a ticket? There goes another dream! ≈