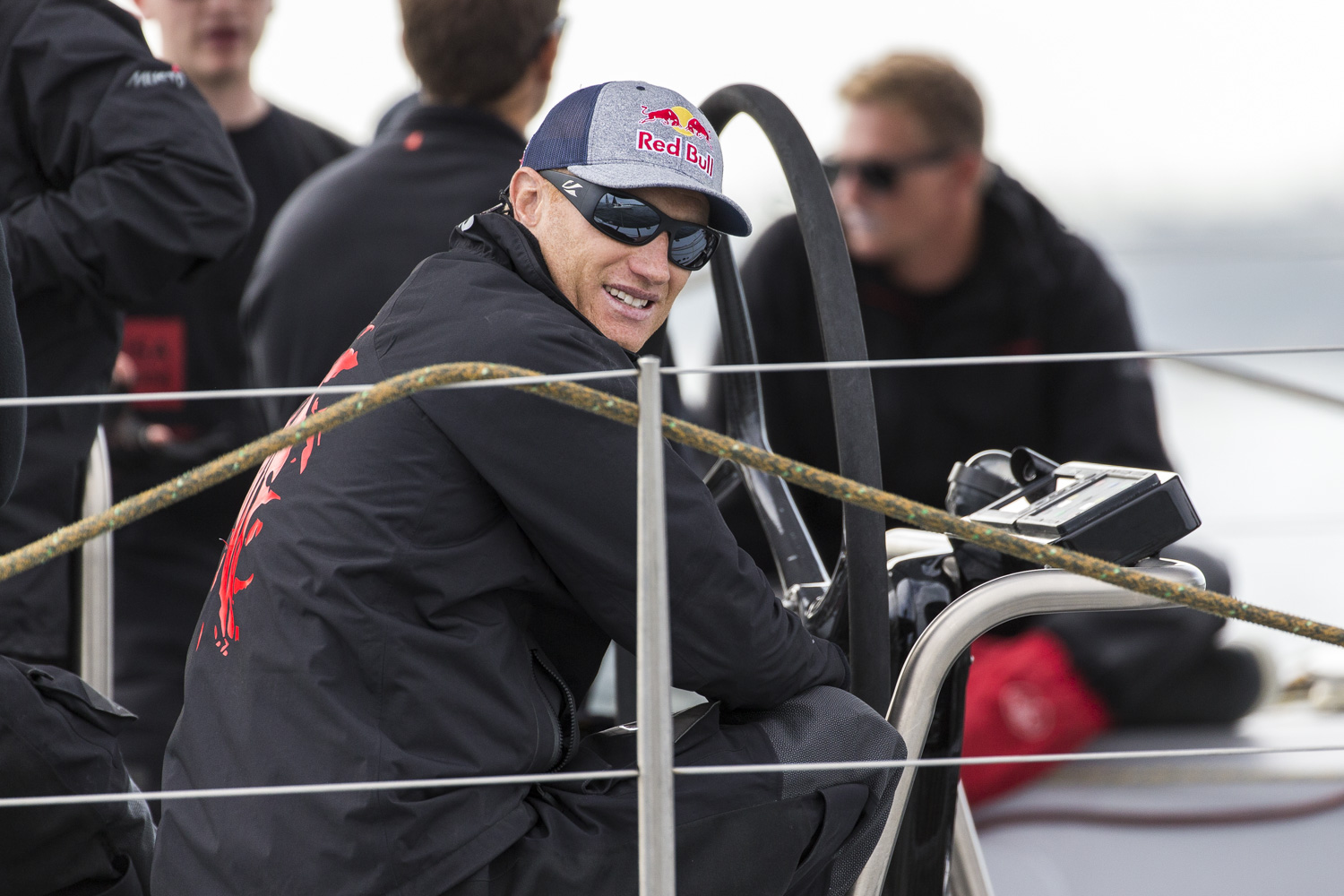 Jimmy Spithill on Comanche during the pre-start of the Gold Coast Race. Photo Andrea Francolini.

Day two of the Noakes Sydney Gold Coast Yacht Race has Jim Cooney’s 100ft Comanche eating up the miles and holding a 10 nautical mile buffer to the nearest challenger, the Oatley family’s Wild Oats XI. Comanche’s ETA at the finish line off Main Beach is between 3am and 9am Monday morning, July 30, 2018.

At 1420hrs Cooney advised: “We are very happy with Comanche’s performance, especially in the light winds at the start which is an area we have been working on. We are now sailing a little faster than Oats and we think we can hold this lead. The forecast suggests a swing to the NW around 1700hrs which will hopefully take us to the finish. We opened up a lead on the others between 0300 and 0600 this morning. We were simply working the shifts and stayed on a favourable port tack out. There was the risk of increasing southerly current as we went east, but the angle advantage was worth it.

“There are whales aplenty, mostly at a distance but as I write this we had a breach only 150m astern,” Cooney advised.

It is Comanche’s first attempt on the 33rd season-opening coastal race north to the Gold Coast. Cooney’s hull-shape is well-matched to the conditions and the team ripe for a line honours triumph, one of the boxes to tick on the way to this year’s preeminent Rolex Sydney Hobart Yacht Race.

The battle for second is fierce. Black Jack, InfoTrack and Wild Oats XI have all had a turn at second since the 1.50pm start on Saturday and now Wild Oats’ is chasing down Comanche as the frontrunners continue to maximise northerly winds ahead of a forecast change.

The RP63 Voodoo updated their social media followers at 1330pm: “A nice start and out of the heads. Between 10 – 20 knots all night on the nose. Special mention to someone who shall remain nameless @couttsylives for leaving our only pot on the dock. Cold stew is the best!”

Two retirements came in the early hours of Sunday morning, Neville Blair’s Beneteau 47.7 Sports Bar due to mainsail damage and the overall winner of the PONANT Sydney Noumea Yacht Race, Seb Bohm’s Smuggler, skippered by Sam Price in the owner’s absence, out of the race with engine problems. At 1256hrs Ian Creak’s Ausreo crew advised they had hull damage and would make for Port Stephens, the third retirement.

The Macquarie coast forecast for the remainder of Sunday is northerly winds 15-25 knots turning westerly 20-25 knots in the evening and winds reaching up to 30 knots offshore south of Crowdy Head in the late evening.

The Cruising Yacht Club of Australia’s finish partner, Southport Yacht Club, can expect a huge night of arrivals Monday night and throughout Tuesday.

The 51-boat fleet can be tracked via the Noakes Sydney Gold Coast Yacht Race website.