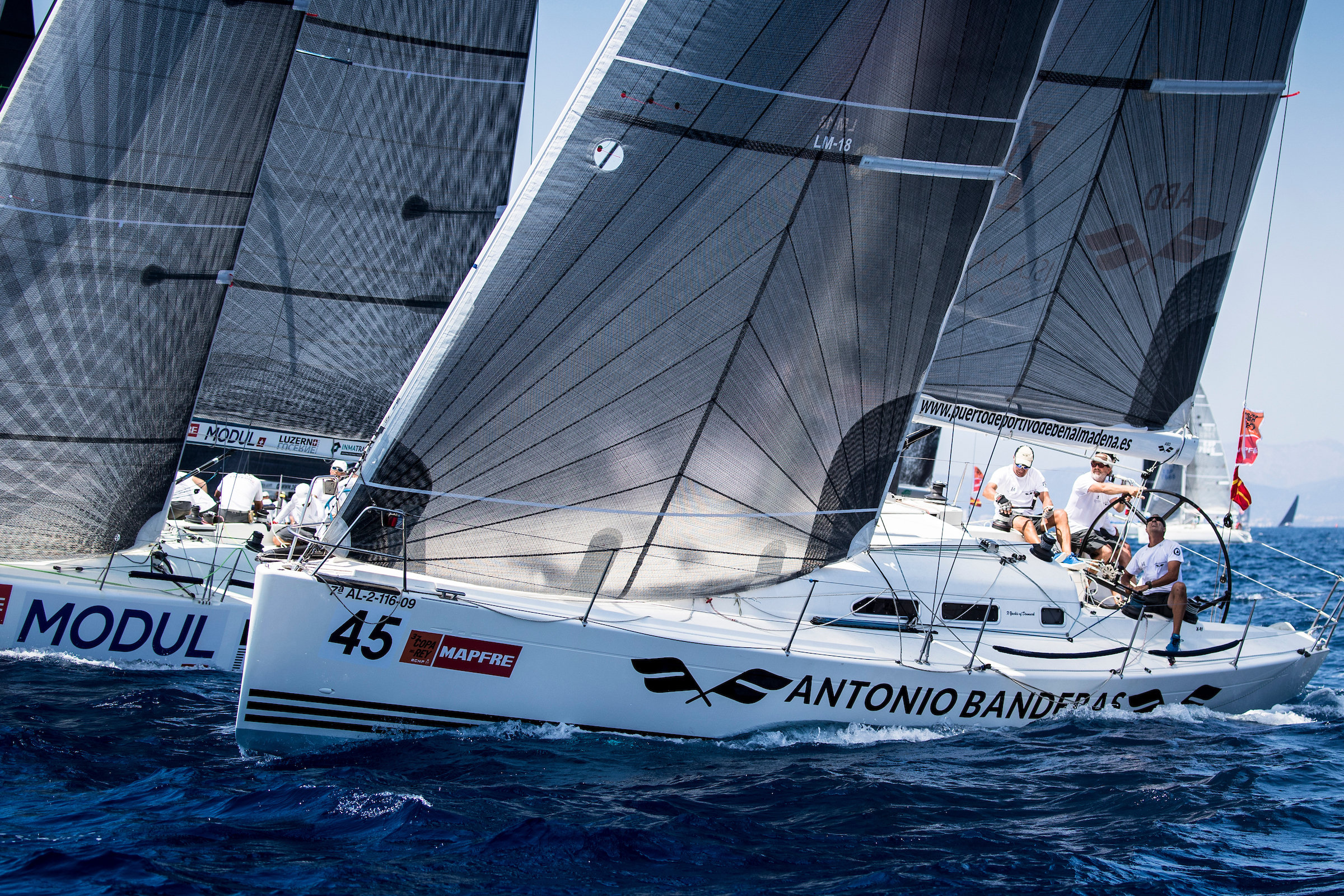 The traditional coastal race at 37 Copa del Rey MAPFRE is a break from the usual diet of windward-leeward races. In today’s light sea breeze conditions and sweltering summer temperatures it may have felt longer than the actual miles sailed – especially for the smaller boats – but the headlands and consequent transition zones made for an interesting challenge. Even so, starting and the first windward legs were key to success in Mallorca Sotheby’s IRC 0 and 1 where Momo and Beau Geste both triumphed.

The Mallorca Sotheby’s IRC Classes and the BMW ORC 2 and 3 were set courses out to the east of Cabo Blanco where the breeze was actually lighter. In fact as the record sized fleet today reached its full magnitude as the Melges 40 fleet and the GC32 flying catamarans started their regatta, it was the classes racing in the Bay which had the best winds, as the thermal seabreeze accelerates into and across the bay, wrapping round the cape to the east.

Dieter Schoen’s Vrolijk designed Maxi72 Momo may have faltered at the start, letting both Cannonball and Proteus away on the 2.5 miles first beat, but Momo found a vein of pressure and shift to their right and were able to lead around the first mark by a couple of boat lengths. With their win today Momo are now three points clear as the regatta reaches its midpoint today, Cannonball in second.
Tactician on Momo Markus Wieser noted, “At the first upwind mark we were only two or three boat lengths ahead but from there we could just stretch. When you are ahead you are always in clear air and so you can stretch. So far, so good.”

Momo were able to recover from their poor start but that was not entirely the case in the Melges 40 class for the PalmaVela winners and Grand Prix circuit leaders Inga from Sweden. A pair of uncharacteristic starting errors set them on the back foot on Day 1. Richard Goransson’s team hit the start mark and had to take a penalty in the first race and then were over the start line on the second. The Japanese flagged Sikon, which has local ace Manu Weiller calling tactics, leads after a 5, 1, 1 today. He reported: “ It was not an easy course area due to the fact that there was not a best option on the right or on the left and you had to work on the different shift and pressure all the time. In Race 2 and 3 we had a nice balance and a clean performance. It's just the beginning and it will be not easy to defend the position in the next day due to the fact that all the Melges 40 teams are so closely matched terms of speed and performance.”

An early lead worked out for Team Beau Geste which won Mallorca Sotheby’s IRC 1 class handsomely to lead the highly competitive fleet by six points now. But tactician Gavin Brady cautions, “It is always interesting when the discard comes into play after eight races, that can be quite a game changer.”
But Karl Kwok’s Beau Geste crew relished the challenge today, Brady adding, “It was a really fun, dynamic course, so there are little passing lanes in under the cliffs. You want to sail the shortest distance but then there is more wind offshore, there is a lot changing. It is fun to do the coastal race in the middle of all this windward-leeward stuff.”

In the Soling’s Olympic heyday Schümann won gold in 1988 with Bank in bronze. In 1992 in Barcelona Bank took gold, knocking out Schümann in the match race semi finals, leaving the German crew to fourth. In 1996 when Stig Westergaard’s crew represented Denmark Schümann won gold and in 2000 it was Bank gold Schümann silver. The pair have been firm friends and sailed together with United Team Germany. But the ClubSwan 50 brings the friendly rivalry back into a strict one design arena for the first time. Last year Brandis’ Earlybird dominated when the class made its debut and but right now it is Bank, with Sonke Meier’s NiRaMo which has the upper hand, leading by five points over Earlybird. Bank is loving the tight one design racing,
“We made a decision to race in a one design class and we certainly got that. It is extremely tight, extremely tight racing. You can be anywhere between first and seventh.”
“We finished within a second of Earlybird again today and so now we have had three races in which we have finished a second ahead of Earlybird. It is very exciting.

“I had forgotten how close one design can be. On the second upwind in the second race I was like ‘can we get this over with, it is all too tight for me!’.

On the rivalry with Jochen Schümann, Bank grins widely, “ It has always been there, in the Soling and and in Match Racing but last year they (Earlybird) beat the stuffing out of us and it took a bit of getting used to have them beat us. But now we are relieved to be competitive. We are good friends now. And I trust him, when I ask him advice he gives it freely and openly, good solid advice. We go back a long time and I think I can say for both of us that we have a lot of respect for each other. But as always, you like to beat those who you are close with.”

In the 6 Metre classes, Bribon leads as the only boat in the regatta to have won all four races, tactician Ross Macdonald noting, “It was a perfect day for sailing. Generally the left was good today and we got there more often than our rivals. Once you got ahead on the first beat there were not too many passing lanes. I have sailed this boat for ten years – with the two previous owners before ‘senor’ got a hold of it. It is fantastic to be here with the class. I never thought I would see the class here and hopefully the resurgence will continue.”

And there is some more racing tomorrow.