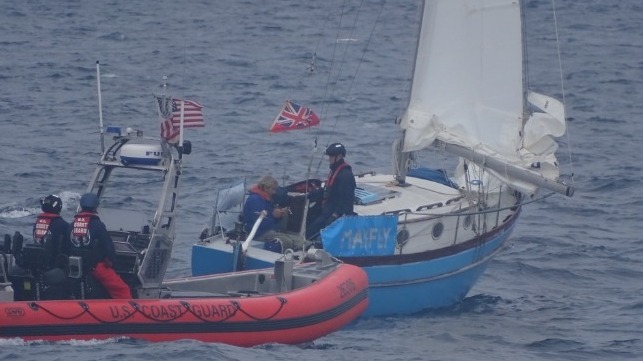 A boat crew from the Robert Ward boards the Mayfly

The U.S. Coast Guard and two AMVER vessels helped a 78-year-old man aboard a homemade sailing vessel at multiple points during a five-month journey across the Pacific Ocean.

On October 29, the brother of the mariner notified Coast Guard District 11 command center that he had departed Japan at the end of May and was expected to arrive in San Francisco in late August. Due to a lack of wind, the man aboard the sailing vessel, the Mayfly, was delayed by two months and was running low on food and water.

District 11 asked for assistance from a nearby Automated Mutual-Assistance Vessel Rescue System (AMVER) vessel, the Wallenius Wilhelmsen ro/ro Tamesis, to provide rations to the Mayfly. The Tamesis arrived on scene and delivered the rations with no request for additional assistance.

On November 4, district watchstanders received another request for food and water from the mariner, who was also experiencing heavy weather at a position about 250 nautical miles west of Los Angeles. A nearby AMVER vessel, the Umberty, diverted and transferred additional rations.

On Wednesday, district watchstanders notified Coast Guard Sector Los Angeles-Long Beach that the mariner was about 85 nautical miles southwest of Point Vicente, low on supplies again, and requesting assistance with towing the sailboat. The Coast Guard Cutter Robert Ward diverted from its patrol to tow the homemade vessel towards Oxnard.

“If this mariner didn’t have a float plan and reliable communications ashore, the outcome of this case could have ended up drastically different,” said Cmdr. Justin Noggle, the Sector Los Angeles-Long Beach chief of response. “We are relieved that we were able to provide the much-needed assistance to bring him and his vessel back to shore safely.”