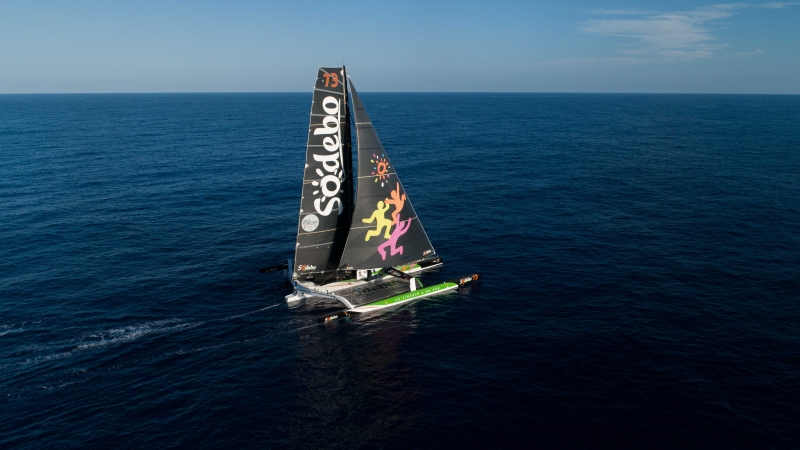 Maxi Edmond de Rothschild continues to lead on the Brest Atlantiques race, passing Gough Island at 12.45 am and is now progressing with a series of gybes between the high pressure system and the Ice Exclusion Zone. MACIF just behind continues to chase while Sodebo Ultim 3 is slowed down due to the breakage of her starboard rudder giving Actual Leader a chance to make up ground.

Despite leading since the race reshuffle in Rio, Maxi Edmond de Rothschild, which clocked up some high speeds between Sunday and Monday morning, has been slowed down as it races in the lower latitudes of the forties. This is due to a high that is positioned quite far south and giving fairly light wind (10-15 knots) from the west. Whilst the leaders would like to head further south to get the stronger winds, there is an ice exclusion zone they must avoid, limiting the room for manoeuvre and options.

This allows MACIF, who passed the longitude of Gough Island Monday at 0730am a chance to make up a few miles in the coming hours, however François Gabart and Gwénolé Gahinet should in turn, be slowed down by this area of high pressure. Behind, Sodebo Ultim 3 has been compromised following a collision at 11:30 pm last night with an unidentified floating object, which caused the starboard rudder to break. While Thomas Coville and Jean-Luc Nélias are logically losing ground compared to their competitors, they are still however, able to maintain speeds of 20-25 knots, proving that the sea conditions have improved considerably since last night, allowing the boat, despite being weakened, to remain quite manoeuvrable.

Sodebo Ultim 3 is expected to reach the longitude of Gough Island around 6-7pm, closely followed by Actual Leader (Yves Le Blevec/Alex Pella). The two boats were just 30 miles apart on the 3pm report and should both then benefit as the high weather system gradually moves north giving them a more direct route in stronger wind to Cape Town.

Cape Town will be the second and last point of passage as a mark on the Brest Atlantiques, which, according to the latest routing, Maxi Edmond de Rothschild is expected to pass on Wednesday evening.

What is the “Ice Exclusion Zone”? Jacques Caraës describes it as: “A dangerous area in which trimarans must not enter and which there is the danger of encountering “growlers” – large chunks of ice that have broken off icebergs. In water of about 10-12 degrees, it quickly splits into a multitude of growlers. We have identified some in the western part of Gough Island, where the first boats left to starboard on Monday. This pushed us to raise the “Ice Exclusion Zone” by a few degrees to 37°60 on the western part of Gough Island. After Gough Island, this limit drops to 43° South because there are no further risks.”