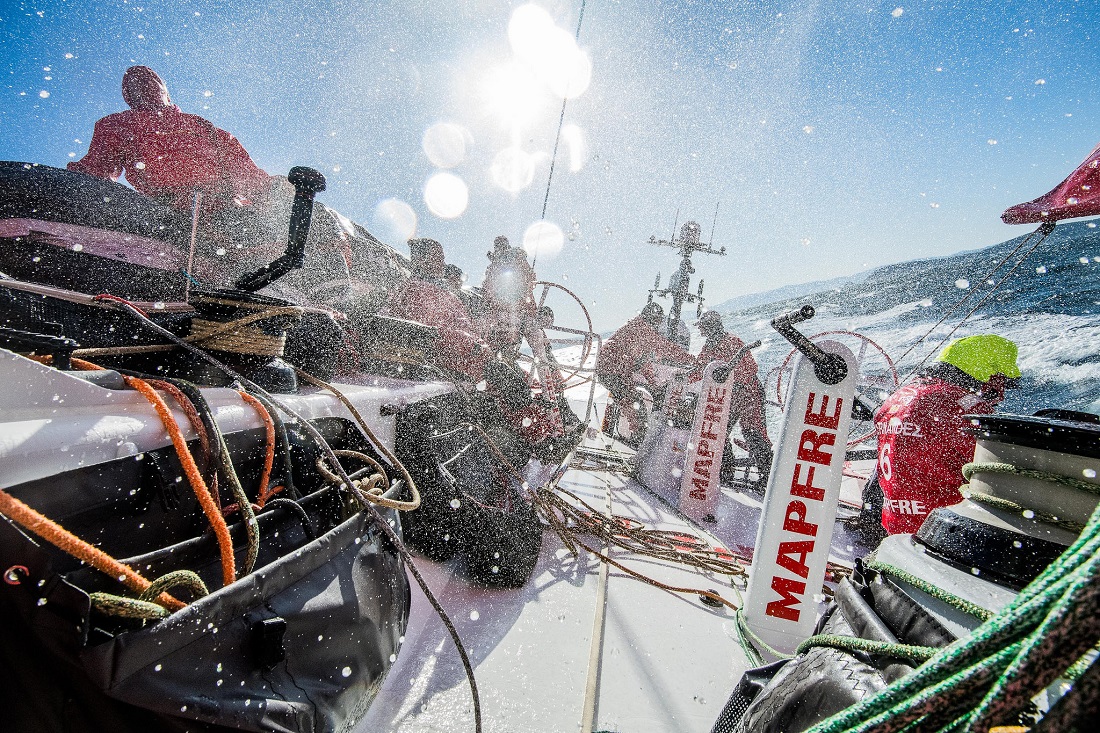 Sanxenxo, Spain – For Rob Greenhalgh, a true veteran of the race, with four round-the-world races under his belt, it was a dream since he was a small child.

He describes the race as, “the toughest and most epic adventure that exists, and the one that everyone wants to win,” and realises that it is increasingly “more competitive, and so much more difficult to win”.

However, he has already done so, and it was on his first participation in the race, in 2005-06 on board ABN AMRO ONE, alongside skipper Mike Sanderson from New Zealand.

Willy Altadill is the youngest of them all. Aged 24, he has been in contact with the Volvo Ocean Race since he was very young, “because my father was already involved.”

He is referring of course, to Catalan round-the-world sailor, Guillermo Altadill.

An offshore sailing gene already in his veins, and having sailed big boats from an early age, it wasn’t difficult for Willy to make his début in the Volvo Ocean Race at just 21. On board MAPFRE with Chinese sailor “Black”, the youngest crew member of the 88 who took part in the 2014-15 edition.

Yet for Willy it isn't of great importance: “One day I had the chance to take part in the Volvo and so I did,” he says.

Yet he had discovered the race much earlier: “More than what I had been told about the race was what I had read about it. I had seen books which explained pretty much what it was like…”

The attraction had begun.

Ñeti Cuervas-Mons took part in his first Volvo Ocean Race in 2008-09 as an Under-30 crew member. When asked about how the Volvo Ocean Race first grabbed his attention, as is typical for those born in Cantabria, Santander makes an appearance in the conversation.

“I first really noticed it with Galicia 93 Pescanova, when a friend of mine from Santander, Toño Piris, took part in the round-the-world race. For us, he was the star of the city, because he was one of our friends, a sailor from our city, Santander, who was going to race around the world. And for all the young kids who sailed at the club he was a real role model”.

During those years, many winters and summers at the sailing club in Puntal, Ñeti could never have imagined participating, not once, but in four round-the-world races. Moreover, that the fourth race would be alongside Toño Piris, the head of MAPFRE’s shore crew.

If anyone knows the Volvo Ocean Race, it is Neal McDonald, our performance director.

“Sailing with icebergs, Cape Horn… It was all the stories describing it and the images they brought to mind when I was a child that made me dream of taking part. More than anything, it made me really curious about it.”

This is his eighth Volvo Ocean Race with an on-shore position, but there is a possibility of sailing one of the legs.

And Neal never tires of it, as he explains, “When you look at the map, you see all the places you have been. It is difficult to describe to people just how wonderful it is to have achieved something like that.”

“It is a truly incredibly experience. You really have to have done it, and to have been there to know just how exciting it is to be a part of it.”