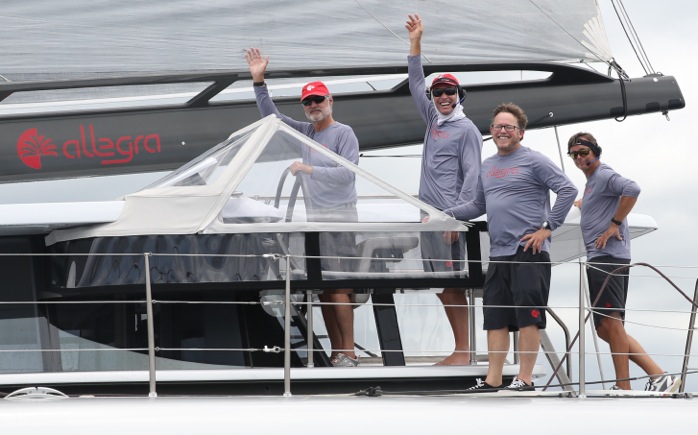 The fleet enjoyed the first day and night of the Antigua Bermuda Race when a light easterly breeze of about 8 knots and a gentle sea state provided glorious reaching conditions.

By morning on the second day, all of the fleet had passed Barbuda – the next land they will see will be Bermuda, over 800 miles north. The wind experienced was more than forecast and this may allow the faster yachts to hook into good pressure further north.

The slower yachts might miss the lift in pressure as it goes east away from the race track. The phrase 'rich get richer' would be an apt comment for the leading boats in the Antigua Bermuda Race. However to reach the rich pickings to the north, the fleet need to cross an area of little wind.

At 0900 ADT on Day Two, the Nigel Irens-designed catamaran, Allegra, of the St. Moritz Sailing Club was 800 miles from Bermuda.

“The view from the nav. office right here, right now is pretty damned nice! The Caribbean sun is closing fast on the horizon to my left and setting over the very low shores of the island of Barbuda,” Watch Captain Paul Larsen said in his blog from on board Allegra just before sundown on Day 1.

“There is a slight swell, but it's comfortable. Scotty is doing some last checks around the deck before darkness sets in. Behind me, Rick is preparing a steak dinner. Everything is golden on board Allegra! We are making about 8.5 knots across this painting and we're grateful for every one of them.” the world speed sailing record holder said.

“The fact is that we've had more wind than we expected since the start, having thought it would be a very light weather affair.

“Seeing as some of the crew have appointments set in stone, that can't be missed – family wedding, weirdly not planned around a sailing race – the decision was made to fill Allegra with fuel after the last weather forecast before the start. The weight equivalent of two Harley-Davidsons was parked/loaded into the tanks.

“The wind we have now is not as forecast and we only have to do these speeds for a couple of days to be out of trouble time-wise. Then the pressure is off… and the longer showers and even a little air conditioning action is all back on.

“Typically people like to see hardened sailors suffering and battling away for every rugged mile. Thankfully, not all sailing is like that, and certainly not what this boat is about. No, from where I'm sitting now it's not about that at all… although, wait. Damn, a low cloud on the horizon, so no green flash. Can't have it all eh?

“We're already well ahead of the predicted routing, but of course it's early days and this can change. It will be interesting to see how Stay Calm fairs going to the west of Barbuda. Nav. lights are going on and dinner is about to be served. A very full moon should be rising shortly. What a great way to get to Bermuda. So far, so good.”

This is the first offshore race for the US Merchant Marine Academy's Volvo 70, donated by the Murray Family to promote Warrior Sailing, a program to assist wounded veterans in their recovery through the sport of sailing.

The two smallest boats in the Antigua Bermuda Race are enjoying a close battle on the water. Swedish yacht, Talanta, skippered by Mikael Ryking, has managed to just stay ahead of the Canadian Pogo 12.50, Hermes. However, after time correction Hermes is winning the duel.

“Our first sunset on the Antigua Bermuda Race. It was slow going at the start, but now, when we do manage to get into double-digit wind speed, we are able to gain ground on the fleet quite quickly. Rounding Barbuda at nightfall and slowly, but steadily ticking off boats. Playing with the staysail to see if we can squeeze out any extra boat speed,” reports Meg Reilly from on board Canadian Ocean Racing's Pogo 12.50, Hermes.

One of the other smaller yachts in the race is Jeremi Jablonski's Hanse 43, Avanti, representing Cedar Point YC, Connecticut USA. Avanti, racing with three crew on board and is currently second after IRC time correction: “Seven knots of wind and sailing the rhumb line. We are enjoying every minute of it!” reported Avanti's, Jeremi Jablonski who has sailed her to the Caribbean for the last five seasons from her home port.

Three yachts have declared using their engine for propulsion and have retired from IRC, but are still racing under the CSA Rating Rule with a penalty to come: Les Crane's Farr PH 56, Monterey, Schooner Eleonora and John Marshall's Oyster 65, Rock Oyster.

Keep up with the race and all the news via the official website where blogs from the fleet, photos and a start video will be uploaded: https://www.antiguabermuda.com/