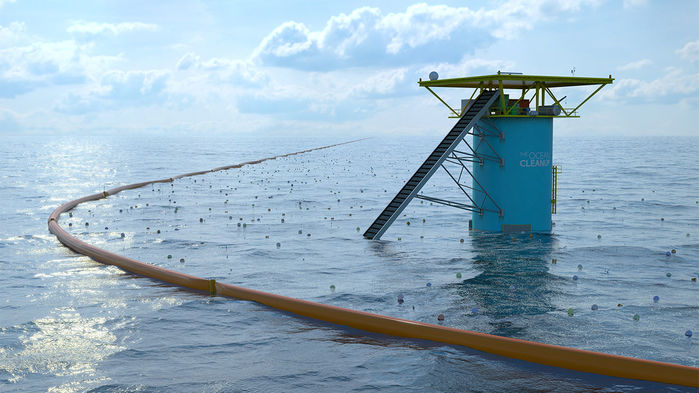 It is undeniably an ambitious vision. Boyan Slat, a charismatic 22-year-old drop-out inventor, plans to clean up plastic trash circulating in the North Pacific Gyre by launching a fleet of floating trash collectors. Ocean currents would propel floating plastic trash into curved floating booms, which would funnel trash toward a central tank, to be collected monthly by ships. “We let the plastic come to us,” he says. The group hopes to eventually finance the operation by recycling the plastic and selling it as a branded product or raw material. Slat already has a pair of sunglasses made from recycled Pacific plastic.

Skeptics say the idea doesn’t make much sense and that collecting trash closer to shore would be more cost effective. “Focusing clean-up at those gyres, in the opinion of most of the scientific community, is a waste of effort,” says marine biologist Jan van Franeker of Wageningen Marine Research in the Netherlands. “It’s a lot of money to reduce something that disappears in 10 to 20 years, if you stop the input.” His research on seabirds showed a 75% decline of ingested plastic over 2 decades after reductions in industrial plastic entering the North Sea. Critics also worry that the high-tech clean-up project could distract from less glamorous efforts to lessen the use of plastic.

Slat’s 4-year-old organization, The Ocean Cleanup, based in Delft, the Netherlands, is well on its way to launching its first unit. At an event tonight in the Werkspoorkathedraal—an industrial meeting hall in Utrecht, the Netherlands—Slat unveiled a new design that he says will allow The Ocean Cleanup to deploy its first collector in 2018, 2 years earlier than planned. It will also collect trash at twice the rate of earlier designs, he predicts.

Read the full story, including the arguments on both sides, at Science magazine.