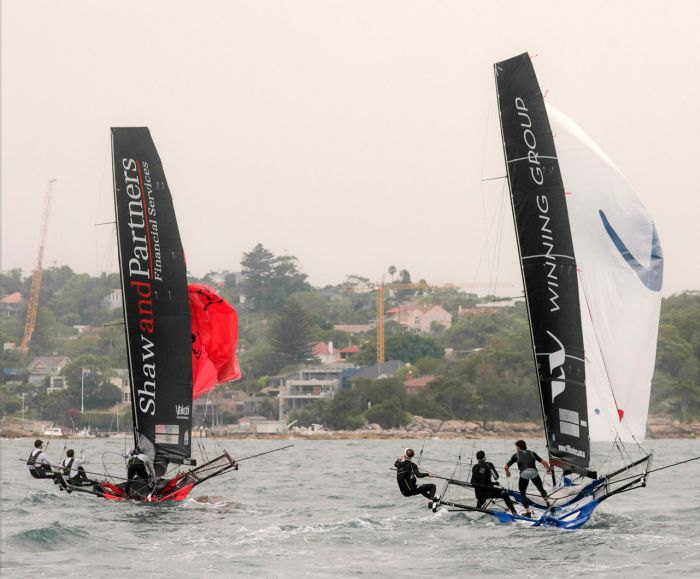 Shaw and Partners Financial Services and Winning Group crews battle to get their spinnakers set after rounding the windward mark. Photo Michael Chittenden.

The Smeg crew of Micah Lane, Ricky Bridge and Peter Mackie sailed beautifully in the 12-16 knot NE wind to take out Race 4 of the NSW Championship, but it was the second-placed Winning Group which has wrapped up the championship with still one more race to be sailed after the fleet resumes racing on January 12.

Despite each team being allowed a discard of the worst performance, Winning Group has a score now of only five points from the four races, and no other team can get a better score from the final race. After each team discards the worst result to date, the table shows Winning Group on net 3 points, followed by Shaw and Partners Financial Services on 9, The Oak Double Bay-4 Pines on 10, Smeg on 12, Appliancesonline.com.au (Brett Van Munster) on 12 and Tech2 on 17.

The Oak took the lead shortly after the start in today's race, but a battle soon developed between Smeg, Shaw and Partners and Tech2 as the race settled down on the windward leg to the Beashel Buoy. Smeg held a 10s lead from the defending champion Shaw and Partners team, while Tech2 was a further 15s back, followed by Winning Group and The Oak.

The three leaders continued their battle on the spinnaker run to the wing mark off the southern end of Shark Island, then the run between Shark Island and the bottom mark off Clark Island.

Tech2 showed good downwind speed to move ahead of Shaw and Partners and was only 3s behind Smeg as the fleet turned for the second windward beat up to the Beashel Buoy. Winning Group was still fourth, 35s from the leader.

Smeg was outstanding on the long work from Clark Island to the Beashel Buoy and pulled out a 1m lead over Tech2, which was still 20s ahead of Shaw and Partners and Winning Group.

From that point, Smeg was never really challenged for the lead but the battle amongst the challengers was intense as Winning Group continued her charge through the fleet. Over the final lap of the course, Winning Group reduced Smeg's lead to 35s at the final windward mark then challenged strongly on the final spinnaker run between the islands to get to just 7s behind the winner, Smeg.

The Australian 18 Footer League's racing will now go into recess for the Christmas-New Year period. Racing will resume on Sunday, 12 January when the club will stage Race 5 (final) of the NSW Championship.

Spectators can see all the teams while they are rigging, then follow the racing on board the club's spectator ferry, which leaves Double Bay Wharf, alongside the rigging area, at 2pm. Book online through the club's website www.18footers.com.

AeroMedia Live Broadcast team will also be out on Sydney Harbour to capture all the action for those who can't make it onto the water. The livestreaming is available by going to www.18footers.com and clicking on the '18 Footers TV' link.