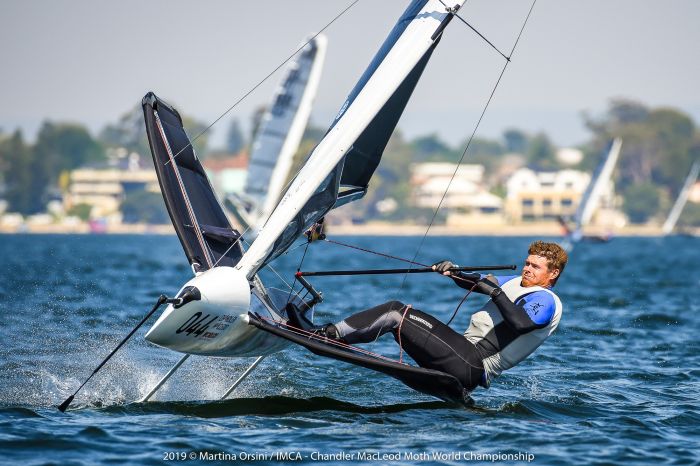 The first day of finals racing at the 2019 Chandler Macleod Moth Worlds had it all – with thrills, spills, and three pickets for the regatta leader Tom Slingsby.

With racing slightly postponed today at the scheduled start time to adjust for the sea breeze shifting into position, racing got under way soon after as sailors licked their lips at the building Fremantle Doctor, that had been missing in action earlier in the series.

‘The Doctor’ as it is more affectionately known, is the classic local Perth sea breeze that is renowned for going nuclear from the southwest in the summer, and while all signs today pointed to that, we ended up with a steady 15 to 18-knot breeze for most of the day.

Slingsby was all class from the outset in Gold Fleet, starting well in all races, hiking hard and stretching his legs from there to take three very comfortable race wins.

The Western Australian Police even stopped by the club after racing to speak to Slingsby, issuing him with an official caution for breaking the 8-knot speed limit for water craft on parts of the river.

Slingsby’s Australian SailGP team mate Kyle Langford was the next best for the day with a 2-3-2 score card, however he said Slingsby was just too good and really hard to catch.

“Awesome day of racing, I mean I’m going to have to step it up to kind of get a hold of Slingo (Tom Slingsby),” Langford said. “I don’t think he is unbeatable but he’s just quick, he’s sailing well, he’s starting well, so I think the rest of us need to step it up to match him.

“He’s obviously got confidence in his boat handling and also confidence on where he wants to be on the racecourse … I’d say that’s actually what he’s doing better than everyone else.”

Beyond the top two, it was Tom Burton sliding into third overall after a 3-8-6 score card, with a bit more distance from there on with Francesco Bruni sliding into fourth, Scott Babbage into fifth and Matthew Chew into sixth.

The second day of finals racing provides an interesting cross roads for the event, with Slingsby either stretching his legs and putting the regatta well out of reach, or his closest competitors, Langford and Burton, finding a way to give close the gap and give punters a final day of racing for the ages.

Results can be found at http://bit.ly/MothWorldsResults/