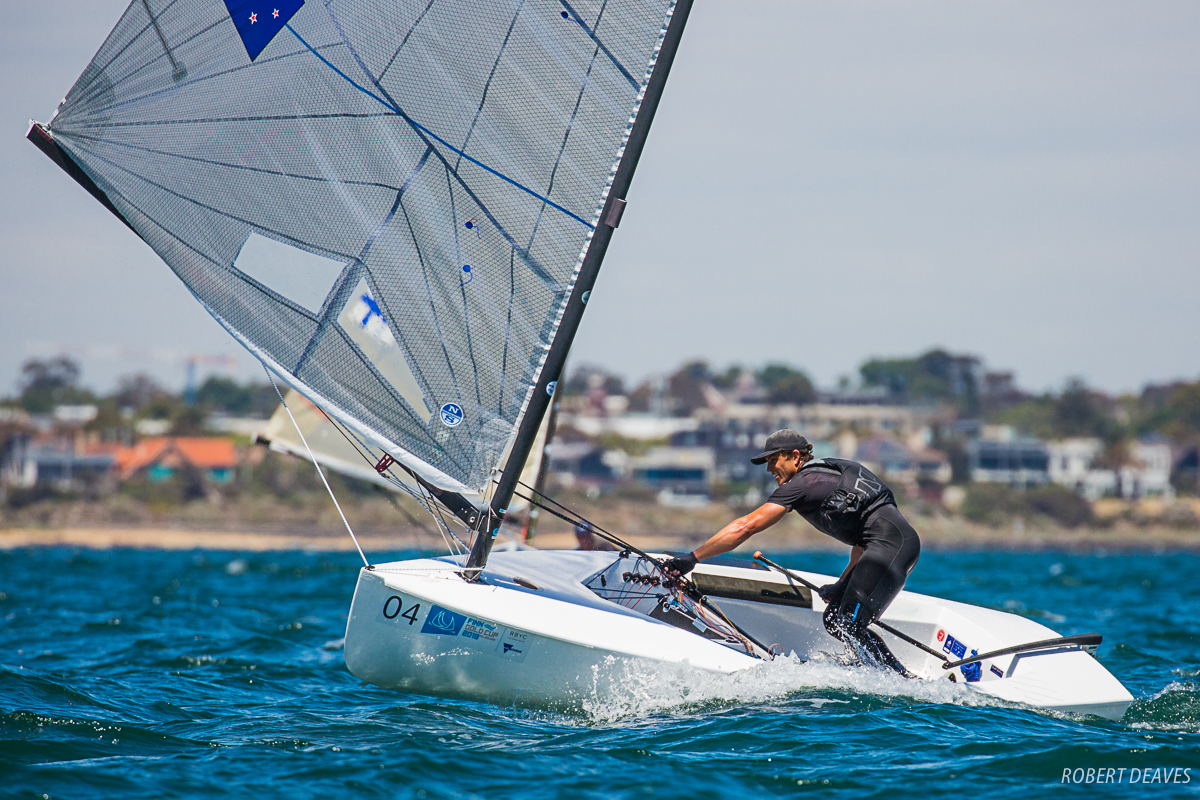 The 2019 Finn Gold Cup kicked off in style with the 60-boat fleet getting two races in on day one of the Finn class world championships in Melbourne on Monday (16-21 December 2019).

Racing got underway with an hour delay to give the breeze a chance to fill in and by 2 p.m. the first race started in a 9-12 knots southerly breeze which later settled around 10 knots.

Australian Sailing Squad’s Rio Olympian Jake Lilley (QLD) had a solid start to the penultimate world championships ahead of the Tokyo 2020 Games finishing the first day of racing as the top ranked Australian in 12th place.

“We had a tricky, light building sea breeze. We woke up with pouring rain, as it does in the morning in Melbourne, but the sea breeze filled in to about 10 knots and we got two good races away in really challenging conditions,” Lilley said about the day with the sun coming out for the start of racing.

For Lilley, the first day of racing was all about getting into the rhythm of things and with a 19th and 14th place in the high-calibre fleet, that is exactly what he did.

“We talked this morning and wanted to get into the rhythm and make sure we don’t have any blow outs. The aim was to put two keepers on the board and keep out of trouble and that’s what we did. We’ll keep moving forward and try and get a couple more inches out of it tomorrow,” Lilley said.

Fellow Australian Sailing Squad’s team mate Oliver Tweddell (VIC) was not far off and finished the day ranked 19th after a 22nd and 17th place in the two races of the day.

The day marked the return to racing for Tweddell who missed the last 12-month of competition due to a broken wrist and has only been back on the water since August.

“I’m just grateful that I’m here racing in the first place so I don’t really have any pressure or any nerves. I’m just excited to be out there and it’s great to have all the guys here to race with on home waters. I’m really looking forward to the week,” Tweddell said.

In other top-40 Australian results, Western Australian Lachlan Gilham impressed with a strong 20th place in the second race of the day to finish 26th overall, while Tasmanian Jock Calvert finished the day ranked 39th. See all results here: http://sailingresults.net/sa/results/overall.aspx?ID=80280.2

Racing continues on Tuesday with another two races scheduled and with temperatures as well as racing to heat up with eight more races scheduled ahead of Saturday’s final race and top-ten medal race.

“It sounds like we might get a bit of a heat wave later on towards the end which should be very interesting to navigate through. If it gets hot and humid it will be a good test for later on in Japan and very difficult for us when we are free pumping out there on the water so it will be hard to manage,” Oliver Tweddell said about the forecast and with most of the international fleet making the most of Australian summer to prepare for the Tokyo 2020.

Winners of the day one of the 2019 Finn Gold Cup were New Zealand’s Andy Maloney (5, 1) and Josh Junior (1, 5), who showed they are a force to be reckoned with at this world championship sitting in first and second respectively at the end of day one. Croatia’s Nenad Bugarin follows in third place after posting an eighth and second place.

While Josh Junior secured New Zealand the Tokyo 2020 quota spot at the world championships in 2018, who will represent New Zealand at the Tokyo 2020 Games is yet to be decided, with more tight racing expected between Junior and Maloney over the coming days.

Junior kicked-off the world championship with a win in the first race of the 2019 Finn Gold Cup ahead of Spain’s Alejandro Muscat and Joan Cardona Mendez. Canadian Tom Ramshaw finished the race in fourth, while Andy Maloney finished fifth.

The second race of the day got underway with a clear start on the second attempt after a general recall in the first. Andy Maloney led throughout the race taking home the win ahead of Croatia’s Bugarin in second and Nicholas Heiner, from The Netherlands, in third.