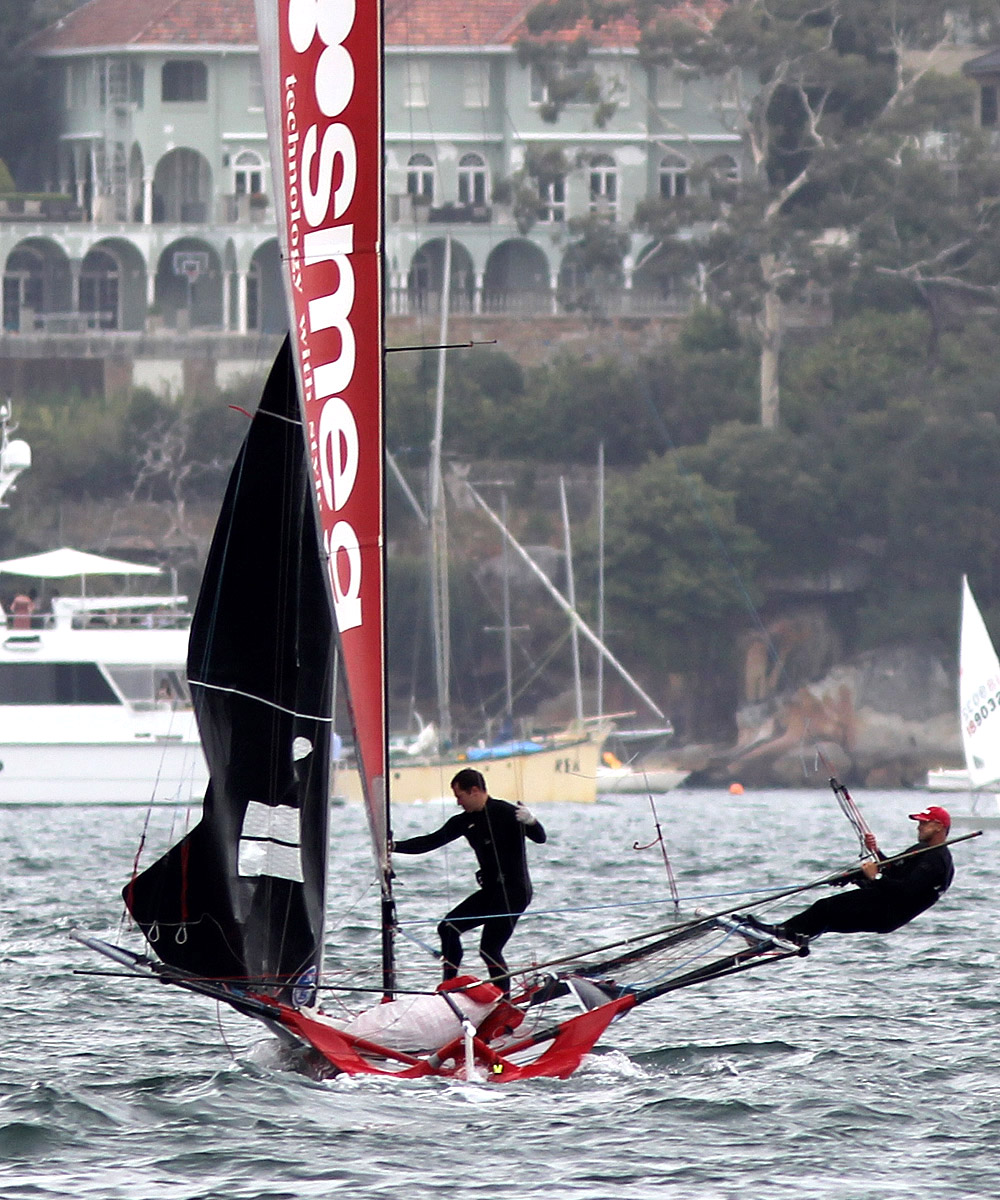 Smeg crewman about to effect an essential repair to the jib in the closing stages. Photo 18 Footers League.

The Smeg team of  Lee Knapton, Mike McKensey and Ricky Bridge are the 2016-2017 NSW 18ft Skiff champions after finishing in second place in today’s final race of the series on Sydney Harbour.

Going into the last race of the championship tied with Coopers 62-Rag & Famish Hotel (Jack Macartney), the winner was going to be the one which finished ahead of the other and for most of the race it was obvious that the Smeg team would come out on top.

A jib problem on the final windward leg caused a minor drama for the Smeg crewmen who had to make a quick ‘repair’ so they could retain their position to the Rose Bay mark. Once they had turned for home the problem was solved as the big red spinnaker pulled them through to finish second behind the brilliant Appliancesonline.com.au skiff.

It was a brilliant win for the Appliances crew who were sailing their first race together since the JJ Giltinan Championship earlier this year.

Skipper Dave Witt returned from Hong Kong just in time for today’s race, and with the professional crew work of Tom Clout and Tom Anderson, the team was outstanding as they powered away to win by 2m28s from Smeg.

A big sail Easterly was a welcome change from the many strong winds the fleet have had to battle over the first few weeks of the season.

Thurlow Fisher Lawyers won the start and led the fleet from Smeg and Appliancesonline on the long windward leg from Robertson Point to Rose Bay.

As the fleet approached the Rose Bay mark, Witt and his team outsailed the opposition and grabbed a 30s lead from Smeg, Thurlow Fisher Lawyers and Noakesailing as spinnakers were set for the spinnaker run to the wing mark off Clark Island and the bottom mark at Kurraba Point.

The run was uneventful but Appliancesonline showed good speed with the large sail area to extend the leading margin to 45s.

The race for second place behind the leader was close as Smeg retained her second placing just ahead of Thurlow Fisher Lawyers, Asko Appliances, Compassmarkets.com (Keagan York) and Noakesailing.

Witt and his team applied a loose cover on the challengers up the second work and continued to show great speed off the breeze to gain another one minute over the fleet on the second lap of the course.

With the winner well ahead over the final lap of the course, the race behind her was extremely close with up to six skiffs battling for the minor placings.

Today’s win by Appliancesonline was even more impressive as the team only put the new mast and sails on the boat for the first time today.

Dave Witt is one of the most experienced sailors on the planet, but even he was impressed by the way the boat performed.

“It was very encouraging, particularly as we only put it all together just before the race. Sailing with the two Toms again and winning was especially pleasing and I can’t remember ever having a win on the day we put a brand new rig in the boat.

“We felt our performances at the 2016 JJ Giltinan Championship were really good but we had a problem in those conditions.  So we bought the new rig and its looking good after the way it went today.”

Next Sunday’s race is for the Yandoo Trophy. The Australian 18 Footers League will have its usual Spectator Ferry available to follow all the action. The Spectator Ferry is also available throughout the entire 2016-2017 Season, leaving Double Bay Wharf, alongside the clubhouse, at 2.15pm.