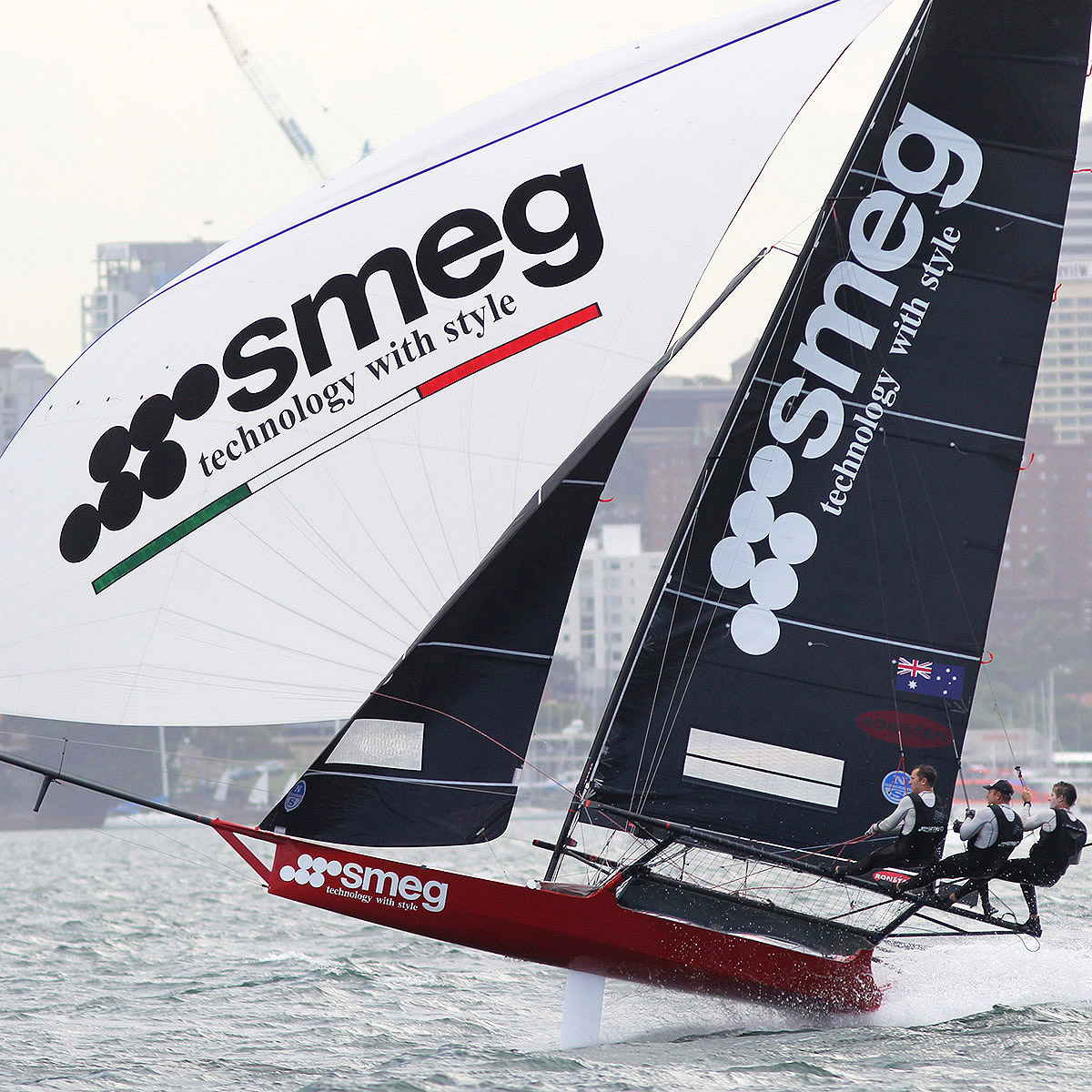 Smeg was flying on her way to victory in Race 4.

Australia’s Smeg team of Michael Coxon, Ricky Bridge and Mike McKensey starred on Day 3 of the Winning Group 2019 JJ Giltinan Championship with a win and third placing in the two races today, to move into clear second placing after four races of the regatta.

Smeg led early in the race but the skiff hit a wave, fell into a lull, and had to make a good save to stay in contention with the leading group.

The loss of momentum sent the skiff back into seventh place at the bottom mark before the team came back through the fleet to finish third, 20s behind Honda Marine.

Winning Group (John Winning Jr., Sam Newton, Seve Jarvin) held the lead at the windward mark from Smeg, C-Tech and ASCC (Josh Porebski, Jack Simpson, Dave Hazard) in Race 3, but it was the two kiwi teams, C-Tech and Honda Marine, which dominated the spinnaker run back to the bottom mark off Clark Island.

At the windward mark on the second lap, C-Tech was 15s ahead of Honda Marine, and despite a strong challenge from Honda, C-Tech held on for the narrow 10s victory.

The NE breeze freshened a couple of knots for Race 4 and the Smeg team gave the fleet no chance as the skiff raced ahead at every mark to defeat fellow Australian team, Winning Group, by 31s, with ASCC a further 12s back in third place.

After being granted redress and average points for the incident in Race 2, Winning Group’s position become more complicated on the pointscore board.

With two more races to be sailed tomorrow, and a 20-knots SSE wind predicted, the racing is certain to continue to excite the spectators and the changes on the leader board could continue.

The club will have a spectator ferry following each days' racing, leaving Double Bay Public Wharf at 2pm.

NOTE: THERE WILL BE TWO SPECTATOR FERRIES NEXT SUNDAY MARCH 10

Live streaming coverage will feature pre-race interviews, which will go to air at 2.15pm.