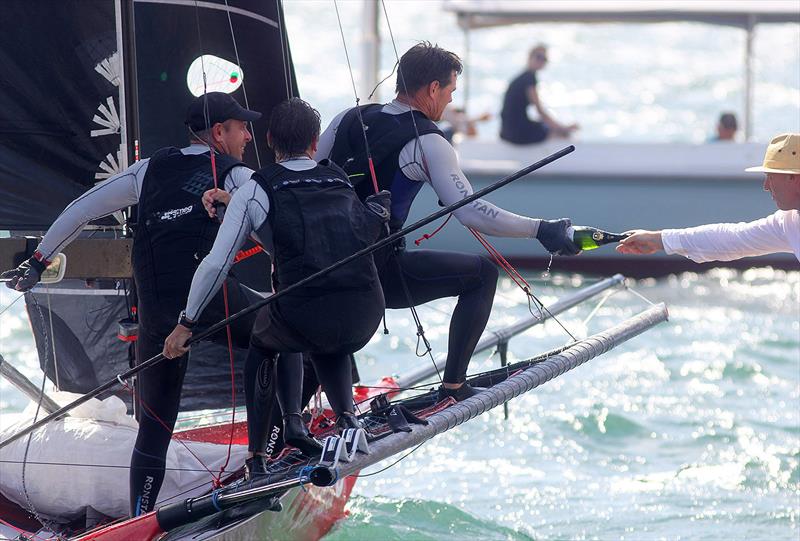 A second-place finish in today’s Race 8 on Sydney Harbour was enough to give the Smeg team of Michael Coxon, Ricky Bridge and Trent Barnabas, an unbeatable points lead and victory in the 2021 JJ Giltinan 18ft Skiff Championship sponsored by the Winning Group.

It is skipper Michael Coxon’s fourth victory in the 83-year history of the championship. For sheet hand Ricky Bridge, it is his second title at the JJs, and it is the fifth for bowman Trent Barnabas.

While the championship belongs to Smeg, the belonged to the tech2 team of Jack Maacartney, Charlie Wyatt and Lewis Brake.

Following a disappointing week of racing for the Australian champion tech2 team, it was back to business as usual again as the crew gave a faultless exhibition to score a brilliant 1m35s victory over Smeg in the 17-21 knot north-east wind.

Smeg had trailed tech2 and Noakesailing at the final windward mark but the new champ put on a high speed performance to grab Noakesailing on the spinnaker run between Shark Island and the finish line off Clark Island and take second place by just 5s.

It was another very good performance by the Noakesailing team (Sean Langman/Ed Powys/and Josh Porebski) which has been consistent throughout the entire regatta.

With the final race of the championship to be sailed tomorrow, the present point scores are: Smeg on 13, Yandoo Winning Group on 27, Noakesailing 30, Shaw and Partners Financial Services 34, tech2 on 37, Andoo 38, and Bird and Bear on 40.

Right from the start, tech2 was at the head of the fleet and led for almost the entire long beat to the windward mark at the Beashel Buoy, but it was Noakesailing which held a 12s advantage as the fleet rounded the mark and set off for the wing mark off the southern end of Shark Island.

Smeg was in third place, 30s from the lead, followed by Yandoo, Bird and Bear, Finport Finance and Shaw & Partners.

The fleet put on a spectacular exhibition of speed sailing under spinnakers, despite some close moments with several other classes and cruise craft which were scattered over the NE course.

tech2’s speed was awesome and the team soon grabbed the lead from Noakesailing and opened up a clear break on the fleet at the bottom mark.

On the second beat to the Beashel Buoy, tech2’s crew continued to favour the left hand side of the course and showed the same teamwork they have shown for most of the season as they powered away to a 45s lead before the spinnaker run back down the middle of the harbour to the bottom mark off Clark Island.

Noakesailing was still in second place ahead of Smeg with Winning Group, Shaw & Partners and Finport Finance rounding out the top six.

Over the final lap of the course, tech2 had extended her lead to 1m5s over Noakesailing at the Beashel Buoy.

The spinnaker run to the finish produced some incredible rides for the teams and thrilled the spectator fleet as the skiffs raced across the finish line at top speed.

Race 9, the final of the Championship, will be sailed Sunday, March 14.

For those unable to make it out onto the water, the Club’s live broadcast team will be on Sydney Harbour to capture all the action. Livestreaming is available at www.18footers.com by clicking on the ’18 Footers TV’ link