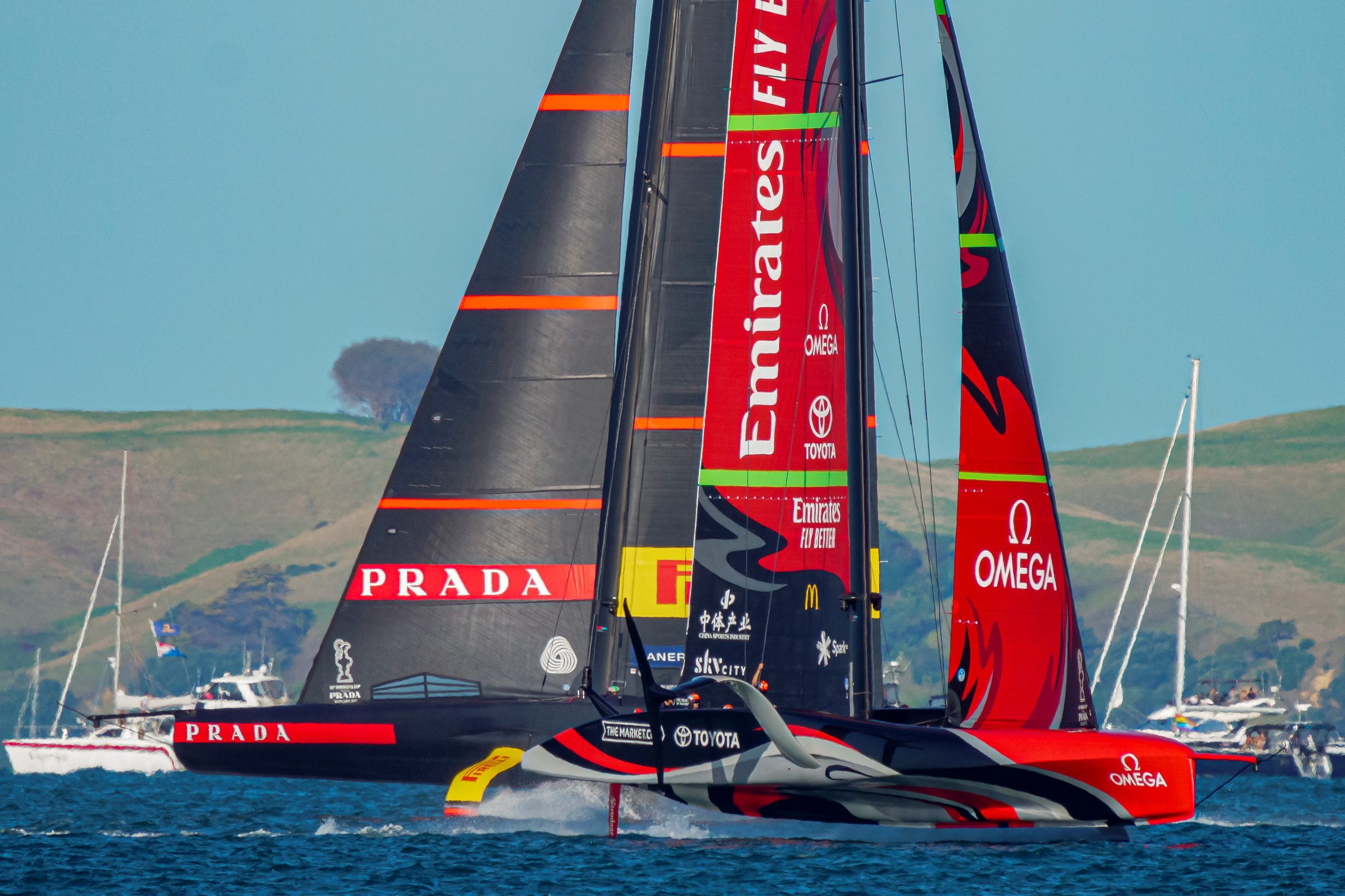 Light winds were forecast out on course A, which gave the Defender and Challenger plenty to think about. With just seconds and centimetres making all the difference – particularly in the all-important pre start, This America’s Cup is all about who can hold their nerve – and who blinks first.

Race 5
With Emirates Team New Zealand entering the start box on port, they controlled their turn time back to the line. Luna Rossa Prada Pirelli were able to sail slower on their bigger foils, and maintain momentum to cross on time, heading out to the favoured left-hand side.

Emirates Team New Zealand had struggled to stay foiling, dropping down, slowing the boat and were late to the line. They then peeled off to the right, looking for clean air and the chance to make gains.

Unfortunately, with the spectator fleet on the right-hand side affecting the light sea breeze, the left-hand side going upwind was favoured, with an extra knot of clear breeze. Luna Rossa Prada Pirelli owned it, playing the cards they had, coming back in and tacking on Emirates Team New Zealand right on the centre of the course, forcing them back to the less favoured right-hand side.

The options were few for the Cup Defenders, but they stuck at it, hoping to pick up metres on the downwind – and this they did but once again steady and light conditions allowed for limited overtaking lanes. Emirates Team New Zealand pushed boundary to boundary, hoping for leverage and acceleration, reducing the deficit at the finish line to 18 seconds, but it wasn’t enough against a polished opposition.

“We did a very good job on the start – again an important part of the race, and then we did some very clean manoeuvres, so yes the start – but the clean way we sailed after that was the key for us in these tricky conditions,” Bruni said.

And for Emirates Team New Zealand helmsman Peter Burling, his comments between the races, revealed a painful start to Race 5. “We obviously just fell off the foils above them and thought we had a little more time to kill in the start box than we did – and so we didn’t manage to take off and get going.

“From there they shut the race down pretty well. We fought hard, getting closer at the finish but they didn’t give us too many options. What we have to do now is try to tidy up that little detail in the start.”

Race 6
Luna Rossa Prada Pirelli held the key options in the starting box, coming in on the favoured port side, and whilst trying to sail slower on their foils after they gybed back in from the boundary, they hit a light spot – and stalled.

Peter Burling onboard Emirates Team New Zealand certainly tidied up his pre-start details and sailing supremely under pressure he tacked back in from the boundary, sailed high, then pulled the trigger perfectly diving down to nail the start leaving Luna Rossa Prada Pirelli 50 metres behind and 10 knots slower.

Punching out quickly to a 160 metre lead, the crew onboard Te Rehutai looked like they had a straightforward job of staying ahead of the Italians, but the light afternoon sea breeze started to develop significant gaps in it – and as we saw in yesterday’s racing, one bad gybe or a splashdown in these fickle conditions can be an immediate game changer.

Rounding the first gate close to 400 metres ahead, Emirates Team New Zealand worked the conditions beautifully avoiding any holes in the breeze, staying up high and sailing fast. On the final upwind leg, ETNZ was so far ahead their manoeuvres had no strategic effect on LRPP, and Burling, Tuke and Ashby kept it tight and clinical whilst sailing their own race, finishing close to 1400 metres and 1.41 ahead of the Italians.

Co-helm on Luna Rossa, Jimmy Spithill, revealed the key moment of Race 6.” We just got caught in a real light spot in the pre start and we couldn’t get the boat going back to the line. It was a bit of a minefield out there – especially in the start box, which was unfortunate and then it was too big a jump for us to get back into the race.”

After levelling the scores to 3-3, ETNZ Flight Controller, Blair Tuke, elaborated on the wider teams’ involvement in the start.

“A really good reply from the guys and a great way to finish another tight day! Pete and I are to windward at the start with a somewhat restricted view, and so looking down to leeward, Josh Junior and Andy Maloney called the start beautifully.

“With our grinding guys there is a huge effort in the light air days – so plenty of heavy lifting plus key input from the grinders.”

Coming in to the finish to take race 6 and tie the scores at 3-3, Emirates Team New Zealand after guard Glenn Ashby summed up the battle for the 36th America’s Cup presented by Prada with three words, “The regatta starts tomorrow.”